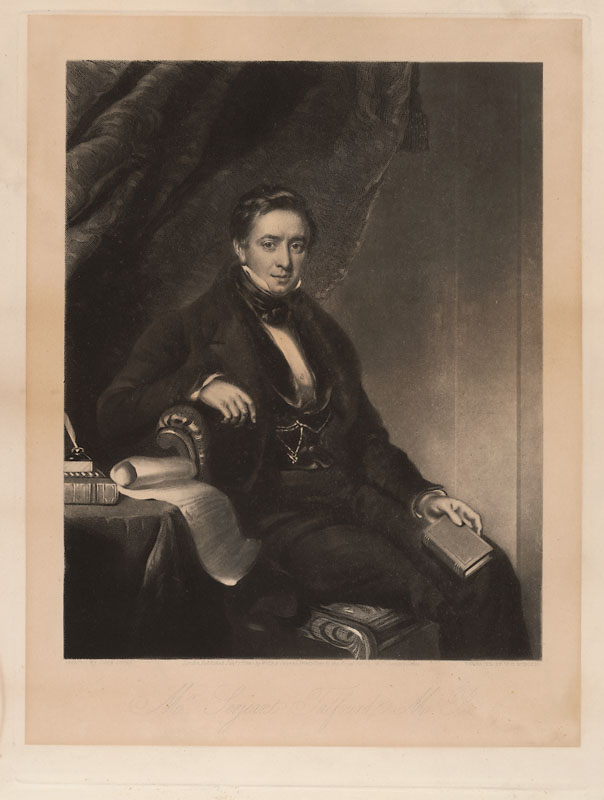 The son of a well-to-do brewer, he was born at (not, as is sometimes stated, at Doxey, near Stafford).

He received his early education at , and at the Reading grammar school. At the age of eighteen he was sent to London to study law under Joseph Chitty, the . Early in 1821 he joined the Oxford circuit, having been called to the bar earlier in the year. When, fourteen years later, he was created a , and when again he in 1849 succeeded Mr. Justice Coltman as judge of the Court of Common Pleas, he earned these distinctions more by his laborious care in the conduct of cases than for his brilliance in court.

In his early years in London Talfourd was dependent in great measure on his literary contributions. He was then on the staff of the "London Magazine", and was an occasional contributor to the "Edinburgh Review" and "Quarterly Review", the "New Monthly Magazine", and other periodicals; on joining the Oxford circuit, he acted as law reporter to "". His legal writings on literary matters are excellent expositions, animated by a lucid and telling, if not highly polished, style. Among the best of these are his article "On the Principle of Advocacy in the Practice of the Bar" (in the "Law Magazine", January 1846); his "Proposed New Law of Copyright of the Highest Importance to Authors" (1838); "Three Speeches delivered in the House of Commons in Favour of an Extension of Copyright" (1840); and his famous "Speech for the Defendant in the Prosecution, the Queen v. Moxon, for the Publication of Shelley's Poetical Works" (1841).

Talfourd had no position among men of letters until the production of his tragedy "Ion", privately printed in 1835 and produced the following year at theatre. The tragedy was also well received in America, and was reproduced at in December 1861. This dramatic poem, its author's masterpiece, turns upon the voluntary sacrifice of Ion, king of , in response to the c oracle, which had declared that only with the extinction of the reigning family could the prevailing pestilence incurred by the deeds of that family be removed.

Two years later, at the , "The Athenian Captive" was acted with moderate success. In 1839 ", or the Fate of the Macdonalds", was privately printed, and in 1840 it was produced at the Haymarket; but this home drama is inferior to his two classic plays. The "Cash/ian" (1853) did not excite much interest. Before this he had produced various other prose writings, among them his History of Greek Literature, in the "Encyclopaedia Metropolitana".

Talfourd died in 1854 in court at during the performance of his judicial duties [GRO Register of Deaths: MAR 1854 6b 13 STAFFORD - Sir Thomas Noon Talfourd, age unspecified] . Dickens was amongst the mourners at his funeral at .