Taylor Hanson (born Jordan Taylor Hanson; March 14, 1983) is an American musician best known as a member of the pop rock band Hanson.[1] He sings both lead and back-up vocals, and plays keyboard, percussion (including drums, bongos and the tambourine), guitar, harmonica, and piano. He is also the lead singer of supergroup Tinted Windows.

Taylor sings and plays keyboard and the piano with the band Hanson. He and his older brother, Isaac, started the band with younger brother Zac in 1992, and were initially known as The Hanson Brothers (later changed to just 'Hanson'). At the time, Isaac was eleven, Taylor was nine, and Zac was six. They performed as an a cappella group outside clubs in their hometown of Tulsa. On May 6, 1997, the band released their first major studio album, Middle of Nowhere, with Mercury Records. The first single, "MMMBop", made it to number one on the Billboard Hot 100 chart. May 6th has been declared "Hanson Day" in Tulsa in honor of the release of Middle of Nowhere.

Taylor Hanson is a co-founder and co-CEO of 3CG Records, along with brothers Isaac and Zac Hanson.

It was announced in early 2009 that Taylor, along with former Smashing Pumpkins guitarist James Iha, Cheap Trick drummer Bun E. Carlos and Fountains Of Wayne bassist Adam Schlesinger, formed a new band called Tinted Windows. The band played their first publicized gig at SXSW in Austin, Texas on March 20, 2009. Their first album was released on April 21, 2009.[2][3] 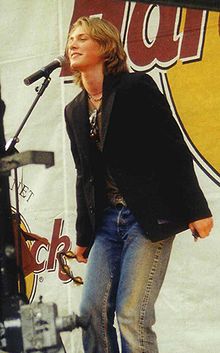 Taylor met his wife, Natalie Anne Bryant (born December 28, 1983), after a performance in Atlanta, Georgia in August 2000, during Hanson's This Time Around Tour. They were introduced by one of the band's roadies. After dating for two years, 19-year-old Taylor and Natalie, then 18, were married on June 8, 2002 at the Ida Cason Chapel in Pine Mountain, Georgia. Natalie was already four and a half months pregnant with their first child, Ezra.[4] The couple currently has four children: Jordan Ezra (October 31, 2002), Penelope Anne (April 19, 2005), River Samuel (September 4, 2006), and Viggo Moriah (December 9, 2008).[5]