Moyamensing was originally a township on the fast land of the Neck, lying between Passyunk and Wicaco.[1] It was incorporated into the Philadelphia County, Pennsylvania and is today primarily a neighborhood in the South Philadelphia section of Philadelphia, Pennsylvania, United States.[2] 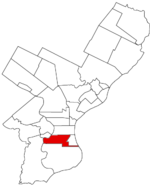 Map of Philadelphia County, Pennsylvania highlighting Moyamensing District prior to the Act of Consolidation, 1854

The tract was granted by the Dutch West India Company Lieutenant Alexander d'Hinoyossa, Vice-Director of New Amstel to Martin Clensmith, William Stille and Lawrence Andries.[3] In 1684, when the land was turned over from the Dutch to the English, the title was given by William Penn to William Stille, Lassey Andrews, Andrew Bankson and John Matson.[4]

The Moyamensing Prison was built between 1822-1835 at Reed and 10th Streets. A portion of it also housed a Debtors Prison. The structure was demolished in 1967.[7]