Dolichovespula maculata is a North American insect commonly called the bald-faced hornet (or white-faced hornet or white-tailed hornet). Its well-known features include its hanging paper nests and the females' habit of defending them with repeated stings.[1]

It belongs to a genus of wasps called yellowjackets in North America, but is not called that because it lacks yellow coloring. Instead, it is called a hornet in the American sense of a wasp that builds paper nests, especially one of the subfamily Vespinae.[2]

The bald-faced hornet lives throughout North America, including southern Canada, the Rocky Mountains, the western coast of the United States, and most of the eastern US. They are most common in the southeastern United States. They are best known for their large football-shaped paper nest, which they build in the spring for raising their young. These nests can sometimes reach 3 feet tall. Bald-faced hornets are protective of their nests and will sting repeatedly if the nest is physically disturbed. They are more aggressive than both the wasps normally called yellowjackets and members of the Vespa genus, and it is not considered safe to approach the nest for observation purposes. The bald-faced hornet will aggressively attack with little provocation.

Every year, queens that were born and fertilized at the end of the previous season begin a new colony. The queen selects a location for its nest, begins building it, lays a first batch of eggs and feeds this first group of larvae. These become workers and will assume the chore of expanding the nest — done by chewing up wood which is mixed with a starch in their saliva. This mixture is then spread with their mandibles and legs, drying into the paper-like substance that makes up the nest. The workers also guard the nest and feed on nectar, tree sap and fruit pulp. They also capture insects and arthropods, which are chewed up to be fed to the larvae. In addition, Bald-Faced Hornets have been observed scavenging raw meat. This continues through summer and into fall. Near the end of summer, or early in the fall, the queen begins to lay eggs which will become drones and new queens. After pupation, these fertile males and females will mate, setting up next year's cycle of growth. 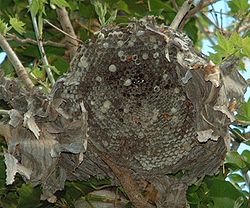 As winter approaches, the wasps die – except any just-fertilized queens. These hibernate underground, under logs or in hollow trees until spring. The nest itself is generally abandoned by winter, and will not be reused. When spring arrives, the young queens emerge and the cycle begins again.

Bald-faced hornets visit flowers, especially in late summer, and can be minor pollinators.

Like other social wasps, bald-faced hornets have a caste system made up, in one nest, of the following: