The Chickasaw Turnpike is a short two-lane toll road that is located in the rural south central region of the U.S. state of Oklahoma. It stretches for 17.3 miles (27.8 km)[2] from west of Sulphur to just south of Ada. The Oklahoma Turnpike Authority (OTA) owns, maintains, and collects tolls on the turnpike. The first section of the Chickasaw Turnpike opened on September 1, 1991.

The Chickasaw resulted from a compromise between urban and rural legislators. Originally, it was part of a now-canceled plan to connect southern and eastern Oklahoma with a longer turnpike. It was also intended to link Ada to the Interstate system. OTA is negotiating an agreement to transfer all or part of it to the Oklahoma Department of Transportation (ODOT), making it a toll-free road.

The Chickasaw Turnpike takes a southwest-to-northeast route, passing through only two counties, Murray and Pontotoc. The turnpike begins in Murray County at State Highway 7 west of Sulphur. It then crosses over U.S. Highway 177 north of Sulphur. U.S. 177 has a partial diamond interchange with the Chickasaw Turnpike, allowing movements from U.S. 177 to the turnpike's eastbound lane, and from the westbound turnpike to U.S. 177. The turnpike continues northeast into Pontotoc County. Just north of the county line is a barrier toll plaza, the only plaza along the route. Beyond the tollbooth lies an interchange serving the town of Roff. Again, this is a partial interchange, providing access to Roff for eastbound travelers and access to the westbound lanes from Roff.[2] The Chickasaw Turnpike then ends at State Highway 1.

The Chickasaw Turnpike has only two lanes for the majority of its length; however, there is a short passing lane eastbound. The Chickasaw is the only two-lane turnpike in Oklahoma. Lightly traveled, the road is used by about 2,000 vehicles per day.[3] 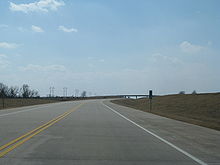 The Chickasaw Turnpike westbound at Mile 13

The Chickasaw Turnpike was originally envisioned as a corridor running from Interstate 35 near Davis, Oklahoma to I-40 near Henryetta.[3] Proposed by southern Oklahoma politicians, the turnpike was intended to promote economic development by connecting Ada to the Interstate Highway system.[4] It was proposed at the same time as three other turnpikes, which would become the Kilpatrick Turnpike in Oklahoma City, the Creek Turnpike in Tulsa, and the Cherokee Turnpike, which bypassed a mountainous section of U.S. Highway 412 in eastern Oklahoma. Rural legislators objected to the Kilpatrick and Creek Turnpikes, and moved to block them unless the Chickasaw Turnpike was built.[5] Urban legislators relented and allowed the Chickasaw to be built as part of a compromise,[6] with legislation requiring that the Chickasaw be built before work on the other two turnpikes could begin.[7] The turnpike was authorized in 1987.[1]

Governor Henry Bellmon opposed the Chickasaw Turnpike, arguing it would be a money loser.[4] Bellmon had the turnpike built with only two lanes and shortened it to its current termini.[4] Dewey F. Bartlett, Jr., an OTA board member, was later quoted as saying "I think it stinks. We never wanted to build it. It was not anything we thought was appropriate. But in order to build the three turnpikes that were necessary, that is the only way they would build it."[5] 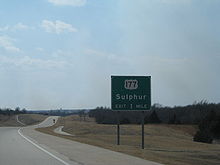 Signage for the exit at Sulphur

Bonds for the first section were approved in 1989.[1] The bonds specifically permitted the turnpike to be transferred to the Oklahoma Department of Transportation and become a free road, the only turnpike in Oklahoma eligible for this type of transfer.[6] At the time, however, ODOT director Bobby Green said that his agency could not buy the turnpike due to a lack of funds.[8] The Chickasaw cost nearly $44 million to build,[3] equivalent to nearly $70 million in 2008.[9] Its first section opened on 1991-09-01.[1] As part of his 1994 turnpike package, Governor David Walters proposed expanding the Chickasaw Turnpike to four lanes and extending it to Henryetta.[4] The Chickasaw improvements were eventually cut from the package, which ultimately died in committee.

The OTA voted on November 11, 2002 to open discussions about transferring the Chickasaw to ODOT. The transfer would also include a one-time payment of $14 million for maintenance.[10][11] The turnpike had deteriorated since its original construction: ODOT director Gary Ridley said that recurrent pavement problems necessitated constant repairs. He also mentioned that there were other issues, such as right-of-way problems, that could endanger ODOT's ability to draw from the federal highway trust fund.[12] House Speaker Pro Tempore-designate Danny Hilliard opposed the transfer on the grounds of the road's poor condition, as well as objecting to the partial interchanges. The lawmaker called the Chickasaw Turnpike "an albatross" and said "I told them that unless the Turnpike Authority brought that turnpike up to ODOT specifications, and completed the interchanges at Roff and U.S. 177 north at Sulphur [sic], we're not interested in having that thing dumped on the taxpayers."[3]

To address these concerns, OTA began a $12.8 million[13] pavement rehabilitation project on 2006-02-09.[14] Construction constraints required the entire turnpike to be closed in March,[14] causing traffic problems in Sulphur.[13] The Turnpike reopened on September 29, 2006.[13] The Oklahoma Transportation Commission, which oversees ODOT, voted on 2007-08-06 to begin feasibility and cost–benefit analysis studies towards accepting the 4 miles (6.4 km) of the turnpike between SH-7 and U.S. 177.[6] 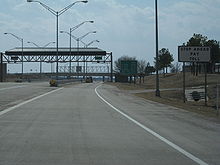 As of 2009, passengers of two-axle vehicles (such as cars and motorcycles) pay tolls of 65¢ in cash or 55¢ if Pikepass is used. Drivers in vehicles with more than two axles, such as truckers, pay higher tolls. Tolls are collected at the single barrier toll plaza between the U.S. 177 and Roff interchanges. Due to the partial interchanges, it is not possible to legally use the turnpike without passing through this toll plaza. The toll is the same regardless of the point of entry or exit.[15]

The Chickasaw Turnpike has been fully automated since shortly after it opened.[16] As Governor Bellmon predicted, it has been a consistent money loser since opening.[6] Improvements are funded largely through proceeds from the more profitable Turner and Will Rogers Turnpikes.[4]

All exits are unnumbered.