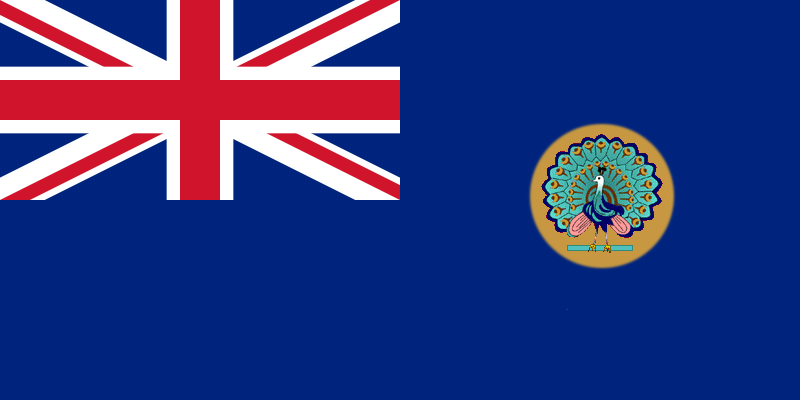 British rule in Burma lasted from 1824 to 1948, from the through the creation of "Burma Province" as a colony of to the establishment of the "Crown Colony of Burma" and finally . Various portions of Burmese territories, including Arakan, Tenasserim were conferred to the British after British victory in . was annexed by the British in 1852 after the . The British-acquired territories were designated a province in 1862. After the in 1885, was annexed.

The arose from friction between in western Burma and British-held to the north. After Burma's defeat of the Kingdom of Arakan in 1784-1785, in 1823, Burmese forces again crossed the frontier and the British responded with a large seaborne expedition that took without a fight in 1824. In , south of , the Burmese general was killed and his armies routed. The 1826 formally ended the First Anglo-Burmese War. British-led Indian troops suffered more than 15,000 fatalities.

After 25 years of peace, the British and Burmese fighting started afresh, and lasted until the British occupied all of .

King Mindon tried to readjust to the thrust of imperialism. He enacted administrative reforms and made Burma more receptive to foreign interests. But the British effected the , which lasted less than two weeks during November 1885.

British troops entered on 28 November 1885 and Burma was attached to the British Empire on 1 January 1886.

Burmese armed resistance continued sporadically for several years, and the British commander had to coerce the High Court of Justice to continue to function. The British decided to annex all of as a colony, and to make the whole country a province of the Indian Empire. The new colony of Upper Burma was attached to the Burma Province on 26 February 1886. Rangoon, having been the capital of British Lower Burma, became the capital of the province.

Britain made Burma a province of India in 1886 with the capital at Rangoon and ushered in a new period of economic growth. Traditional Burmese society was drastically altered by the demise of the monarchy and the separation of religion and state. Though war officially ended after only a couple of weeks, resistance continued in northern Burma until 1890, with the British finally resorting to a systematic destruction of villages and appointment of new officials to finally halt all guerrilla activity. Intermarriage between Europeans and Burmese gave birth to an indigenous community know as the who would come to dominate the colonial society, hovering above the Burmese but below the British. The economic nature of society also changed dramatically. After the opening of the , the demand for Burmese rice grew and vast tracts of land were opened up for cultivation. However, in order to prepare the new land for cultivation, farmers were forced to borrow money from Indian moneylenders called at high interest rates and were often foreclosed on and evicted losing land and livestock. Most of the jobs also went to indentured Indian labourers, and whole villages became outlawed as they resorted to 'dacoity' (armed robbery). While the Burmese economy grew, all the power and wealth remained in the hands of several British firms and migrants from India. The civil service was largely staffed by Anglo-Burmese and Indians, and Burmese were excluded almost entirely from military service, which was staffed primarily with Indians, Anglo-Burmese, and other Burmese minority groups. Though the country prospered, the Burmese people failed to reap the rewards. (See 's novel "" for a fictional account of the British in Burma.)

By the turn of the century, a nationalist movement began to take shape in the form of Young Men's Buddhist Associations (YMBA), modelled after the , as religious associations were allowed by the colonial authorities. They were later superseded by the General Council of Burmese Associations (GCBA) which was linked with "Wunthanu athin" or National Associations that sprang up in villages throughout Burma Proper.

In 1920 the first university students' strike in historyFact|date=April 2007 broke out in protest against the new University Act which the students believed would only benefit the elite and perpetuate colonial rule. 'National Schools' sprang up across the country in protest against the colonial education system, and the strike came to be commemorated as ''. There were further strikes and anti-tax protests in the later 1920s led by the "Wunthanu athin"s. Prominent among the political activists were Buddhist monks ("hpongyi"), such as U Ottama and U Seinda in the Arakan who subsequently led an armed rebellion against the British and later the nationalist government after independence, and U Wisara, the first martyr of the movement to die after a protracted hunger strike in prison. (One of the main thoroughfares in is named after U Wisara.) In December 1930, a local tax protest by in Tharrawaddy quickly grew into first a regional and then a national insurrection against the government. Lasting for two years, the "Galon" rebellion, named after the mythical bird - enemy of the Nagas i.e. the British - emblazoned on the pennants the rebels carried, required thousands of British troops to suppress along with promises of further political reform. The eventual trial of Saya San, who was executed, allowed several future national leaders, including Dr and , who participated in his defence, to rise to prominence.

May 1930 saw the founding of the "" (We Burmans Association) whose members called themselves "Thakin" (an ironic name as "thakin" means "master" in the Burmese language&mdash;rather like the Indian 'sahib'&mdash; proclaiming that they were the true masters of the country entitled to the term usurped by the colonial masters). The second university students strike in 1936 was triggered by the expulsion of and Ko Nu, leaders of the Students Union (RUSU), for refusing to reveal the name of the author who had written an article in their university magazine, making a scathing attack on one of the senior university officials. It spread to leading to the formation of the All Burma Students Union (ABSU). Aung San and Nu subsequently joined the Thakin movement progressing from student to national politics.

The British separated Burma Province from British India in 1937 [ [http://www.time.com/time/magazine/article/0,9171,788006,00.html Sword For Pen] , "", April 12, 1937] and granted the a new constitution calling for a fully elected assembly, with many powers given to the Burmese, but this proved to be a divisive issue as some Burmese felt that this was a ploy to exclude them from any further Indian reforms whereas other Burmese saw any action that removed Burma from the control of India to be a positive step. served as the first prime minister of Burma, but he was forced out by in 1939, who served as prime minister from 1940 until he was arrested on 19 January 1942 by the British for communicating with the Japanese.

A wave of strikes and protests that started from the oilfields of central Burma in 1938 became a general strike with far-reaching consequences. In student protesters, after successfully picketing the Secretariat, the seat of the colonial government, were charged by the British mounted police wielding batons and killing a student called Aung Kyaw. In , the police shot into a crowd of protesters led by Buddhist monks killing 17 people. The movement became known as "Htaung thoun ya byei ayeidawbon" (the '1300 Revolution' named after the Burmese calendar year), and 20 December, the day the first martyr Aung Kyaw fell, commemorated by students as ''. [cite web|url=http://www.burmalibrary.org/reg.burma/archives/199912/msg00642.html|title=The Statement on the Commemoration of Bo Aung Kyaw|publisher=All Burma Students League|year=Dec 19 1999|accessdate=2006-10-23]

The Frontier Areas, also known as the Excluded Areas or the Scheduled Areas, compose the majority of states within today. They were administered separately by the British, and were united with Burma Proper to form Myanmar's geographic composition today. The Frontier Areas were inhabited by ethnic minorities such as the the Shan, the and the Karenni.

From the Japanese surrender to Aung San's assassination

The surrender of the Japanese brought a military administration to Burma and demands to try Aung San for his involvement in a murder during military operations in 1942. Lord Mountbatten realized that this was an impossibility considering Aung San's popular appeal. After the war ended, the British Governor, Sir returned. The restored government established a political programme that focused on physical reconstruction of the country and delayed discussion of independence. The AFPFL opposed the government leading to political instability in the country. A rift had also developed in the AFPFL between the Communists and Aung San together with the Socialists over strategy, which led to Than Tun being forced to resign as general secretary in July 1946 and the expulsion of the CPB from the AFPFL the following October. Dorman-Smith was replaced by Sir as the new governor, and almost immediately after his appointment the Rangoon Police went on strike. The strike, starting in September 1946, then spread from the police to government employees and came close to becoming a general strike. Rance calmed the situation by meeting with Aung San and convincing him to join the Governor's Executive Council along with other members of the AFPFL. The new executive council, which now had increased credibility in the country, began negotiations for Burmese independence, which were concluded successfully in as the -Atlee Agreement on 27 January 1947. The agreement left parts of the communist and conservative branches of the AFPFL dissatisfied, however, sending the Red Flag Communists led by underground and the conservatives into opposition. Aung San also succeeded in concluding an agreement with ethnic minorities for a unified Burma at the on 12 February, celebrated since as 'Union Day'. [cite web|url=http://www.ibiblio.org/obl/docs/panglong_agreement.htm| title=The Panglong Agreement, 1947|publisher=Online Burma/Myanmar Library] Shortly after, rebellion broke out in the Arakan led by the veteran monk U Seinda, and it began to spread to other districts. The popularity of the AFPFL, now dominated by Aung San and the Socialists, was eventually confirmed when it won an overwhelming victory in the April 1947 constituent assembly elections.

Then a momentous event stunned the nation on 19 July 1947. , a conservative pre-war Prime Minister of Burma, engineered the assassination of Aung San and several members of his cabinet including his eldest brother , the father of today's exile-government leader Dr , while meeting in the Secretariat. [cite web|url=http://www.irrawaddy.org/database/1997/vol5.4.5/aungsan.html|title=Who Killed Aung San? - an interview with Gen. Kyaw Zaw|month=August | year=1997|publisher="The Irrawaddy"|accessdate=2006-10-30] July 19 has been commemorated since as Martyrs' Day. , the Socialist leader, was now asked to form a new cabinet, and he presided over Burmese independence on 4 January 1948. The popular sentiment to part with the British was so strong at the time that Burma opted not to join the British Commonwealth, unlike India or Pakistan.

Head of the Burmese Administration

The Premiership was left empty during Japanese occupation in . was defacto Prime Minister from 1946 to 1947 during the return of civilian rule in .