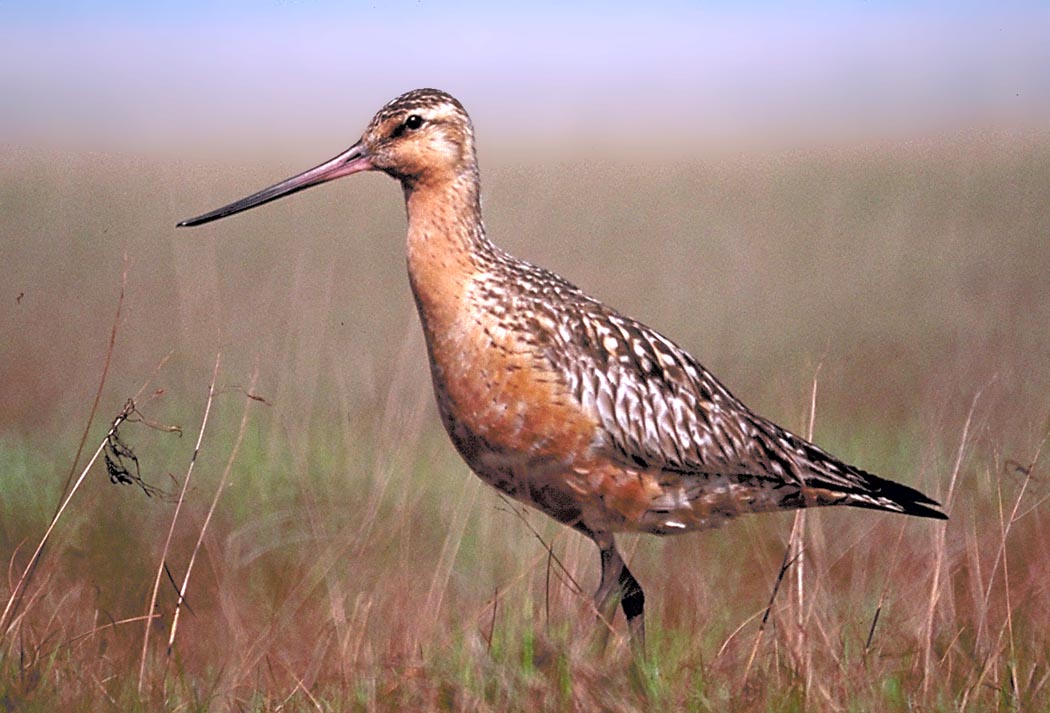 The Bar-tailed Godwit, "Limosa lapponica", is a large in the family , which breeds on coasts and tundra mainly in the , and winters on coasts in temperate and tropical regions of the Old World.

The Bar-tailed Godwit is a relatively short-legged species of . The bill-to-tail length is 37–41 cm, with a wingspan of 70–80 cm. Males average smaller than females but with much overlap; males weigh 190–400 g, while females weigh 260–630 g; there is also some regional variation in size (see subspecies, below). The adult has blue-grey legs and a very long dark bill with a slight upward curve and pink at the tip. The neck, breast and belly are unbroken brick red in breeding plumage, off white in winter. The back is mottled grey.

It is distinguished from the by its barred, rather than wholly black, tail and a lack of white wing bars. The most similar species is the .

There are three , listed from west to east:

It forages by probing on mudflats or in marshes. In short vegetation, it may pick up insects by sight. It mainly eats insects and crustaceans, but also parts of aquatic plants.

The breeding habitat is Arctic , and western on open . It nests on the ground, usually in short vegetation.

The Bar-tailed Godwit migrates in flocks to coastal western , , , and - where the sub-species "Limosa lapponica baueri" is called Kūaka in . [ Barrie Heather and Hugh Robertson, "The Field Guide to the Birds of New Zealand" ( revised edition), Viking, 2005] [ [http://www.birdingnz.co.nz/newzealandbirds.php?aid=139 New Zealand Birding Network Brings You The Best Of New Zealand Birding ] ]

In 2007, it was shown to undertake the longest non-stop flight of any bird. Using satellite tracking, birds in New Zealand were tagged and tracked to the in China. According to Dr. Clive Minton (Australasian Wader Studies Group) "The distance between these two locations is 9,575 km, but the actual track flown by the bird was 11,026 km. This is the longest known non-stop flight of any bird. The flight took approximately nine days. At least three other Bar-tailed Godwits also appear to have reached the Yellow Sea after non-stop flights from New Zealand." [ [http://www.werc.usgs.gov/sattrack/shorebirds/overall.html Shorebird Migration ] ]

One specific female of the flock, nicknamed "E7", flew onward from China to Alaska, and stayed there for the breeding season. Then on 29 August 2007, she departed on on a non-stop flight from the Avinof Peninsula in western Alaska, to the Piako River, near Thames New Zealand, setting a new known flight record of 11,570 km.

The Bar-tailed Godwit is one of the species to which the "Agreement on the Conservation of African-Eurasian Migratory Waterbirds" () applies.