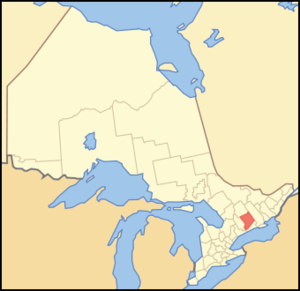 The county was founded as the District of Colborne in 1838, centred around Peterborough, which became the County of Peterborough in 1850. In 1862, the County was redivided into Haliburton County, Peterborough County, and Victoria County (now the City of Kawartha Lakes). The centre of the County was originally the courthouse, which is still considered an important historical site. The southern section of the county is mix of agriculture, urban and lakefront properties. The northern section of the county is mostly sparsely populated wilderness with numerous rivers and lakes, mostly within the recently expanded .

The county seat is Peterborough.

The County consists of eight townships:

The City of Peterborough is within the Peterborough County , but is separated from the county's administration.

The County contains the Lang Pioneer Village, and the Kawarthas are a major tourist region.

The county was named in honor of Col. Peter Robinson, who in 1825 brought 2,000 settlers from Ireland. The route taken was by way of Port Hope, Rice Lake and the Otonabee River, the same route used by the first settlers that entered this region in 1818.

* "Burleigh" and "Anstruther Townships", Taxable area, convert|32160|acre|sqmi km2|0. First settled in 1861. First Post Office was called Burleigh. Separated from Dummer Township in 1865.
* "Chandos Township", area convert|56225|acre|sqmi km2|0. Opened n 1862 and named from one of the title of the Duke of Buckingham (Grenville Family)

* "Harvey Township". Area convert|68755|acre|sqmi km2|0. Opened in 1821 and named after Sir John Harvey, Deputy Adjutant General in Canada during the War of 1812. Was part of Smith township until 1866. First settler were retired officers who come in 1832, but did not succeed.