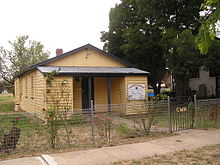 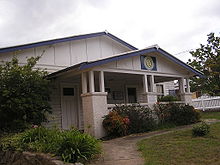 The Country Women’s Association of Australia (commonly abbreviated as CWA) is the largest women's organisation in Australia. It has 44,000 members across 1855 branches. Its aims are to improve the conditions for country women and children and to try to make life better for women and their families, especially those women living in rural and remote Australia. The organisation is self-funded, non-party-political and non-sectarian.

The Country Women's Association was formed in both New South Wales and Queensland in 1922. By 1936 there was a branch in each of the States and territories of Australia. The formation of a federal body was discussed in 1943 and was agreed in 1945 by a meeting of all state presidents. The First Annual Conference of the C.W.A. of Australia was held in Adelaide in 1946. In 1947 delegates were appointed to go to the Associated Country Women of the World Conference in Amsterdam.

During the depression years, the CWA helped those in need with food and clothing parcels. During World War II, the CWA provided meals for the troops at Quorn, South Australia and Tennant Creek, Northern Territory, their efforts being rated one of the best voluntary war time services in Australia. CWA members also made camouflage nets and knitted balaclavas and socks for the troops. In 1992, the CWA of Australia was awarded the RSL Anzac Peace Prize in recognition of their outstanding effort in promoting international understanding and contributing to world peace in accordance with best traditions exemplified by the ANZAC spirit.

The CWA awards student scholarships; as well as providing instruction and encouraging participation in the fields of drama, art, music, public speaking, cooking and floral art. The organisation runs workshops for older members on how to use computers, electronic banking and ATMs. Submissions are made to governments at all levels on a wide variety of social issues. Despite the organisation's involvement in a range of issues and activities, stereotypes persist, including the association with cooking, in particular scones.[1]

The CWA owns a range of properties built and maintained by members. In recent years there has been some controversy concerning the sale of the organisation's bush community halls. Some individual branches did not have enough members to continue paying for their upkeep, including council rates, insurance, electricity, water and maintenance. Nine halls were sold in New South Wales between 2003 and 2005, including halls at Cowra, Ettalong Beach and Jindabyne.[2].

They make nice jam, cakes and scones, as mentioned on Masterchef Australia[3]