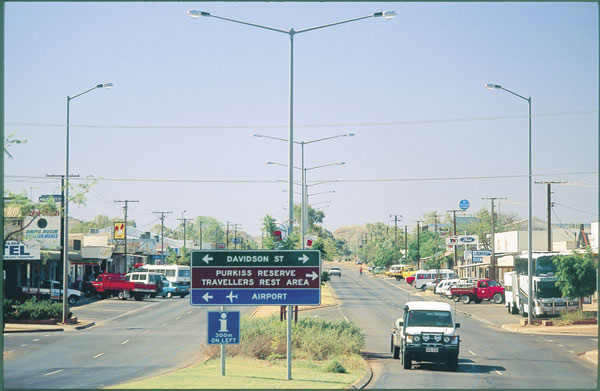 Tennant Creek is a town located in the of . It is the fifth largest town in the Northern Territory and it is located on the , just south of the intersection with the western terminus of the .

Tennant Creek is approximately 1000 kilometres south of the territory capital, Darwin, and 500 kilometres north of . The town is named after a nearby watercourse of the same name. At the 2001 census, Tennant Creek had a population of 3,185, of which 1,176 identified themselves as Aboriginal.

The Barkly tablelands run east from Tennant Creek towards the border and are among the most important cattle grazing areas in the . Roughly the same size as the or , the region consists largely of open grass plains and some of the world’s largest cattle stations. It runs as far south as , north above Elliott and west into the .

The region encompasses the junction of two great highways, the Barkly and the Stuart, also known as the Overlander and Explorer’s Ways. The Overlander's Way (Barkly Highway) retraces the original route of early stockmen who drove their cattle from Queensland through the grazing lands in the Northern Territory.

Most of the rain falls during the summer months, but occasional storms occur at other times of the year. Average annual rainfall is 426mm. Winter (May to October) in Tennant Creek is dry with cool nights and mornings. Summer November to April) is hot and dry with occasional rainfall. [ [http://www.tennantcreek.nt.gov.au Tennant Creek' Climate] ]

Tennant Creek has a warm with distinct wet and dry seasons. Most rain falls during the period from December to March, when temperatures are also at their highest. Temperatures fall during the dry months with sunny days and mild nights. There is 9.1 to 10.4 hours of sunshine per day with an average of 155 clear days per year. Prevailing winds are from the east to south-east.

Tennant Creek has developed from its rough, tough droving and gold mining days into a modern town with shops and a supermarket, accommodation, bars, clubs and restaurants, a major regional hospital, schools and banking facilities.

is a popular recreation spot, easily accessible from town by road or bicycle track and popular for swimming, barbecues, picnics or bush walks. The area’s best known attraction, the is 100 kilometres south of Tennant Creek and is one of the Territory's most photographed features. These huge boulders are scattered through a wide, shallow valley. The formations provide shelter to a variety of flora and fauna of the area and glow a rich red in the light of the early evening. Local Aboriginal mythology holds that the boulders are the eggs of the Rainbow Serpent. (Note: This is an old not necessarily true depiction of the story. Since joint management of the parks, and with consultation with the 4 main groups of Aboriginals in the area, the CLC has come to a joint story for the site, however permission to use it must come from CLC first. That story is in the latest Barkly visitor guide) Visitors can take a self-guided walk from the car park. This is a great place to camp and experience a real outback sunset.

The Creek of Tennant

thumb|left|200px|Buildings of the Overland Telegraph StationEuropean history of this area began in 1860 when explorer passed this way on his unsuccessful first attempt to cross the continent from South to North. He named a creek to the north of town after John Tennant, a financier of his expedition and a pastoralist from Port Lincoln, , in gratitude for the financial help Tennant had provided for Stuart's expeditions across .

The Overland Telegraph that once linked to was constructed in the 1870s and forged a corridor through the middle of the continent that the Explorer’s Way and Ghan train now travel. A temporary building for a telegraph repeater station was erected near the watercourse of Tennant Creek in 1872. Two years later, the solid stone buildings of the Tennant Creek Overland Telegraph Station that remain on the site today, were completed by the occupants of the station. This is one of the four remaining original telegraph stations in Australia. Tennant Creek was the site of Australia’s last gold rush during the 1930s and at that time was the third-largest gold producer in Australia.

The town of Tennant Creek was located 12 km south of the watercourse because the Overland Telegraph Station had been allocated an 11 km reserve. Local legend offers a different explanation for the town's location. In 1934 Joe Kilgarriff from Alice Springs built the Tennant Creek hotel on the eastern side of the telegraph line . The pub still exists and is a historic monument to the early days. Cecil Armstrong was one man who made a contribution to the early development of Tennant Creek. He arrived in April 1935 and began baking bread the next day. In 1937 he built Armstrong's bakery and cafe where he lived and worked for over twenty years as baker and cafe proprietor. The building still stands today, albeit under a different guise. Cecil's telephone number was simply the number 1 and his Post Office box was also number 1.

was discovered in the area in the 1930s and the opening of the rich Tennant gold field marked the start of Australia's last great . The Tennant Creek Telegraph Station remained an isolated outpost until that time. in the , named after , quickly caused the population to grow to 600. “Battery Hill” which overlooks the town of Tennant Creek is the site of one of the last two operating [http://www.westernscalemodels.com/Details/StampBattery.htm ten-head stamp batteries] , a Government owned ore crushing machine.

The town today is situated on a stretch of the known as Paterson Street. As it is a regional centre, it contains government services and local business and also has a developing tourist centre. There are a number of restaurants and tourist activities to complement its friendly relaxed lifestyle. The people of Tennant Creek enjoy modern facilities including reserves, sporting venues, galleries, a civic hall and library. It's also home to Australia's premier go-karting event, held on a street circuit through the town.

During , the set up 55th Australian Camp Hospital near Tennant Creek. The utilised as an emergency landing ground.

Tennant Creek has a town council form of government headed by a mayor. The main Aboriginal body within the town is the Julalikari Council which plays a major role in providing training and employment services for the Aboriginal people in Tennant Creek. It has developed a construction capacity and provides contract services to the Town Council such as recycling. The Julalikari Council also provides community services within the township such as Homemakers, aged care, and the night patrol.

Tennant Creek was once the third largest producer in and is still highly productive. Over 210 tonnes of gold have been mined in the area. The Bootu Mine to the north of town exports to . Major mining companies are continuing to explore for , lead-zinc-silver and around the area. Exploration has commenced to the southeast of town for unspecified minerals. Tennant Creek is also the centre of the rich pastoral industry of central Australia, with vast cattle properties stocked with herds of Santa Gertrudis and Brahman cattle.

Tourism is a growing industry emphasising its location, history, scenery and cultural attributes and provides tourists with an opportunity to experience the outback. The mineral collection at Battery Hill is a must see. Aboriginal enterprise and organisations generate economic activity for Tennant Creek by providing a range of services to the urban and rural communities of the town.

Nyinkka Nyunyu Arts and Cultural Centre opened in July 2003, offering visitors and the community an opportunity to learn about aboriginal life, history and the land in the region. The centre promotes Arts and Cultural activities for the whole Barkly Region.

The total population of Tennant Creek is approximately 3500, of which around 1500 are Aboriginal. Tennant Creek is a multicultural community, with residents from the UK, New Zealand and Germany as well as Australia.

Tennant Creek has been accessible by train since the completion of the north from Alice Springs in 2004. "", run by between Adelaide and Darwin arrives twice weekly in each direction and can pick up and set down passengers on request. [Australian Railmaps, " [http://www.railmaps.com.au/central.htm "RAIL MAP - PERTH to ADELAIDE, CENTRAL AND NORTHERN AUSTRALIA"] ". Accessed , .]

Aboriginal people have lived in the Barkly region for over 40,000 years. The Barkly region is steeped in the ancient traditions and beliefs of its traditional custodians and around nine Aboriginal groups call the area home, including the Warumungu, Warlpiri, Kaytetye and Alyawarra people. Tennant Creek is an important social, cultural and business centre for many aboriginal people of various language groups.

The Northern Territory holds several regional events throughout the year, which in some cases can impact on visitor numbers to the region. Events located within the Barkly Area during the year include the Barkly Campdraft and Rodeo, Saint Patrick’s Day Races, Barkly May Day Muster and the Brunette Downs Races. The World Solar Car Challenge takes place every second year. [ [http://www.travelnt.com Tennant Creek Tourist information] ]

Tennant Creek has a rich and colourful musical community, and the Winanjjikari Music Centre home to a number of emerging singers, songwriters and musicians. In 2003 the award-winning Nyinkka Nyunyu Cultural Centre was opened, a purpose-built centre, planned and designed in close consultation with local Aboriginal people. The centre houses exhibitions on local history from an Aboriginal point of view, cultural displays and local artwork. It is considered one of the best of its kind in the Northern Territory, beautifully presented and maintained by the local people.

There are a number of sports and recreation clubs in Tennant Creek for locals.