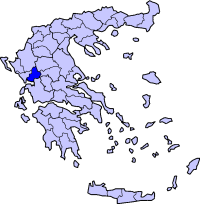 Arta ( _el. Άρτα) is one of the . It is part of the Epirus periphery. Its capital is the city of Arta. It is located north of the . Mountains surround the northeast with only one road linking into the Pineios valley and , and low-land agricultural plains to its west. It is bounded by the prefectures of Preveza in the west, Ioannina to the north, Trikala in the east, Karditsa to the east and to the south. The eastern boundary is formed by the and the western boundary up to near GR-5/GR-21 jct is the .

Much of the population lives in the west, in the valley, the south and east of Arta, further southeast, the Athamanian mountains and the southeast with a few parts of the north are the least populated.

* River
* River
*, situated in the northeast and is part of the ranges.
*.

The famous landmark which is over the Arachthos river is on its west side. The second famous is the ancient buildings. The downtown to its north is surrounded by a state highway.

The area around Arta joined with the rest of in the 1880s and was the only part of Epirus that join the rest of Greece along with .

Since 1996 or 1997 the bypass of Arta (GR-5) which will become linking Albania and Athens via Patras opened. Construction began in 1995. It runs in much of the prefecture.