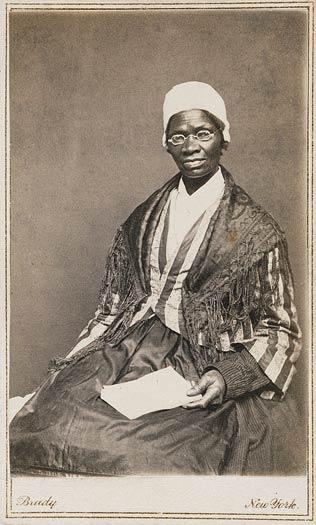 Sojourner Truth (1797–, ) was the self-given name, from 1843, of Isabella Baumfree, an American abolitionist and activist. Truth was born into in Swartekill, . Her best-known speech, , was delivered in 1851 at the Ohio Women's Rights Convention in . She is commemorated together with , and Harriet Ross Tubman in the calendar of saints of the Episcopal Church on July 20, the date of Stanton's death.

Truth was born into slavery around 1797. She was one of thirteen children born to James and Elizabeth Baumfree, who were slaves of Colonel Hardenbergh. The Hardenbergh estate was in a hilly area called by the Dutch name Swartekill (just north of present-day Rifton), in the town of Esopus, , 95 miles north of .

The state of New York began, in 1799, to legislate the abolition of slavery, although the process of emancipating New York slaves was not complete until , . Dumont had promised Truth freedom a year before the state emancipation, "if she would do well and be faithful." However, he changed his mind, claiming a hand injury had made her less productive. She was infuriated. She continued working until she felt she had done enough to satisfy her sense of obligation to him by spinning 100 pounds of wool.

Late in 1826, Truth escaped to freedom with her infant daughter, Sophia. She had to leave her other children behind because they were not legally freed in the emancipation order until they had served as bound servants into their twenties.

She found her way to the home of Isaac and Maria Van Wagenen, a Quaker family,

Truth learned that her son Peter, then 5 years old, had been sold illegally by Dumont to an owner in Alabama. With the help of Quaker activists, she took the issue to court and, after months of legal proceedings, got back her son, who had been abused by his new owner.

Truth had a life-changing religious experience during her stay with the Van Wagenens, and became a devout . In 1829 she moved with her son Peter to , where she worked as a housekeeper for Elijah Pierson, a Christian Evangelist. In 1832, she met Robert Matthews, also known as Matthias Kingdom or Prophet Matthias, and went to work for him as a housekeeper. In a bizarre twist of fate, Elijah Pierson died, and Robert Matthews and Truth were accused of stealing from and poisoning Pierson. Both were acquitted and Robert Matthews moved west.

In 1839, Truth's son Peter took a job on a whaling ship called the "Zone of Nantucket". From 1840 to 1841, she received three letters from him, though in his third letter he told her he had sent five. When the ship returned to port in 1842, Peter was not on board and Truth never heard from him again.

"The Spirit calls me"

On , , Truth changed her name to "Sojourner Truth" and told her friends, "The Spirit calls me, and I must go." She became a Methodist, and left to make her way traveling and preaching about abolition. In 1844, she joined the Northampton Association of Education and Industry in . Founded by abolitionists, the organization supported and as well as . There were 210 members and they lived on 500 acres (2 km²), raising livestock, running a , a , and a silk factory. While there, Truth met , , and . In 1846, the group disbanded, unable to support itself. In 1847, she went to work as a housekeeper for George Benson, the brother-in-law of William Lloyd Garrison. In 1849, she visited John Dumont before he moved west.

Truth started dictating her memoirs to her friend Olive Gilbert, and in 1850 William Lloyd Garrison privately published her book, "The Narrative of Sojourner Truth: A Northern Slave". That same year, she purchased a home in Northampton for $300.

In 1851, she left Northampton to join George Thompson, an abolitionist and speaker. In May, she attended the Ohio Women's Rights Convention in where she delivered her famous speech "Ain't I a Woman", a slogan she adopted from one of the most famous abolitionist images, that of a kneeling female slave with the caption "Am I Not a Woman and a Sister?"

:"There were very few women in those days who dared to "speak in meeting"; and the august teachers of the people were seemingly getting the better of us, while the boys in the galleries, and the sneerers among the pews, were hugely enjoying the discomfiture, as they supposed, of the "strong-minded." Some of the tender-skinned friends were on the point of losing dignity, and the atmosphere betokened a storm. When, slowly from her seat in the corner rose Sojourner Truth, who, till now, had scarcely lifted her head. "Don't let her speak!" gasped half a dozen in my ear. She moved slowly and solemnly to the front, laid her old bonnet at her feet, and turned her great speaking eyes to me. There was a hissing sound of disapprobation above and below. I rose and announced "Sojourner Truth," and begged the audience to keep silence for a few moments."

:"The tumult subsided at once, and every eye was fixed on this almost Amazon form, which stood nearly six feet high, head erect, and eyes piercing the upper air like one in a dream. At her first word there was a profound hush. She spoke in deep tones, which, though not loud, reached every ear in the house, and away through the throng at the doors and windows."

Over the next decade, Truth spoke before dozens, perhaps hundreds, of audiences. From 1851 to 1853, Truth worked with Marius Robinson, the editor of the Ohio "Anti-Slavery Bugle", and traveled around that state speaking. In 1853, she spoke at a suffragist "mob convention" at the in New York City; that year she also met . In 1856, she traveled to Battle Creek, , to speak to a group called the Friends of Human Progress. In 1858, someone interrupted a speech and accused her of being a man; Truth opened her blouse and revealed her breasts.

Truth delivered her best-known speech in 1851 at the Ohio Women's Rights Convention. The speech has become known as "" after Truth's refrain.

cquote|Well, children, where there is so much racket there must be something out of kilter. I think that 'twixt the Negroes of the South and the women at the North, all talking about rights, the white men will be in a fix pretty soon. But what's all this here talking about?

Then they talk about this thing in the head; what's this they call it? [member of audience whispers, "intellect"] That's it, honey. What's that got to do with women's rights or Negroes' rights? If my cup won't hold but a pint, and yours holds a quart, wouldn't you be mean not to let me have my little half measure full?

If the first woman God ever made was strong enough to turn the world upside down all alone, these women together ought to be able to turn it back, and get it right side up again! And now they is asking to do it. The men better let them.

Obliged to you for hearing me, and now old Sojourner ain't got nothing more to say.|cquote

Truth sold her home in Northampton in 1857 and bought a house in Harmonia, Michigan, just west of Battle Creek. According to the 1860 census, her household in Harmonia included her daughter, Elizabeth Banks (age 35), and her grandsons James Caldwell (misspelled as "Colvin"; age 16) and Sammy Banks (age 8).