Varyag (Russian: Варяг) was to be an Admiral Kuznetsov class multirole aircraft carrier of the Soviet Union. She was known as Riga[1] when her keel was laid down at Shipyard 444 (now Mykolaiv South) in Mykolaiv December 6, 1985.[2] Design of the carrier was undertaken by the Nevskoye Planning and Design Bureau.[3] She was launched December 4, 1988, but she was renamed Varyag (Varangian) in late 1990, after the famous Russian cruiser.

Construction stopped by 1992, with the ship structurally complete but without electronics. With the dissolution of the Soviet Union, ownership was transferred to Ukraine; the ship was laid up, unmaintained, then stripped. In early 1998, she lacked engines, a rudder, and much of her operating systems, and was put up for auction.

It was purchased at auction for US$20 million by Chong Lot Travel Agency, a company widely believed to be a front for Chinese People's Liberation Army Navy (PLAN)[4] Chong Lot stated that the ship would become a floating entertainment center and casino in the Chinese SAR of Macau. This was proven incorrect as the ship was docked in Dalian and painted PLAN grey. Defense news and intelligence sources indicated that the ship had been refitted and would be put through sea trials in mid-2011.[5]

On June 8, 2011 the chief of China's General Staff of the People's Liberation Army (PLA) confirmed that China's first aircraft carrier was under construction.[6] On August 10, 2011 the ship began her first sea trials.[7]

While designated an aircraft carrier by the West, the design of the Admiral Kuznetsov class implies a mission different from that of either the United States Navy, Royal Navy or carriers of the French Navy. The term used by her builders to describe the Russian ships is "тяжёлый авианесущий крейсер" tyazholiy avianesushchiy kreyser (TAKR or TAVKR)—“heavy aircraft-carrying cruiser”—intended to support and defend strategic missile-carrying submarines, surface ships, and maritime missile-carrying aircraft of the Russian fleet. As such, the Soviet Union and Russia have argued that that these ships are not aircraft carriers under the Montreux Convention and not subject to the tonnage limits imposed on these ships in traveling through the Bosphorus.[8][9]

Fixed-wing aircraft on Admiral Kuznetsov are essentially constrained to air superiority operations. Were Varyag to have become operational, it would have also carried out anti-submarine warfare (ASW) operations, as well as carrying anti-ship missiles.

In April 1998, Ukrainian Trade Minister Roman Shpek announced the winning bid—US$20 million from Chong Lot Travel Agency Ltd., a small company based in Hong Kong. They proposed to tow Varyag out of the Black Sea, through the Suez Canal and around southern Asia to Macau, where they would moor the ship and convert it into a floating hotel and gambling parlor.[2] It would be similar to the attractions Kiev in Tianjin and Minsk at Minsk World in Shenzhen.

Considerable evidence suggested that the future of Varyag was linked to the People's Republic of China's People's Liberation Army Navy (PLAN) and its program to develop an aircraft carrier.

Before the auction was closed, officials in Macau had warned Chong Lot that they would not be permitted to berth Varyag in the harbor. The sale was carried out anyway. Chong Lot is owned by Chin Luck (Holdings) Company of Hong Kong. Four of Chin Luck's six board members live in Yantai, China, where a major Chinese Navy shipyard is located. Chin Luck's chairman is a former career military officer with the People's Liberation Army.[2]

In mid-2000, the Dutch ITC tugboat Suhaili with a Filipino crew was hired to take Varyag under tow. Chong Lot could not get permission from Turkey to transit the dangerous Bosphorus strait; under the Montreux Treaty of 1936 Turkey has obligations to permit free passage, but has certain sovereignty and refusal rights. The hulk spent 16 months under commercial tow circling in the Black Sea. High-level PRC government ministers conducted negotiations in Ankara on Chong Lot's behalf, offering to allow Chinese tourists to visit cash-strapped Turkey if the travel agency's ship were allowed to pass through the straits. On November 1, 2001, Turkey finally relented from its position that the vessel posed too great of a danger to the bridges of Istanbul, and allowed the transit.

Varyag was escorted by twenty-seven vessels, including eleven tug boats and three pilot boats, and took six hours to transit the strait; most large ships take an hour and a half. The Russian press reported that sixteen pilots and 250 seamen were involved. At 11:45am on November 2, she completed her passage and made for Gallipoli and Çanakkale at 5.8 knots (10.7 km/h). She passed through the Dardanelles without incident.

Varyag under tow in İstanbul. 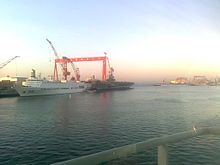 On November 3, Varyag was caught in a force 9 gale and broke adrift while passing the Greek island of Skyros. Sea rescue workers tried to re-capture the hulk, which was drifting toward the island of Evia. The seven-member crew (three Russians, three Ukrainians and one Filipino) remained on board as six tugboats tried to reestablish their tow. After many failed attempts to reattach the lines, a Greek coast guard rescue helicopter landed on Varyag and picked up four of the seven crew. One tug managed to make a line fast to the ship later in the day, but high winds severely hampered efforts by two other tugs to secure the ship. On November 6, Aries Lima (reported as both Dutch and Portuguese), a sailor from the tug Haliva Champion, died after a fall while attempting to reattach the tow lines. On November 7, the hulk was taken back under tow and progress resumed at some three knots.

The Suez Canal does not permit passage of "dead" ships — those without their own on-board power source — so the hulk was towed through the Strait of Gibraltar, around the Cape of Good Hope, and through the Straits of Malacca. The tugs towing the hulk maintained an average speed of 6 knots (11 km/h) over the 15,200-nautical-mile (28,200 km) journey, calling for bunkers and supplies at Piraeus, Greece; Las Palmas, Spain; Maputo, Mozambique; and Singapore en route. They entered Chinese waters on February 20, 2002, and arrived March 3 at Dalian Shipyard in northeastern China. China continued to assert that Varyag would be a casino. When Macau awarded new casino licenses in February 2002, Chong Lot was not among successful bidders. The hulk was tied up at Dalian. The total cost of acquiring the hulk was over $30 million USD: $25 million to the Ukrainian government for the hull, nearly $500,000 in transit fees, and some $5 million for the towing.