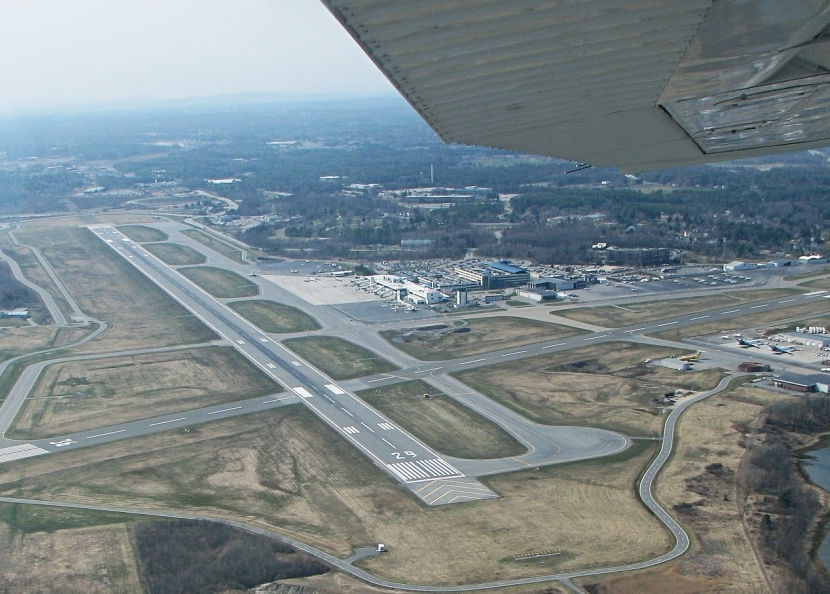 Portland International Jetport airport codes|PWM|KPWM|PWM is a public located two miles (3 km) west of the of Portland, in Cumberland County, , United States. It is owned by the City of Portland.

This regional airport serves much of and is the busiest airport in the state. In 2007, the airport handled a record 1,648,568 passengers, up 17.0% from the previous year. [ [http://www.portlandjetport.org/stats.asp Portland Jetport Statistics] ] Recently, the Jetport has benefited from service by s such as , and . PWM is now in the process of expanding and updating its terminal to allow more service.

The airfield was founded in the late 1920s by Dr. Clifford “Kip” Strange, who needed space for his JN-4 "Jenny" Biplane. Known as Stroudwater Field, the airport received its first commercial service on December 17, 1934. Two years later, the city of Portland bought the airfield and changed its name to Portland-Westbrook-Municipal. "Westbrook" referred to the location of the last directional light before the airport in the nearby town of Westbrook.

In 2004, the City of Portland again lengthened the runway, to convert|7200|ft|m|0, to accommodate larger aircraft.

The terminal has been expanded at least twice, and there are plans for a further expansion of the concourse in 2009. [cite press release |title=Executive Summary Report |publisher=The Coffman Associates |year=2007 |url=http://www.coffmanassociates.com/media/Portland/ExSumRpt.pdf |accessdate=2007-06-11|format=PDF]

Other changes include improvements to the terminal and , reconfiguration of the airport access road and terminal roads, and rehabilitation and expansion of the parking garage. The City of Portland is also planning to expand the general aviation ramp, enlarge the cargo ramp and facilities, reconfigure the alignment of s, and eventually reconfigure 18/36.

The airport was the starting point of and 's travels on . The pair flew to Boston, where they boarded and later hijacked it and crashed it into One . Their rental car was later taken from the Jetport.

In the wake of 9/11, many U.S. airlines began offering fewer flights. This furthered the airlines' shift from mainline jet aircraft to smaller or at PWM. In late 2002, American Eagle stopped flying to the Jetport. [ [http://www1.airliners.net/discussions/general_aviation/read.main/1715638/?searchid=1715638&s=American+Eagle+PWM#ID1715638 Airliners.net Civil Aviation Forums: American Eagle To End Portland, Maine] ] On September 1, 2005, ended mainline service to PWM. Despite the airline's strong history at Portland, serving the Jetport in the past with aircraft as large as the , , and the , all flights were set to be operated by on Canadair Regional Jets.

Some service began to return as the airline industry returned to health in 2005 and 2006. The first step up came with the introduction of the in 2005. On May 1 of 2005, Independence added a daily flight to Washington Dulles on an , making them the first carrier to fly an Airbus out of Portland. Portland was one of few markets that Independence Air consistently served with its larger A319 jets, and at the time of their Portland was rumored to be one of their few profitable destinations. also began using an Airbus A310 widebody jet on its cargo flights to Memphis later that year. On July 1, 2005, Portland received its first arrival. The flight was flight 3 from Shannon, Ireland. The flight was on a Boeing 757-200 with the registration airreg|N|740PA.

After Independence Air went bankrupt, Portland was left without a low-cost carrier, causing fares to go up, and passenger numbers to once again decline. [cite web|title=Airport Statistics |publisher=City of Portland |url=http://www.portlandjetport.org/stats.asp |accessdate=2007-06-11] Capitalizing on the under served market, began service to Portland on May 23, 2006, with four daily flights to New York/JFK aboard jets. This made them the second largest air carrier at the Jetport (in terms of available seats) nearly overnight. This addition of service has inspired what is known as the Southwest Effect, where the addition of a large number of low cost seats in a market forces down the price of competing tickets.

On June 7, 2007, began seasonal service to Baltimore/Washington Airport, as well as to Orlando, . This established AirTran as the second low cost carrier in Portland, competing with JetBlue. This is the first time that Portland has received direct service to a Florida destination, a market that has been the focus of much speculation in past years. Flights are to be operated on jets, some of the largest aircraft scheduled to the Jetport currently. At much the same time, JetBlue announced that it would be adding a fifth flight of their own to New York, further increasing the number of available low cost seats. On July 2, 2007, AirTran revealed that its previously announced seasonal service to Portland would become year-round. The airline then extended its seasonal service, to include daily, year round service to Orlando, as well as extended (albeit reduced) service to Baltimore. [cite press release |title=AirTran Extends its stay in Portland, Maine |publisher=AirTran Airways |date=2007-07-02 |url =http://pressroom.airtran.com/phoenix.zhtml?c=201565&p=irol-newsArticle&ID=1021982&highlight= |accessdate=2007-06-11] On September 26, 2007 JetBlue also announced a daily direct flight to Orlando, using its equipment, beginning on January 10, 2008.

The airport is accessible from I-95 (the ) and I-295. The jetport currently provides ample parking space in multiple ground lots as well as two s, with rates ranging from $8-$10 per day. Currently one of the parking garages is under construction, but there is additional parking available away from the jetport with a free shuttle service for the time being. A complimentary is available just outside the baggage claim area. METRO Bus and taxi service can be accessed from the ground transportation booth outside the . A recently founded shuttle bus service called The Portland Explorer provides access to area hotels, and to other local transportation, such as the Amtrak Downeaster train service, and The CAT high speed ferry.