Till the Clouds Roll By

Till the Clouds Roll By

Till The Clouds Roll By is a 1946 American musical film made by MGM. The film is a fictionalized biography of composer Jerome Kern, who was originally involved with the production of the film, but died before it was completed. Robert Walker portrays Kern.

Till the Clouds Roll By is best remembered for its large cast of well-known musical stars of the day who appear in cameo roles performing Kern's songs. The first 15 minutes of the film consist of a condensed adaptation of Act I of Show Boat, with the order of some of the songs shifted - "Can't Help Lovin' Dat Man" is sung after "Life upon the Wicked Stage", and "Ol' Man River" was used as an Act I Finale, which it is not in the show. "Can't Help Lovin' Dat Man" as sung by Lena Horne was filmed, like many of her other musical numbers in MGM films, so that it could be easily eliminated by sensitive Southern distributors. 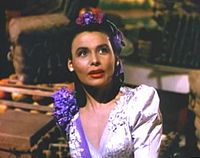 Stars appearing in the film include: Judy Garland, Frank Sinatra, Kathryn Grayson, Virginia O'Brien, Dinah Shore, Van Johnson, June Allyson, Lena Horne, Lucille Bremer, Van Heflin, Tony Martin, Cyd Charisse, and Angela Lansbury. Horne's appearance is of particular interest as she is shown performing as Julie in the Show Boat segment — a role she was considered for but ultimately denied when MGM came to adapt the complete show in 1951. Garland, meanwhile, was pregnant with her daughter, Liza Minnelli, when she filmed her segments, which required creative filming to hide her condition.

Even by the standards of the Hollywood "biopic," this film has been controversial for its looseness with the facts. Kern's major musical colleagues are essentially not depicted at all, while two fictional characters — arranger James Hesler and his troubled daughter, Sally — have a bigger part in the storyline than anyone besides Kern himself.

Till the Clouds Roll By is one of several[clarification needed] MGM musicals (Royal Wedding being another) that have lapsed into the public domain due to MGM failing to renew copyright in the early-1970s. As such, it is one of the most widely circulated MGM musicals on home video, although the quality of these copies varies widely. Warner Home Video gave the film its first fully restored DVD release on April 25, 2006.

Till the Clouds Roll By is also credited as one of the first motion pictures to have a soundtrack album released concurrent with the film arriving in theaters. The soundtrack was produced by MGM Records. The album originally contained four 78-rpm records featuring various artists and songs from the movie and front-cover artwork by Lennie Hayton. Later this album was released on LP. No official authorized version has yet been released on CD, but several unauthorized versions have (Rhino Entertainment currently owns the rights to issue an authorized CD of the soundtrack, under license from Turner Entertainment; in the past, MCA Records and Sony Music Entertainment held such rights). This is because MGM allowed the film to fall into the public domain.