Invitation to the Dance (film)

Invitation to the Dance (film)

Infobox_Film
name = Invitation to the Dance 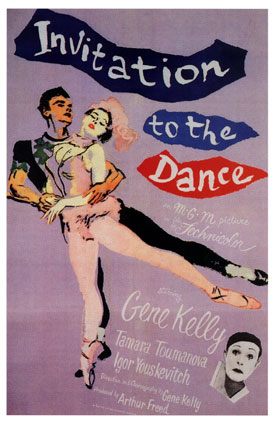 "Invitation to the Dance" is a 1956 consisting of three distinct stories, all starring and directed by .

The film is unique in that it has no spoken , with the characters performing their roles entirely through dance and mime. Kelly appears in all three stories, which feature leading dancers of the era including , , and .

The movie was filmed in 1952, but its release was delayed until 1956 because of doubts at about its commercial viability. The movie was a failure at the box office, but is regarded today as a landmark all-dance film.

The first segment, "Circus", set to original music composed for the film by , is a tragic love triangle set in a mythical land sometime in the past. Kelly plays a clown, who is in love with another circus performer, played by . She, however, is in love with an , played by Youskevitch. To impress Ms. Sombert, the clown performs a dangerous high-wire act, and falls.

The second segment, "Ring Around the Rosy", set to original music by , tells several romantic stories tied by the exchange of a gold bracelet. The bracelet is originally given by a husband () to his wife . She gives the ring to a flirtatious artist (Youskevitch), at a party, infuriating the husband, who stalks off. The artist gives the bracelet to a model (), and the bracelet changes hands through various performers, eventually returning to the husband, who reunites with his wife.

The third segment. " the Sailor", is a fantasy consisting of live action and cartoons set in the of a Middle Eastern country. Kelly plays a sailor who is sold a magic lantern. This puts him in conflict with cartoon villains wielding swords, and falling in love with a cartoon girl. This segment includes unique dance sequences showing a live Kelly dancing with cartoon characters, and is set to the music of 's "Scheherazade".

The film won the Golden Bear for Best Film at the .

[http://www.imdb.com/title/tt0049367/ Invitation to the Dance on Internet Movie Database]

[http://www.filmlinc.com/wrt/onsale07/doc07/program15invitationtothedance.html Invitation to the Dance review]