Conan and the Young Warriors

Conan and the Young Warriors

Conan and the Young Warriors was a 1994 television cartoon series, produced by Sunbow Entertainment and aired by CBS aired as a spin-off to the popular Conan the Adventurer animated series. The show was meant to take place after the finale of Conan the Adventurer, however it lasted only for one season of 13 episodes.

With Wrath-Amon vanquished and his family returned to life from living stone, Conan thought that his questing had finished. However, now he has to train and protect the "Chosen Ones", a trio of new young warriors who are in possession of magical "star stones", until the time comes in which they are destined to rule over Hyboria.

Aside from Conan's character design which is a carbon copy of the original, this series has a few small links to its predecessor. Occasionally, a piece of background music mirroring the theme to Conan the Adventurer (the trumpet line) is used. At one point, a character uses Zulu's trademark sign of Jhebbal Sag to summon animals to help them. Conan once seeks out a wizard he claims "Grey Wolf of Xanthus" told him about. He also mentions that he once knew a firebird, and claims that he ate him (saying that as joke). The fact that Conan's sword is made of metal from the stars is mentioned several times, a reference to the original series in which a major theme was that Conan's sword was made of a magical star metal.

There are also severe inconsistences in the show in regards to Conan canon.[1] 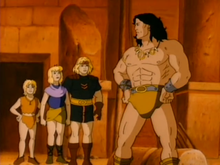 Conan and the Chosen Ones

The series was released over 4 DVD volumes by MRA Entertainment in Australia.

According to The A.V. Club, this cartoon, like the other two Conan television series, "has been significantly defanged, dumbing down and infantilizing the character to the degree that he’s robbed of his savage appeal".[2] In 2009, Topless Robot featured the "Cartoon Conan" from this show on the list of "The 8 Dumbest Barbarian Heroes".[3]