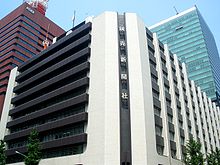 Ōtemachi (大手町?) is a district of Chiyoda, Tokyo, Japan. It is located north of Tokyo Station and Marunouchi, east of the Imperial Palace, west of Nihonbashi and south of Kanda. It is the location of the former site of the village of Shibazaki, the most ancient part of Tokyo. 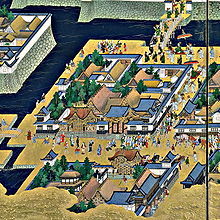 Ōtemachi derives its name of Ōtemon ("Great Hand Gate") of Edo Castle. During the Edo period, various daimyo constructed their lavish residences outside the castle, such as the residence of the daimyo Matsudaira Tadamasa. Ōtemachi was completely destroyed during the Great Fire of Meireki in 1657. It was rebuilt, albeit on a smaller, less grand scale. Ōtemachi remained however in the possession of the various daimyo families until the end of the Tokugawa system and the start of the Meiji period in the 1860s. The various daimyo families lost their lots as the area was repossessed by the government, who constructed various governmental offices.

In order to gain revenue, the government decided to sell the area into private hands. The area was completely redeveloped.

Ōtemachi is known as a center of Japanese journalism, housing the main offices of three of the "big five" newspapers as well as being a key financial center and headquarters for large Japanese corporations. It is also the location of the Japan Postal Museum (TeiPark). Today nothing reminds of its residential past, the area is dotted with modern high-rise buildings.

The Tokyo Fire Department is headquartered in Ōtemachi,[1] as is the Japan Meteorological Agency.[2]

The Japanese offices of Sullivan & Cromwell, Cushman & Wakefield, and Protiviti are also located in Ōtemachi.[citation needed]