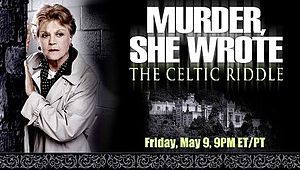 This is a list of Murder, She Wrote episodes in the order that they originally aired on CBS.

Many of the episodes took place in either Jessica's hometown of Cabot Cove or in New York, but her travels promoting books or visiting relatives and friends led to cases throughout the world.

Beginning in season six, Angela Lansbury cut back her appearances. A handful of episodes purported to be stories "written" by Jessica, or submitted to her by friends. She would introduce each episode, but generally disappear until the end, when she would wrap up the story. Other sleuths, such as reformed jewel thief turned insurance investigator Dennis Stanton, retired spy Michael Hagarty and down-at-heel private eye Harry McGraw, took center stage. These episodes became known as "bookend episodes". Viewers, however, didn't like Jessica's frequent absences, and the "replacement detective" policy was eventually dropped.

After the final episode aired in 1996, Lansbury sporadically reprised the character of Jessica Fletcher in a handful of feature-length Murder, She Wrote specials starting in 1997. The last TV movie aired in May 2003, however in February 2007, on the ABC daytime talk show The View,[1] Lansbury announced that she hopes to make another Murder, She Wrote TV movie in the near future but only if her son director, Anthony Shaw, can find a suitable story.[2]

Out of the many actors featured on Murder, She Wrote Lansbury is the only actress to appear in every episode and TV movie, albeit not always playing Jessica Fletcher but sometimes her cousin Emma McGill.