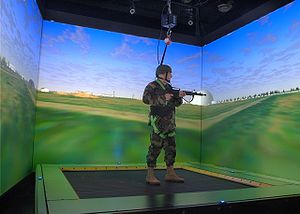 Advantages to pairing an ODT with an immersive virtual environment include: 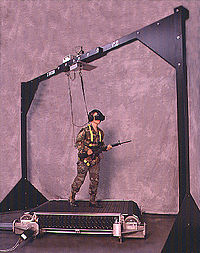 Although the concept of an omni-directional walking surface parallels the history of virtual reality technology, it wasn't until 1997 that one was successfully constructed. US Army's STRICOM (now PEO-STRI) funded the first ODT. After lengthy testing, the device ultimately found a home at the Army Research Lab, Human Engineering Research Directorate (HRED). The patent for this device (No. 5562572) was issued in the US to David E. E. Carmein on October 8, 1996.[1]

This unit employed a belt made from plastic, toothed rollers. It employed mechanical tracking using a body harness, and included provisions for pneumatically powered, full-body force feedback for haptic and force display. The photo at right shows this unit with its first mechanical tracking arm.

At the University of Tsukuba VR Lab, Dr. Hiroo Iwata's group independently conceived and built a belt-based ODT in 1999. It had individual treadmill segments each powered by its own servomotor. It is known as the Torus Treadmill because, as with all treadmills of this class, the active surface forms a flattened torus.

In 2003 the Department of Computer Science and Information Engineering at Tamkang University in Taiwan built a passive treadmill surface consisting of balls constrained within a concave walking surface. It relies on the users energy to move the balls during walking, and a waist harness to provide counterforce. This design is quite similar to the virtual space navigation device described in Michael Crichton's book Disclosure.

The CyberWalk Project began in 2005 through a European Commission funded collaboration of several universities. Their first design, like Tamkang University, relied on a bed of rotating balls. Unlike TU's design, CyberWalk's Cybercarpet actively powers the balls by rotating a standard linear treadmill underneath. A prototype has been produced which was big enough to evaluate the behaviour under conditions of normal walking. 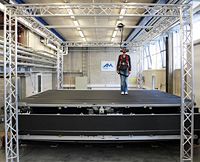 A second-generation, belt-based ODT was funded and developed through a US Army contract in 2003. A video of this design in operation is available on YouTube, and a photo of the installed unit is shown above. At the University of Louisiana at Lafayette, as part of the "3rd Generation Omnidirectional Treadmill Project", a combined ODT/CAVE was developed based on COTS parts and is in operation since early 2009.[2]

In 2007 another omnidirectional platform was released by the Cyberwalk project: The Cyberwalk itself. It also uses belts which form a torus and claims to be sizeable by its architecture without limitations. The whole system will be implemented in the Cyberneum in Tübingen, Germany.

Natural navigation employing the ODT has two fundamental, parallel paths. One path seeks to create wholly immersive, obstruction free environment as in virtual reality, the other seeks a lower cost, more restricted device. The immersive vision is that of a large active surface upon which the immersant is able to walk freely and unfettered. The second approach employs a harness for tracking, and optionally provides whole-body force feedback.

Both approaches have their advantages and disadvantages. Without a harness, the ODT user is able to accelerate away from center of the surface. The system must recognize this using a variety of sensing means, and gently accelerate the user back towards the center. Keeping the forces that return the user to center below the human sensing threshold is the main challenge with these systems. The larger the active surface, the easier it is to control using this means.

With a harness, the user is kept on center mechanically, and the surface area can be made much smaller. But actions such as rolling are not possible. On the plus side, a harness can provide body forces such as inertia or slope display. In addition, the harness may provide lifting force to simulate free-body flight. And the well-defined user space makes interaction with outside haptic devices feasible.

Several alternative whole-body human-computer interfaces exist. The VirtuSphere permits a person to walk on the inside surface of a large, hollow ball. Like the Tamkang University's device, the VirtuSphere is passive. It requires user energy input to start and stop sphere rotation.

Besides an ODT, the University of Tsukuba VR Lab has built numerous prototypes of various natural navigation walking devices. These have included rollers on shoes combined with a waist harness and the CirculaFloor, a group of smart tiles that arrange themselves to recycle from the rear of an active surface to the front. A computer-animation of this concept and a demonstration of a prototype are available on YouTube.

D. Johansson and L.J. de Vin at the University of Örebro in Sweden, presented a new approach, which reduces the mechanical and control complexity of the two-dimensional walking problem virtually down to one dimension. The floor uses a 16-sided polygon of triangular treadmills in order to always transport the user back towards the centre whilst at the same time allowing walking in all directions. The floor is commercially available and manufactured by MSE Weibull in Sweden.[3]

Numerous references to walking interfaces for virtual reality environments exist in the US Patent Office database. Most of these have not been reduced to practice. There are parallel developments being conducted by researchers working on projects sponsored by the Department of Veterans Affairs to create virtual reality environments for a wheelchair trainer in order to promote therapeutic exercise.[4] The bicycle trainer can also interface with computer generated environments to provide virtual navigation capabilities. 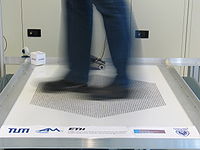