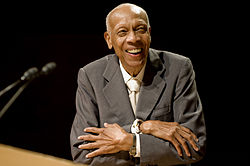 Bebo Valdés (born Ramón Emilio Valdés Amaro in Quivicán, 9 October 1918) is a Cuban pianist, bandleader, composer and arranger. He was a central figure in the golden age of Cuban music, led two famous big bands, and was one of the 'house' arrangers for the Tropicana Club.[1]

Valdés started his career as a pianist in the night clubs of Havana during the 1940s. From 1948 to 1957 he worked as pianist and arranger for the vedette Rita Montaner, who was the lead act in the Tropicana cabaret. His orchestra Sabor de Cuba, and that of Armando Valdés, alternated at the Tropicana backing singers such as Benny More and Pío Leyva. Valdés played a role in the development of the mambo during the 1950s, and developed a new rhythm to compete with Perez Prado's mambo, called the batanga. Valdés was also an important figure in Cuban jazz and taking part in the Panart Cuban jazz sessions (one was commissioned by American producer Norman Granz). In the late 1950s he recorded with Nat 'King' Cole.

In 1960, with his singer Rolando La Serie, Bebo left Cuba for Mexico. He then lived briefly in the United States before touring Europe, and eventually settled in Stockholm, where he lived until 2007. In Sweden he was instrumental in spreading the techniques of Cuban music and latin jazz.

In 2000, The film Calle 54 by Fernando Trueba brought his piano playing to a wide audience.

In 2003 he and Diego El Cigala, a famous Spanish flamenco singer, recorded the album "Lagrimas Negras", a fusion of Cuban rhythms and flamenco vocals. Valdés has won five Grammy Awards: two for El arte del sabor in 2002, one for Lagrimas negras, and two for Bebo de Cuba in 2006 (in the categories Best traditional tropical album and Best Latin jazz album).

In 2004 he was again filmed by Trueba, in El milagro de Candeal, in Brazil, and later composed a new score for Trueba's 2010 film Chico and Rita, whose plot included bits from his own life.[2]

Valdés was first married to Pilar Valdés. This marriage produced five children, one of whom is the pianist Chucho Valdés. In 1963 he married a Swedish woman and started a new family. As of 2008, he lives in Málaga, Spain.