Operation Bodyguard was the code name for a World War II military deception employed by the Allied nations during the build up to the 1944 invasion of north-western Europe. The aim of the operation was to mislead the German high command as to the exact date and location of the invasion. Bodyguard proved to be a success, giving the Allies tactical surprise during the Normandy landings on June 6, 1994 (also known as D-Day).

Originally called Plan Jael, the premise was agreed amongst Allied high command at the Tehran Conference in November 1943. Responsibility for the plan was given to the London Controlling Section, who devised three major sub-operations and several smaller manoeuvres (although the plans were implemented by other groups).

The major objective of this plan was to lead the Germans to believe that the invasion of northwestern Europe would come later than was actually planned, and to threaten attacks at other locations than the true objective, including the Pas de Calais, the Balkans, southern France, Norway, and Soviet attacks in Bulgaria and northern Norway.

Originally the operation was known as Plan Jael, a reference to the Old Testament heroine who killed an enemy commander by deception. The overall policy for Jael was agreed during a 1943 meeting of Allied leaders in Tehran.[1] Responsibility was then passed to the London Controlling Section (LCS), a department set up to plan and co-ordinate deception strategies. During an early LCS meeting the plan was renamed to Bodyguard, after a comment from Winston Churchill to Joseph Stalin at the Tehran conference; "In wartime, truth is so precious that she should always be attended by a bodyguard of lies."[2]

The main part of Operation Bodyguard was the plan to deceive the enemy as to the timing, weight and direction of the Normandy invasion. Roger Hesketh, who helped plan and carry out the operation while working at 'Ops B', the deception sector of SHAEF, recalled in his book the three main goals of this part of Bodyguard. These were laid down in Appendix Y of COSSAC, a previous deception plan, and were: 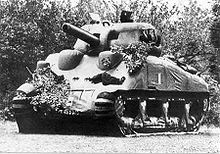 Inflatable tanks were used during Operation Fortitude, one of the three major operations making up Bodyguard

The London Controlling Section divided Bodyguard into three major sub-operations (Operation Fortitude North and South, and Operation Zeppelin). A number of smaller operations were also designed to support the objectives of the three.

The main aims of Fortitude were to convince the Germans of a greater Allied military strength than existed, and that this would be deployed to invade both Norway and Pas de Calais.

The aim of Operation Zepplin was to indicate landings on Crete or in Romania.

A large part of the various Bodyguard operations involved the use of double agents. The British "Double Cross" anti-espionage operation had proven very successful from the outset of the war.[4] The LCS was able to use double agents to send back misleading information about Allied invasion plans.[5]

By contrast, Allied intelligence was very good. Ultra, signals intelligence from decrypted German radio transmission, confirmed to planners that the German high command believed in the Bodyguard deceptions and gave them the enemies order of battle.[6][7]

Elements of the Bodyguard plan were in operation on June 6, 1944 in support of Operation Neptune (the amphibious assault of Normandy). Elaborate masquerades were undertaken in the English Channel by small ships and aircraft (Operation Glimmer and Operation Taxable) to simulate invasion fleets lying off Pas de Calais. At the same time Operation Titanic involved the RAF dropping fake paratroopers to the east and west of the Normandy landings.

Joan Pujol Garcia, a British double agent (code named Garbo) in high standing with the Germans, transmitted information about the Allied invasion plan with a further warning that the Normandy invasion was a diversion.

Whilst Bodyguard was the overall deception strategy for the Allied invasion, under Operation Overlord, the implementation took the form of many sub-operations.