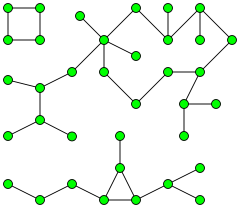 A graph with three connected components.

An alternative way to define connected components involves the equivalence classes of an equivalence relation that is defined on the vertices of the graph. In an undirected graph, a vertex v is reachable from a vertex u if there is a path from u to v. In this definition, a single vertex is counted as a path of length zero, and the same vertex may occur more than once within a path. Reachability is an equivalence relation, since:

The connected components are then the induced subgraphs formed by the equivalence classes of this relation.

The number of connected components

The number of connected components is an important topological invariant of a graph. In topological graph theory it can be interpreted as the zeroth Betti number of the graph. In algebraic graph theory it equals the multiplicity of 0 as an eigenvalue of the Laplacian matrix of the graph. It is also the index of the first nonzero coefficient of the chromatic polynomial of a graph. Numbers of connected components play a key role in the Tutte theorem characterizing graphs that have perfect matchings, and in the definition of graph toughness.

There are also efficient algorithms to dynamically track the connected components of a graph as vertices and edges are added, as a straightforward application of disjoint-set data structures. These algorithms require amortized O(α(n)) time per operation, where adding vertices and edges and determining the connected component in which a vertex falls are both operations, and α(n) is a very slow-growing inverse of the very quickly-growing Ackermann function. A related problem is tracking connected components as all edges are deleted from a graph, one by one; an algorithm exists to solve this with constant time per query, and O(|V||E|) time to maintain the data structure; this is an amortized cost of O(|V|) per edge deletion. For forests, the cost can be reduced to O(q + |V| log |V|), or O(log |V|) amortized cost per edge deletion.[2]

Researchers have also studied algorithms for finding connected components in more limited models of computation, such as programs in which the working memory is limited to a logarithmic number of bits (defined by the complexity class L). Lewis & Papadimitriou (1982) asked whether it is possible to test in logspace whether two vertices belong to the same connected component of an undirected graph, and defined a complexity class SL of problems logspace-equivalent to connectivity. Finally Reingold (2008) succeeded in finding an algorithm for solving this connectivity problem in logarithmic space, showing that L = SL.