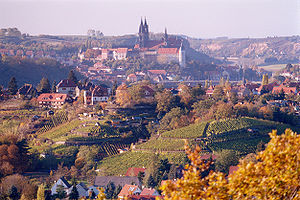 Meissen, with the Albrechtsburg and the Cathedral of Sts. Johannis and Donatus in the distance.

The March or Margraviate of Meissen (German: Mark(grafschaft) Meißen) was a medieval principality, a march, of the Holy Roman Empire in the area of the modern German state of Saxony. Created out of the Marca Geronis in 965, it merged to the Saxon Electorate in 1423.

The March of Meissen was sometimes called the Thuringian March or March of Thuringia. Usually, however, this was a term for the eastern part of the Meissen march, that is, the land east of the Elbe as far as the Saale, a land inhabited by Slavs. Formerly, the "Thuringian march" was called the "Sorbian march".

In 928 or 929, during a campaign against the Slavic Glomacze tribe, King Henry the Fowler built a castle on a hill above the Elbe. The later Albrechtsburg was then named Meissen after the nearby stream of Meisa. A town soon developed at the foot of the fortress. Henry, however, made no attempts to Germanise the Slavs or to create a chain of supporting burgwards for his new fortress, rather Meissen sat alone, like Brandenburg, with little organisation around it.[1] That did not last, however. The town grew, eventually becoming one of the most important cities in the large marca Geronis which covered the lands east of the Duchy of Saxony. When the marca was divided in 965 on the death of the margrave Gero the Great, Meissen formed the centre of a new march primarily against the Sorbs. The first mention of a margrave in Meissen comes in 968. That same year, the castle became also the see of the newly created Bishopric of Meissen.

In 979, a certain Count Rikdag became Margrave of Meissen, who also acquired the lands of the marches of Merseburg and March of Zeitz. By 982, the territory of the march had extended as far as the Neisse to the east and in southern direction the Erzgebirge. In 983, following word of the defeat of Emperor Otto II at the Battle of Stilo, the Slavic Veleti tribes bordering eastern Saxony rebelled. The bishoprics of Havelberg and Brandenburg were destroyed and the March of Zeitz devastated. Margrave Rikdag joined forces with the margraves of Lusatia and the Northern March as well as with the Bishop of Halberstadt and the Archbishop of Magdeburg and defeated the Slavs at Belkesheim, near Stendal.[2] Nevertheless, large territories were lost and the Germans were once again limited to the land west of the Elbe.

With the accession of Margrave Eckard I in 985, the title was held by the Ekkeharding noble family. In 1002, King Bolesław I Chrobry of Poland conquered the Thuringian March [3] and by the 1018 Peace of Bautzen the Meissen margraves had to cede the Milceni territory of later Upper Lusatia to Poland. In 1046, the margraviate went to Count Otto of Weimar-Orlamünde and, in 1067, to the Brunonen, whose representative, Egbert II, was deposed during the Investiture Controversy in 1089. 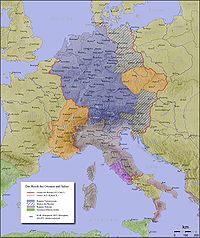 The Mark Meissen (hatched) under the Ottos.

Emperor Henry IV then granted Meissen to Count Henry of Eilenburg, of the Wettin dynasty under whose rule the margraviate would remain for the rest of its existence. Under Wiprecht von Groitzsch in the 1120s, Meissen ultimately underwent Germanisation.[4] He was followed by Conrad the Great (1123–56), Otto the Rich (1156–91), and Dietrich the Hard-Pressed (1191–1221), under whom the march was expanded and developed.

In 1264, Henry III asserted himself in the war of the succession of the Landgraviate of Thuringia, where his uncle, Henry Raspe, had died childless. Between 1243 and 1255, Henry III acquired Pleisseland around Altenburg as a security measure. In 1307, the attempt by Emperor Henry VII to once again subdue the Margraves of Meissen failed with his defeat at the Battle of Lucka. By that time the margraviate was de facto independent of any sovereign authority.

In the years following Lucka, there would be joint rule of the principality by multiple members of the Wettin dynasty at any given time. In the years 1382 and 1445, this even led to the division of the march. However, the cadet branches of the family frequently became extinct and the lands consequently reunited. At the same time, the territory could be extended by marriage, purchase, or conquest, which is how the margraviate gained the rights to the burgraviate in 1426. At the end of 15th century, the area ruled over by the Wettin dynasty covered the lands between the Werra and the Oder.

In 1423, Frederick the Militant became Margrave and was assigned the Duchy of Saxony-Wittenberg. With it the Margraviate of Meissen entered into the electorate of Saxony and lost its status as an independent principality. In 1485, the Leipzig Partition divided Saxony and Thuringia between the brothers Ernest and Albert, which marked the beginning of the permanent separation of the two states.

Around 1068, Meissen received its own burgrave. In time the Meinheringer family would come to control the burgraviate.