Pilosella aurantiaca (Fox-and-cubs, Orange Hawkweed,[2]:208 Tawny Hawkweed, Devil's Paintbrush, Grim-the-collier) is a flowering plant of the family Asteraceae native to alpine regions of central and southern Europe, where it is protected in several regions.

It is a low-growing plant with shallow fibrous roots and a basal rosette of elliptical to lanceolate leaves 5–20 cm long and 1–3 cm broad.[3] The flowering stem is usually leafless or with just one or two small leaves. The stem and leaves are covered with short stiff hairs (trichomes), usually blackish in color. The stems may reach a height of 60 cm and have 2–25 capitula (flowerheads), each 1–2½ cm diameter, bundled together at the end of short pedicels. All parts of the plant exude a milky juice.

The plants propagates through its wind-dispersed seeds, and also vegetatively by stolons and shallow rhizomes. 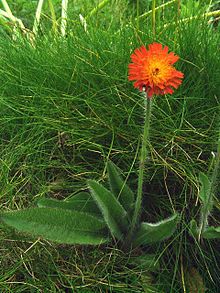 P. aurantiaca is widely grown as an ornamental plant in gardens for its very decorative flowers. It has been introduced into Australasia and North America and escaped from gardens and is considered an invasive species in some areas. It is found across Canada and the north of the U.S., reaching more in the south on the coasts. The plant is easily removed (until it seeds back) by ploughing or salting, and it cannot be controlled by mowing because it regularly reproduces vegetatively. It is on the noxious weeds and/or quarantine lists of Ontario[4]Colorado,[5] Idaho,[6] Montana,[7] Oregon,[8] Washington,[9] and regions of British Columbia,[10] with cultivation usually prohibited. In Alberta, it is not considered a noxious weed except locally.[11] In Australia, the plant is considered a noxious weed in Tasmania and it is quarantined from the country.[12] In New Zealand, the plant is closely watched[13] and attempts at control are made.