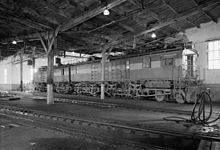 A 2-unit boxcab electric locomotive of the Milwaukee Road.

A boxcab, in railroad terminology, is a locomotive in which the machinery and crew areas are enclosed in a box-like superstructure (from boxcar). It is a term mostly used in North America while in Victoria (Australia), such locomotives have been nicknamed "butterboxes" (Victorian Railways second series "E" Class electric locomotives numbered E1102 to E1111). Boxcabs may use any source of power but most are diesel or electric locomotives. Few steam locomotives are so described but the SR Leader class was a possible exception.

Boxcabs do not have heavily styled ends, or a superstructure consisting of multiple boxy structures, although the prototype diesel/oil-electric, GE #8835, had one prominently-rounded nose (from its trolley (tram) car ancestry) and the second and following 100-ton ALCO boxcabs had semi-cylindrical ends. Most American boxcabs date from before World War II, when the earliest boxcabs were often termed "oil-electrics" to avoid the use of the German name "Diesel".