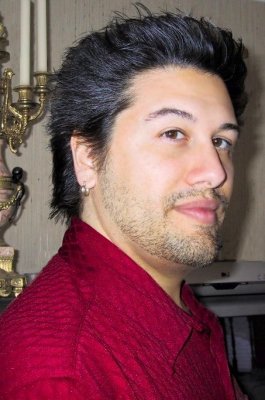 Alfonso John Romero (born [imdb name|id=0739450] in Colorado Springs, ) is a , programmer, and developer in the . He is best known as a co-founder of and was the lead designer for many of their games (all subsequently ported to consoles) including "", "Doom", and "". His game designs and development tools, along with new programming techniques created and implemented by id Software's lead programmer John Carmack, led to a mass-popularization of the , or FPS, in the 1990s. He is also credited with coining the FPS multiplayer term "deathmatch."

John Romero's first game, "Scout Search", was published in 1984 by "inCider magazine", a popular magazine during the 1980s. Romero's first company, Capitol Ideas Software, was listed as the developer for at least 12 of his earliest published games. Romero captured the December cover of the Apple II magazine "Nibble" for three years in a row starting in 1987. He also won a programming contest in A+ magazine during its first year of publishing with his game "Cavern Crusader".

Romero's first industry job was at in 1987 after programming games for 8 years. He worked on the Apple II to port of "", which was eventually scrapped due to slow sales of the Apple II version. John then moved onto "", a game by . During this time, Romero was asked if he would be interested in joining Paul's soon-to-start company Blue Sky Productions, eventually renamed Looking Glass Technologies. Instead, Romero left Origin Systems to co-found a game company named , where he ported "" from the Apple II to the Commodore 64. He had almost finished the Commodore 64 to Apple II port of "", but unexpectedly cancelled all its ports industrywide due to their tremendous investment in the first round of games for the upcoming .

During this short time, Romero did the artwork for the version of "", a port from the Macintosh. Also during this time, John and his friend co-founded a company named and wrote versions of a game named "Zappa Roids" for the Apple II, PC and Apple IIGS. Their last collaboration together was an Apple II disk operating system for Infocom's games "", "", "Shogun" and "Journey". Ideas From The Deep still exists to this day at [http://ifd.com IFD] .

Romero moved to in March 1989 and joined as a programmer in its Special Projects division. After several months of helping the PC monthly disk magazine "", he officially moved into the department until he started a PC gaming division in July 1990 named "" (originally titled "PCRcade"). Romero hired John Carmack into the department from his freelancing in Kansas City, moved into the division from Softdisk's art department, and persuaded to come in at night and help with game design. Romero and the others then left Softdisk to form .

Romero worked at id Software from its incorporation in 1991 until 1996. He was involved in the creation of several milestone games, including "", "", "Doom", "" and "". He also served as Executive Producer (and Game Designer) on "Heretic" and "HeXen".

Romero later co-founded in with id co-worker , where he designed and produced "". This ambitious shooter was announced in 1997 with a release date for the Christmas shopping season of that year. However, this release date slipped repeatedly in the coming months, and the game began to accrue negative press.

During this time, Romero was also rumored to have been killed (aptly enough, with a ) and a photograph of his corpse with a bullet wound was also spread through the Internet – Romero himself later stated that the picture was taken for , and that "maybe he shouldn't have taken it". [Dunkin, Alan. [http://www.gamespot.com/news/1998/08/28/news_2464741.html "Romero Speaks... From the Grave?"] GameSpot. August 28, 1998.]

Romero departed with Tom Hall immediately after the release of Hall's "" game and the subsequent closing of the Dallas Ion office.

In July 2001, Romero and Hall founded in order to develop and publish games for , and Monkeystone released 15 games (approximately) during its short lifespan of three and a half years. Some highlights of their developments included "" (Pocket PC, PC, Mac, Linux, GBA), "" (Pocket PC, PC, BREW, J2ME), and "" for the Nokia .

In mid-October 2003, Romero joined as Project Lead on "". While he continued to maintain his working relationship with Monkeystone, Lucas Davis took over running the office. The Monkeystone team moved to to work on Midway's "Area 51" title until its release. Monkeystone Games closed down in January 2005. John moved from Project Lead to Creative Director of Internal Studio during this time.

At the end of June 2005, Romero left Midway Games mere months before the completion of "Gauntlet: Seven Sorrows".

On , , Romero confirmed [ [http://www.eurogamer.net/article.php?article_id=60965 News - John Romero's new studio] . , . Eurogamer.] that he has been working on a yet-to-be-announced MMOG at his newly opened development studio, Slipgate Ironworks. [http://slipg8.com] It has been reported that the name is temporary. "For the record," Romero wrote, "I'm co-founder of a new game company in the Bay Area and am much better off in many ways than I was at Midway." He also said that he would not reveal anything about the company or the game until 2007.

On , , John Romero announced a new FPS project for the titled "Severity" for both consoles and PC. [ [http://www.gameinformer.com/News/Story/200612/N06.1220.1011.26644.htm Romero Announces New CPL Specific FPS] ] Tom Mustaine (ex-Studio Director at ) will act as Director of Game Development at CPL's new studio.

It is stated that "Severity" will be a multiplayer first person shooter. The game will be built on technology licensed from id Software.

* In 2002, Romero put his heavily modified up for auction on . [ [http://rome.ro/ferrari.htm Brutal Luxury] . Rome.ro. Retrieved .] Some of the modifications included a from the engine compartment into the cockpit next to the passenger's seat which one could plug a into, and tune the engine while the car was running.

* He enjoys listening to . Romero is the one who supplied several Heavy Metal records as source of inspiration for the "Doom" music.Fact|date=August 2007

* Wrote a comic book in high school with "10 Different Ways to Torture Someone"; featured entries such as "Poke a needle all over the victim's body and in a few days . . . watch him turn into a giant scab" and "burn the victim's feet while victim is strapped in a chair." ["Masters of Doom" by David Kushner. Quoted in , Vol. 012, Issue 23. [http://www.weeklystandard.com/Content/Public/Articles/000/000/013/305yuvkp.asp?pg=2] ]

* He makes a guest appearance on an episode of "". In the episode, he is a young employee of Gameavision, pitching his idea for "Doom" to a thoroughly unimpressed Mr. Larrity, who contradicts each one of the game's most noteworthy features. As they talk, they walk the halls of Gameavision headquarters, which are designed to look like a level taken from the game.

In the "Doom II" final level "Icon of Sin", the boss is a giant goat's skull with a fragment missing from its forehead. It says, "To win the game, you must kill me, John Romero!", distorted and in reverse to sound like a demonic chant. One can use the "idclip" cheat to enter the boss and see Romero's severed head which is skewered to a post. The player defeats the boss (without the idclip cheat) by shooting rockets into its exposed brain after activating a lift and riding it; Romero's head functions as its hit detection point; when he "dies", the boss is killed and the game is finished.

The name "Romero" is also written in blood on one of the walls in level 19 "Shipping/Respawning" in "".

Articles on the rise and fall of "Daikatana"

* [http://www.dallasobserver.com/issues/1999-01-14/news/feature2.html "Stormy Weather" article] at the
* [http://www.npr.org/templates/story/story.php?storyId=4803167 "From 'Doom' to Gloom: The Story of a Video Game Flop"] , NPR story on Romero, part of a series of other famous debacles
* [http://www.gamespot.com/features/btg-daikatana/index.html Knee Deep in a Dream: The Story of Daikatana] , a series of behind-the-scenes articles on Romero and his work on Daikatana