The Chicago Stock Exchange was founded in a formal meeting on March 21, 1882. At this time, Charles Henrotin was elected the chairman and president. In April that year, a lease was taken out at 115 Dearborn Street for the location of the exchange and during that month 749 memberships were sold. 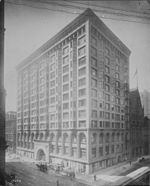 In July 1914, the Exchange closed as a result of World War I, and remained closed until December 11. In October 1915, the basis of quoting and trading in stocks changed from percent to par value to dollars. On April 26, 1920, the Chicago Stock Exchange Stock Clearing Corporation was established. On October 29, 1929, the stock market crashed, resulting in a very difficult time period for the Chicago Stock Exchange, and the stock market in general.

On May 11, 1973, the Midwest Securities Trust Company (MSTC) was established to provide a central depository for securities certificates and to electronically record transfers of stock ownership. In October of the next year, trading hours at the stock exchange were extended to 4pm, and in the following year, a fixed commission system was abolished. In April 1978, the Chicago Stock Exchange launched an Intermarket Trading System (ITS), a system that allows order to be sent from one exchange to another to ensure that customers receive the best execution available.

In the 1980s, the Chicago Stock Exchange made several technological advancements to improve trading. In 1982, the CHX launched the MAX system, which allowed them to be one of the first stock exchanges to provide fully automated order execution. In 1987, the CHX implemented programs to trade Nasdaq securities. 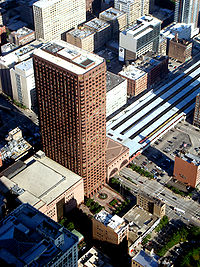 The Chicago Stock Exchange/LaSalle Train Station as viewed from the Sears Tower in July 2008.

In the 1990s, the Exchange had a rebirth, and in 1993 changed its name back to the Chicago Stock Exchange[1] (after being the Midwest Stock Exchange), reflecting its roots and identity within the Chicago financial community. In June 1995, securities settlement dates were shortened from five to three business days following trade date and one year later, the CHX extended its trading hours. The Exchange is now open thirty minutes after the primary market closes. In 1997 the Chicago Stock Exchange began trading exchange-traded funds (ETFs).

At the beginning of the new millennium, several major changes occurred. In April 2001, decimal pricing of all stocks was fully implemented. In 2005, the SEC approved a change of the ownership structure of the CHX from a not-for-profit, member-owned company to a for-profit, stockholder-owned corporation. In that same year, the CHX implemented the Electronic Book trading platform; the predecessor technology of the New Trading Model’s Matching System. In 2006 the Exchange announced regulatory and shareholder approval of an investment in CHX by Bank of America Corporation, Bear Stearns, E*TRADE FINANCIAL Corporation, and Goldman, Sachs & Co. Just last year on February 1, the CHX announced that it has completed the migration to the New Trading Model platform.

The CHX operates as a direct and wholly owned subsidiary of CHX Holdings, Inc., a Delaware corporation. Previously, the Exchange had been constituted as a membership organization which a “seat” on the Exchange conferred both a fractional ownership interest as well as the privilege to trade on the floor. The CHX operates a fully electronic Matching System and provides routing to CHX Institutional Brokers and off-Exchange market makers. The CHX Matching System has been designed to provide broker/dealers with cost efficient executions.

On February 9, 2005, CHX's demutualization plan took effect and CHX (formerly a not-for-profit, non-stock corporation owned by its members) became a wholly owned subsidiary of a holding company, CHX Holdings, Inc. CHX Holdings was formed as a for-profit, stock corporation owned by its shareholders, the former member-owners of CHX. The demutualization plan was approved by CHX's Board of Governors on August 5, 2004, by its members on November 11, 2004 and by the SEC on February 8, 2005. Under the new demutualized structure, CHX continues to operate as a national securities exchange, registered with the SEC.

Trading on the CHX

Publicly traded companies do not need to be listed on the CHX to be traded here. SEC rules allow the CHX to trade stocks listed on other exchanges. Stocks eligible for trading in the CHX Matching System will include NYSE, AMEX and NASDAQ-listed securities.

The CHX Matching System and CHXConnect are execution and routing services operated by the Chicago Stock Exchange. The Matching System provides fully automated cost efficient executions for a wide array of securities and is designed for the messaging rates of today’s trading environment. CHXConnect provides routing services to order-sending participants to off-Exchange Market Makers or other destinations.

The new platform is scalable, reliable and designed for the messaging rates of today’s equity trading environment. The new CHX Matching System performance characteristics should exceed the requirements for classification as an automated market under Regulation NMS.

Upon receipt of an order, the CHX Order Management System (OMS) will validate and route orders to the appropriate matching engine instance. Several matching instances will each handle processing for a set of issue symbols, which can be reallocated among matching engines to re-grade processing loads.

Once the matching engine receives an order, the order’s price is compared with resting limit orders in the book. If a match can be consummated at a price within the NBBO then the orders will be executed.

Orders resting in the book will be matched in price - time priority and according to the ranking. The Matching System matches orders on a share for share basis and inbound odd lot orders can match at prices outside the NBBO.

Current Board of Directors Feb 2008