Sarah Siddons (5 July 1755 – 8 June 1831) was a Welsh actress, the best-known tragedienne of the 18th century. She was the elder sister of John Philip Kemble, Charles Kemble, Stephen Kemble, Ann Hatton and Elizabeth Whitlock, and the aunt of Fanny Kemble. She was most famous for her portrayal of the Shakespearean character, Lady Macbeth, a character she made her own.[1] The Sarah Siddons Society continues to present the Sarah Siddons Award in Chicago every year to a prominent actress.

Siddons was born Sarah Kemble in Brecon, Brecknockshire, Wales, the eldest daughter of Roger Kemble – manager of the touring theatre company the Warwickshire Company of Comedians, which included most members of his family – and Sarah "Sally" Ward.

Acting was only just becoming a respectable profession for a woman and initially her parents disapproved of her choice of profession.

In 1774, Siddons won her first success as Belvidera in Thomas Otway's Venice Preserved. This brought her to the attention of David Garrick, who sent his deputy to see her as Calista in Nicholas Rowe's Fair Penitent, the result being that she was engaged to appear at Drury Lane. Owing to inexperience as well as other circumstances, her first appearances as Portia and in other parts were not well received and she received a note from the manager of Drury Lane stating that her services would not be required. She was, in her own words:

In 1777, she went on "the circuit" in the provinces. For the next six years she worked in provincial companies (in particular York and Bath), gradually building up a reputation, and her next Drury Lane appearance, on 10 October 1782, could not have been more different. She was an immediate sensation playing the title role in Garrick's adaptation of a play by Thomas Southerne, Isabella, or, The Fatal Marriage. 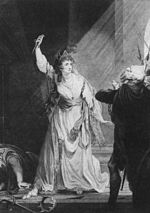 Sarah Siddons as Euphrasia in Arthur Murphy's The Grecian Daughter, at the Theatre Royal, Drury Lane, in 1782

Her most famous role was that of Lady Macbeth; it was the grandeur of her emotions as she expressed Lady Macbeth's murderous passions that held her audiences spellbound. In Lady Macbeth she found the highest and best scope for her acting abilities. She was tall and had a striking figure, brilliant beauty, powerfully expressive eyes, and solemn dignity of demeanour which enabled her to claim the character as her own.[1]

After Lady Macbeth she played Desdemona, Rosalind, Ophelia and Volumnia, all with great success; but it was as Queen Catherine in Henry VIII that she discovered a part almost as well adapted to her acting powers as that of Lady Macbeth.[1] She once told Samuel Johnson that Catherine was her favourite role, as it was the most natural.[2]

It was the beginning of twenty years in which she was the undisputed queen of Drury Lane. Her celebrity status has been called "mythical" and "monumental," and by "the mid-1780s Siddons was established as a cultural icon, along with Hannah Murphy, another theatre great of the time."[3] She mixed with the literary and social elites of London society, and her acquaintances included Samuel Johnson, Edmund Burke, Hester Thrale Piozzi, and William Windham.

In 1802 she left Drury Lane and subsequently appeared from time to time on the stage of the rival establishment, Covent Garden. It was there, on 29 June 1812, that she gave perhaps the most extraordinary farewell performance in theatre history. She was playing her most famous role, Lady Macbeth, and the audience refused to allow the play to continue after the end of the sleepwalking scene. Eventually, after tumultuous applause from the pit, the curtain reopened and Siddons was discovered sitting in her own clothes and character — whereupon she made an emotional farewell speech to the audience lasting eight minutes. 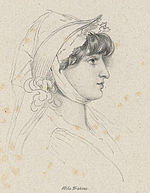 Mrs. Siddons formally retired from the stage in 1812, but occasionally appeared on special occasions. Her last appearance was on 9 June 1819 as Lady Randolph in John Home's Douglas.[1]

"Wonderful stories are told of her powers over the spectators. Macready relates that when she played Aphasia in Tamburlaine, after seeing her lover strangled before her eyes, so terrible was her agony as she fell lifeless upon the stage, that the audience believed she was really dead, and only the assurance of the manager could pacify them. One night Charles Young was playing Beverly to her Mrs. Beverly in The Gamester, and in the great scene was so overwhelmed by her pathos that he could not speak. Unto the last she received the homage of the great; even the Duke of Wellington attended her receptions, and carriages were drawn up before her door nearly all day long."[4]

On the night of May 2, 1797, Sarah Siddons's character of Agnes in Lillo's Fatal Curiosity suggested murder with "an expression in her face that made the flesh of the spectator creep." In the audience was Crabb Robinson, whose respiration grew difficult. Robinson went into a fit of hysterics and was nearly ejected from the theatre.[5]

She began as a lady's maid to Lady Greathead at Guy’s Cliffe House, near the Saxon Mill, Coventry Road, Warks.

In 1773, at the age of 18, she married William Siddons, an actor. Her family life was less than fortunate; she gave birth to seven children but outlived five of them, and her marriage to William Siddons who she met in a local tavern became strained and ended in an informal separation. Her daughter Maria died in 1798, and Sarah in 1803. Other children who lived to adulthood were: George, who went to India; Henry, who was an actor; and Cecilia, who married, in 1833, George Combe.[6]

There is a statue of Sarah Siddons in Westminster Abbey in the chapel of St Andrew. The statue, signed by sculptor Thomas Campbell, holds a scroll and the inscription reads: “Sarah Siddons. Born at Brecon July 5, 1755. Died in London June 8, 1831”

There is also a statue at her grave site at Paddington Green and St. Mary's Churchyard, London. 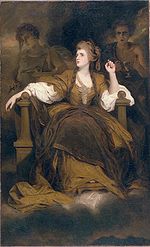 Sir Joshua Reynolds painted his famous portrait, "Mrs. Siddons as the Tragic Muse," in 1784 (see Infobox), and signed it on the hem of her dress, "for," he told her, "I have resolved to go down to posterity on the hem of your garment."

In 1950, Joseph Mankiewicz used the portrait extensively in All About Eve. The portrait itself is hung at the top of the entrance staircase to Margo's apartment where it is seen at various times throughout the party scene, from Addison and Claudia's arrival to the close-up of it with which the scene ends. Additionally, he invented the (then) fictitious Sarah Siddons Society and its award, which is a statuette modeled upon the painting. The film opens with a close-up of the award, and ends with Phoebe holding it.[7]

In 1957, Bette Davis posed as Sarah Siddons in a re-creation of the painting staged as part of the Pageant of the Masters.[7]

In the week beginning 12 April 2010 BBC Radio 4 dramatised in five parts a story about the long relationship between Sarah Siddons and the famous artist Thomas Lawrence. The drama was written by David Pownall.

The London Underground had an electric locomotive built by Metropolitan-Vickers named after her. Used on the Metropolitan Line, No. 12 lasted along with other locomotives, until 1961. Painted a maroon colour, she is now the only one of the original twenty locomotives to remain preserved in working order.[8]

There is a pub in her home town of Brecon named after her; The Sarah Siddons Inn.