Acrostic
This article is about a type of poem. For the word puzzle, see Acrostic (puzzle).

An acrostic (Greek: ákros "top"; stíchos "verse") is a poem or other form of writing in which the first letter, syllable or word of each line, paragraph or other recurring feature in the text spells out a word or a message[1]. As a form of constrained writing, an acrostic can be used as a mnemonic device to aid memory retrieval. A famous acrostic was made in Greek for the acclamation JESUS CHRIST, GOD'S SON, SAVIOUR (Greek: Ιησούς Χριστός, Θεού Υιός, Σωτήρ; Iesous CHristos, THeou Yios, Soter — ch and th being each one letter in Greek). The initials spell ICHTHYS (ΙΧΘΥΣ), Greek for fish – hence the frequent use of the fish as a symbol for Jesus Christ from the early days of Christianity to the present time.

Relatively simple acrostics may merely spell out the letters of the alphabet in order; such an acrostic may be called an 'alphabetical acrostic' or Abecedarius. These acrostics occur in the first four of the five songs that make up the Book of Lamentations, in the praise of the good wife in Proverbs 31, 10-31, and in Psalms 9, 10, 25, 34, 37, 111, 112, 119 and 145 of the Hebrew Bible.[2] Notable among the acrostic Psalms are the long Psalm 119, which typically is printed in subsections named after the letters of the Hebrew alphabet, each of which is featured in that section; and Psalm 145, which is recited three times a day in the Jewish services. Acrostics prove that the texts in question were originally composed in writing, rather than having existed in oral tradition before being put into writing.

Acrostics are common in medieval literature, where they most commonly serve to highlight the name of the poet or his patron, or to make a prayer to a saint. They are most common in verse works but can also appear in prose.

Often the ease of detectability of an acrostic can depend on the intention of its creator. In some cases an author may desire an acrostic to have a better chance of being perceived by an observant reader, such as the acrostic contained in the Hypnerotomachia Poliphili (where the key capital letters are decorated with ornate embellishments), or as in the poem To Doctor Empiric (by Ben Jonson) which is a verse outlined after the word W-O-L-F giving emphasis to, and capitalizing the key letters so such acrostic is relatively easier to discern.[3] However, acrostics may also be used as a form of steganography, where the author seeks to conceal the message rather than proclaim it. This might be achieved by making the key letters uniform in appearance with the surrounding text, or by aligning the words in such a way that the relationship between the key letters is less obvious. This is referred to as null ciphers in steganography, using the first letter of each word to form a hidden message in an otherwise innocuous text.[4] Using letters to hide a message, as in acrostic ciphers, was popular during the Renaissance, and could employ various different methods of enciphering, such as selecting other letters than initials based on a repeating pattern (equidistant letter sequences), or even concealing the message by starting at the end of the text and working backwards.[5]

Secreted in the Dutch national anthem Het Wilhelmus[6](The William) is also an acrostic: the first letters of its fifteen stanzas spell WILLEM VAN NASSOV. This was one of the hereditary titles of William of Orange (William the Silent), who introduces himself in the poem to the Dutch people. This title also returned in 2010 in the Troonrede, the Dutch State of the Union. The first 15 lines formed also WILLEM VAN NASSOV.

There is a classic example of acrostic poem in English written by Edgar Allan Poe is entitled simply "An Acrostic"[7]:

Elizabeth it is in vain you say
"Love not" — thou sayest it in so sweet a way:
In vain those words from thee or L.E.L.
Zantippe's talents had enforced so well:
Ah! if that language from thy heart arise,
Breath it less gently forth — and veil thine eyes.
Endymion, recollect, when Luna tried
To cure his love — was cured of all beside —
His follie — pride — and passion — for he died. 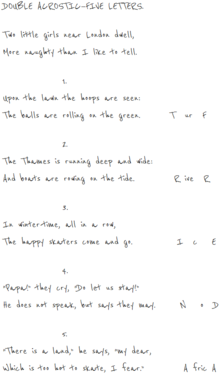 It was while calling one day upon Mrs. Bremer that Lewis Carroll scribbled off this double acrostic on the names of her two daughters, Trina and Freda 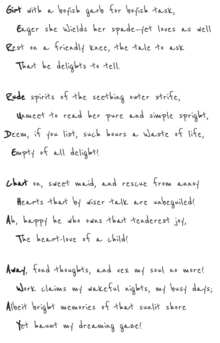 Lewis Carroll wrote this unique double acrostic for Gertrude Chataway. The verses embody her name in two ways — by letters, and by syllables

In Lewis Carroll's Through the Looking-Glass, the final chapter "A Boat, Beneath A Sunny Sky"[8] is an acrostic of the real Alice's name: Alice Pleasance Liddell.

A boat, beneath a sunny sky
Lingering onward dreamily
In an evening of July -

Children three that nestle near,
Eager eye and willing ear,
Pleased a simple tale to hear -

Children yet, the tale to hear,
Eager eye and willing ear,
Lovingly shall nestle near.

Ever drifting down the stream -
Lingering in the golden gleam -
Life, what is it but a dream?

Contained in A Calendar Acrostic is another example where the initial letters spell out the months of the year:

JANet was quite ill one day.
FEBrile trouble came her way.
MARtyr-like, she lay in bed;
APRoned nurses softly sped.
MAYbe, said the leech judicial
JUNket would be beneficial.
JULeps, too, though freely tried,
AUGured ill, for Janet died.
SEPulchre was sadly made.
OCTaves pealed and prayers were said.
NOVices with ma'y a tear
DECorated Janet's bier.

In January 2010, Jonathan I. Schwartz, the CEO of Sun Microsystems, sent an email to Sun employees on the completion of the acquisition of Sun by Oracle Corporation. The initial letters of the first seven paragraphs spelled "Beat IBM".[9]

James May, presenter on the BBC program Top Gear, was fired from the publication Autocar for spelling out a message using the large red initial at the beginning of each review in the publication's Road Test Yearbook Issue for 1992. Properly punctuated, the message reads: "So you think it's really good? Yeah, you should try making the bloody thing up. It's a real pain in the arse."[10]

Acrostics can be more complex than just by making words from initials. A double acrostic, for example, may have words at the beginning and end of its lines, as this example, on the name of Stroud, by Paul Hansford -

Set among hills in the midst of five valleyS,
This peaceful little market town we inhabiT
Refuses (vociferously!) to be a conformeR.
Once home of the cloth it gave its name tO,
Uphill and down again its streets lead yoU.
Despite its faults it leaves us all charmeD. 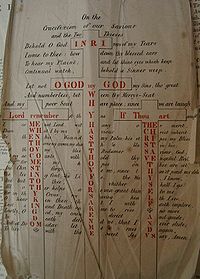 This example can be considered a more complex form of acrostic. This classical poetry is titled Behold, O God![11] written by William Browne published in 1815 in his book "Original Poems By William Browne." The poem has highlighted letters inside its verses such that when they are grouped together, printed as red letters in the manuscript, the letters depict three crosses and the topmost middle cross reads "INRI", in Latin means "Iesus Nazarenus Rex Iudaeorum" translated as "Jesus of Nazareth King of Jews." The crosses contain verses from the New Testament. The left cross contains Luke 23:42 "Lord, remember me when thou comest into thy kingdom." The middle cross contains Matthew 27:46 "O God, my God, why hast thou forsaken me?" The right cross contains Luke 23:39 "If thou art the Christ, save thyself and us." The three being representations of what each of the three spake as they were capitally punished that evening.

BEHOLD, O God! IN RIvers of my tears
I come to thee! bow down thy blessed ears
To hear me, wretch, and let thine eyes (which sleep
Did never close) behold a sinner weep:
Let not, O GOD, MY GOD, my faults through great,
And numberless, betWeen thy mercy's seat
And my poor soul be tHrown! since we are taught,
Thou, LORD, REMEMBER'st thYne, IF THOU [ART] be sought.
I coME not, Lord, witH any oTHEr merit
Than WHat I by my SAviour CHrist inherit:
Be thEN his woundS my balm; his stRIpes my bliss;
My crown his THorns; my deaTh be loST in his.
And thOU, my blesT Redeemer, SAviour, God,
Quit my acCOunts, withHold the VEngeful rod!
O beg for ME! my hOpes on Thee are set;
And ChriST forgiVe, as well as pay tHe debt
The livINg fount, the liFe, the waY, I know,
And but TO thee, O whither Should I go?
All oTHer helps aRe vain: grant thinE to me,
For in thY cross my Saving heaLth must be.
O hearKen then whAt I with Faith implore,
Lest SIN and Death sinK me for evermore.