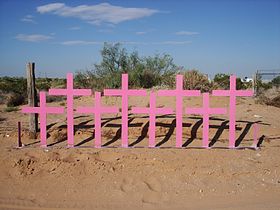 The phenomenon of the female homicides in Ciudad Juárez, called in Spanish the feminicidios ("femicides") and las muertas de Juárez ("The dead women of Juárez"), involves the violent deaths of hundreds of women since 1993 in the northern Mexican city of Ciudad Juárez, Chihuahua, a border city across the Rio Grande from the U.S. city of El Paso, Texas. The estimated homicide toll is speculated to be around 400,[1][2][3] but many local residents believe that the true count of los feminicidios stands at an estimated 5,000 victims. Most of the cases remained unsolved as of 2003,[4] and are still mainly unsolved today.[5]

According to the Organization of American States's Inter-American Commission on Human Rights:

The victims of these crimes have preponderantly been young women, between 12 and 22 years of age. Many were students, and most were maquiladora [manufacturing] workers. A number were relative newcomers to Ciudad Juárez who had migrated from other areas of Mexico. The victims were generally reported missing by their families, with their bodies found days or months later abandoned in vacant lots, outlying areas or in the desert. In most of these cases there were signs of sexual violence, torment, torture or in some cases disfigurement.[6]

According to Amnesty International as of February 2005 more than 370 young women and girls had been murdered in the cities of Ciudad Juárez and Chihuahua.[7]

In November 2005 BBC News reported Mexico's human rights ombudsman José Luis Soberanes as saying that 28 women had been murdered so far in 2005.[8] Despite past and current unsolved murders in August 2006 the federal government dropped its investigation, concluding that no federal laws had been violated.[9]

The most prominent suspects in the Juárez serial case were arrested, following the discovery of body clusters in the areas noted in parentheses.

2001 - García Uribe and González Meza were arrested for the murder of eight victims found in a cotton field near the Association of Maquila Workers in East Juárez (Cotton Field).[13] 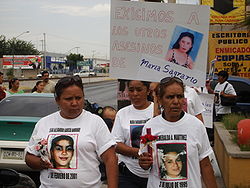 Protest by the families of some of the victims, demanding the punishment of the killers

Over 600 crosses set up in front of the student union at the University of Utah in remembrance of women who were killed near the U.S./Mexico border

A group of mothers, families, and friends of the victims, called Nuestras Hijas de Regreso a Casa A.C. ("Civil Association for the Return Home of Our Daughters") was formed to raise awareness about the situation and put pressure on the Mexican government to pay attention to these cases, some of which have gone unsolved for 13 years. Members of the group, including co-founder Norma Andrade, demand that proper investigations be carried out.

Another family organization, Voces sin Eco ("voices without echo") was founded in 1998. They painted pink crosses on black telephone poles to draw attention to the problem and align themselves with family values.[14]

There are several feminists and feminist organizations working in Ciudad Juárez to improve the situation of women. Documentación y Estudios de Mujeres (DEMAC), a Women's Studies and Research Center in Juárez, is one such organization. DEMAC works to improve the lives of women in crisis by teaching narrative writing skills to women ages 7 to 70. Seeking to restore the rights of one woman at a time and rescue another side of Mexican history, the center is launching a project called "Reading My City" to wake up to what is happening in the city. [15] Casa Amiga, Ciudad Juárez's first Rape Crisis Center founded in 1999, is another organization seeking to help women in Ciudad Juárez. The organization initially focused on sexual violence and now helps women and families who have experience any form of violence in their lives by providing psychological help for parents, women and children and by intervening in cases of domestic violence. Both organizations acknowledge that a culture of impunity is a crucial factor in causing the violence and that unemployment and low wages compound the problem. [15]

Pink crosses and offerings for the murdered women of Juárez at Olvera Street, Los Angeles, on the Day of the Dead

In 1999, singer Tori Amos reacted to the accounts of the murders with her song "Juárez" on the album To Venus And Back.

In 2000, El Paso post-hardcore band At the Drive-In released a music video for their song "Invalid Litter Dept." that details the deaths. The video features several photos of newspaper clippings and articles about the murders.

In 2001, filmmaker Lourdes Portillo released one of the first documentaries dedicated to the victims of the murders, Señorita Extraviada.

An informal group, which the press named Las Mujeres de Negro ("the women in black"), originated in November 2001 in the city of Chihuahua, following the discovery of eight corpses together. They attended the protest, which interrupted the celebration of the Mexican Revolution, wearing black tunics (as a sign of mourning) and pink hats. Since then, they have marched across the desert from Chihuahua to Juárez and planted crosses (sometimes with plastic limbs attached) in prominent places.[14]

In 2001 Gabriella “Azul Luna” Parra founded Las ViejasKandalosas, a collective of artists with a mission to denounce the murders of women in Ciudad Juárez, Mexico through art. She organized various multimedia shows, the first being EsesKandalo in 2001 at Self-Help Graphics & Art in East Los Angeles. In February 2002 she and Lorena Mendez-Quiroga led a caravan (from Los Angeles to Ciudad Juárez) to the Instituto Nacional de Bellas Artes (INBA) Museum in Ciudad Juárez for a ViejasKandalosas three-day protest event that included a bi-national exhibit, a press conference with Diana Washington Valdez, and a candlelight procession through the streets with community and visiting artists.

In 2002, Mexican journalist, novelist and essayist Sergio González Rodríguez published Huesos en el Desierto, ("Bones in the Desert") one of the most comprehensive researchs on these murders and its social and political causes on book form.[16] Sergio González Rodríguez claims that, during the course of his research for the book, which discovered links between organized crime, local entrepreneurs and local and federal authorities, he suffered death threats, and was kidnapped and tortured.[17]

In 2002, as part of the art activists from Los Angeles that caravanned to Ciudad Juárez for the INBA protest exhibit, Rigo Maldonado and Victoria Delgadillo, co-curated the first internationally acknowledged exhibit on these femicides at the Social & Public Arts Resource Center (SPARC) in Venice, California.[18] The exhibit was called Hijas de Juárez, and included 45 major artists from the Los Angeles area. In 2002, details and images of victims were not readily available via the internet or libraries prompting both curators, the SPARC gallery coordinator Jennifer Araujo, artist/filmmaker Patricia Valencia and her friend/writer Max Blumenthal to regroup in Ciudad Juárez to collect data and interview victim families. In 2003, Victoria Delgadillo & Rigo Maldonado’s written account on the curatory process for this exhibit was published in Aztlán an Academic Chicano Journal, through the University of California, Los Angeles (UCLA) press. The article was entitled “Journey to the Land of the Dead: A Conversation with the Curators of the Hijas de Juárez Exhibit” [Volume 28, Number 2 / Fall 2003]. For their work on the Hijas de Juárez exhibit and for creating public awareness through art, Rigo Maldonado and Victoria Delgadillo received awards from the Instituto Cultural de León, Guanajuato (Mexico) in 2003, La Universidad Autónoma de Sinaloa (Mexico) in 2003, and the Los Angeles City Council (United States) in 2002.

In the same year Polish journalists Eliza Kowalewska and Grzegorz Madej released a TV series about crimes in Juárez.[19] Journalists cooperated with crime experts Robert Ressler and Candice Skrapec. This series was shown on Polish television TVN in 2003.

In 2003, journalist Max Blumenthal won the Online News Association independent feature award for his investigative article in Salon.com, "Day of the Dead",[20] which examined the murders and the connection between them and the policies of the corporations with factories in the border city.[21]

In November 2003, UCLA Chicano Studies Professors Alicia Gaspar de Alba and Chon Noriega organize a conference called “The Maquiladora Murders, or who is Killing the Women of Juárez?” at the University of California, Los Angeles, bringing victim families, and other notable guest speakers to present to students and community members.

In 2003, Eve Ensler demanded justice from the Special Prosector and vowed to return with support from around the world, and established a V-Day march in February 2004 with over 7,000 participants including actresses Sally Field and Jane Fonda.[22]

In 2004, Roberto Bolaño's novel 2666 centered around the murders in a fictitious town called Santa Teresa, widely acknowledged as an alias for Ciudad Juárez.[23]

In 2004, Greek documentary team Exandas, released a production titled "Juárez, City of the Dead, women" featuring interviews with several relatives, maquiladora workers and owners and showcasing police corruption, evidence tampering practices and collaboration with one of the Mexican drug cartels, whose members emerge as the most likely culprits.

In 2004, USA musician Bugs Salcido[24] released a concept album titled "The Juárez Murders" featuring David Lowery, David Immerglück, Martin Pradler, Jeff Trott, & Alan Weatherhead. Proceeds from sales of the album and from his live concerts have gone to aid the families of the victims and the rape crisis center in Juárez. “. . .I do hope that ultimately, people are left with a feeling of hope after hearing this music,” says Salcido.

In 2005, native of the El Paso/Juárez border, Alicia Gaspar de Alba author of various works of poetry, fiction, and nonfiction, and artist in Las Hijas de Juárez exhibit publishes her novel "Desert Blood: The Juárez Murders", which she had been researching since 1998.

To protest the lack of progress in the cases, a huge free concert was held by famous Latin artists such as Alejandro Sanz, Alex Ubago, Manu Chao, Lila Downs and others on September 18, 2005 in Mexico City's central Zócalo square.[25]

On May 30, 2005, President Vicente Fox told reporters that the majority of the Juárez killings had been resolved and the perpetrators placed behind bars. He went on to criticize the media for "rehashing" the same 300 or 400 murders, and said matters needed to be seen in their "proper dimension".[26]

In 2006, Diana Washington Valdez published The Killing Fields: Harvest of Women [Peace at the Border/California/First Ed.], an investigative book in English about the Juárez women's murders, drug cartels and government corruption in Mexico. The ebook version was titled Harvest of Women: Safari in Mexico.

In 2006, Los Angeles filmmaker Lorena Mendez produced Border Echoes, a documentary about the Juárez women's murders based on nearly 10 years of investigation. She collaborated with Diana Washington Valdez for the film. Azul Luna co-produced.

In 2006, a book of poems on the Juárez women's murders was published by White Pine Press: Secrets in the Sand: The Young Women of Juárez by Marjorie Agosín.[27]

In 2007 The Daughters of Juárez by 11-time Emmy award-winning journalist Teresa Rodriguez was published, the most recent book on the murders. Teresa Rodriguez is a reporter for Univisión, the largest Spanish-language television network in the United States. There, she co-anchors the critically acclaimed and award winning news magazine Aqui y Ahora. She has been investigating and reporting on the Juárez murders for over 13 years.

In 2007, Toronto filmmakers Alex Flores and Lorena Vassolo released Juárez,[28] a documentary film about the murders.

In 2008, the artist Swoon displayed a paper-cutout memorial of victim Silvia Elena in the Chelsea art gallery Honeyspace.[29] She displayed another version of the piece on a wall in San Francisco's Mission District.

In 2009, Backyard (El traspatio) was released in Mexico. Directed by Carlos Carrera (The Crime of Father Amaro) and screenwritten by Sabina Berman. This film was part of the 2009 Vancouver International Film Festival, where an extra screening had to be scheduled because of the interest it generated.

In 2010, a book of poems on the Juárez women's murders was published by University of Arizona Press: Each and Her by Valerie Martínez.[30]

In 2011, Judithe Hernández produced a solo exhibition, La Vida Sobre Papel, concerned with the Juárez femicides. According to the Chicago Weekly, "The only thing as conspicuous as the artist’s skill is her message: being human is hard, a woman harder, and life as a Latina occasionally downright grisly."[31]