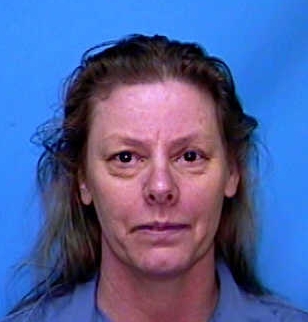 Aileen Carol Wuornos (born Aileen Carol Pittman; February 29, 1956 – October 9, 2002) was an American who killed seven men in between 1989 and 1990, later claiming they d or attempted to rape her while she was working as a . She was convicted and sentenced to death for six of the murders, and via on October 9, 2002.

Wuornos was born in to Diane Pratt and Leo Pittman. Pratt was 14 years old when she married Pittman on June 3, 1954. Pratt and Pittman had two children; Keith was born in 1955 and Aileen in 1956. Less than two years into their marriage, and just a few months before Wuornos was born, Pratt d Pittman. Pittman was a child molester who spent most of his life in and out of prison and mental hospitals. Wuornos never knew her father, as he was imprisoned for the rape of a 7-year-old girl shortly before she was born and strangled in prison in 1969.

In 1960, Pratt abandoned the children, leaving them with their maternal grandparents, Lauri and Britta Wuornos. They were legally adopted on March 18, 1960 by the Wuornos and took their surname.

In July 1971, Britta Wuornos died of , after which Wuornos and her brother became wards of the court. Wuornos ran away from home and entered into prostitution.

In 1976, Wuornos hitchhiked to , where she met 70-year-old yacht club president Lewis Gratz Fell. They married that same year, and the news of their nuptials was printed in the local newspaper's society pages. However, Wuornos continually involved herself in confrontations at their local bar and was eventually sent to jail for assault. She also hit Fell with his own cane, leading him to get a against her, after which she returned to Michigan.facts|date=October 2008

On July 17, her brother Keith died of throat cancer and Wuornos acquired $10,000 from his . Wuornos and Fell divorced on July 21 after nine weeks of marriage.facts|date=October 2008

On July 4, 1987, police detained Wuornos and Moore at a bar for questioning regarding an incident in which they were accused of with a beer bottle.

On March 12, 1988, Wuornos accused a Daytona Beach bus driver of assault. She claimed that he pushed her off the bus following a confrontation. Moore was listed as a witness to the incident.

Wuornos and Moore abandoned Peter Siems' car after they were involved in an accident on July 4, 1990, after which Wuornos' palm print was found. Witnesses who had seen the women driving the victims' cars provided police with their names and descriptions, resulting in a media campaign to locate them. Police also found some of the victims' belongings in pawnshops and retrieved fingerprints, which matched those found in the victims' cars and on Wuornos' arrest record.

Wuornos went to trial for the murder of Richard Mallory on January 14, 1992. Under Florida's , the prosecution introduced evidence related to her other crimes in order to show a pattern. Wuornos was convicted for Richard Mallory's murder on January 27, 1992 with help from Moore's testimony. At her sentencing, psychiatrists for the defense testified that Wuornos was mentally unstable and had been diagnosed with . She was sentenced to death on January 31, 1992.

On March 31, 1992, Wuornos pleaded no contest to the murders of Dick Humphreys, Troy Burress and David Spears, saying she wanted to "get right with God". In her statement to the court, she averred, "I wanted to confess to you that Richard Mallory did violently rape me as I've told you. But these others did not. [They] only began to start to." On May 15, 1992, Wuornos was given three more death sentences.

In June 1992, Wuornos pleaded guilty to the murder of Charles Carskaddon and received her fifth death sentence in November 1992. That same month, "" reporter Michele Gillen uncovered evidence that Mallory had served 10 years for violent rape in another state. The judge refused to allow this to be admitted in court as evidence and denied Wuornos' request for a .

In February 1993, Wuornos pleaded guilty to the murder of Walter Gino Antonio and was sentenced to death again. No charges were brought against her for the murder of Peter Siems, as his body was never found. In all, she received six death sentences.

Wuornos told several inconsistent stories about the killings. She claimed initially that all seven men had raped her while she was working as a prostitute then later recanted the claim of self-defense. During an interview with filmmaker in which she thought the cameras were off, she told him that it was in fact self-defense, but she could not stand being on death row—12 years at that point—and had to die.

Wuornos' to the U.S. Supreme Court was denied in 1996. In 2001, she announced that she would not issue any further appeals against her death sentence. She petitioned the for the right to fire her legal counsel and stop all appeals, saying, "I killed those men, robbed them as cold as ice. And I'd do it again, too. There's no chance in keeping me alive or anything, because I'd kill again. I have hate crawling through my system...I am so sick of hearing this 'she's crazy' stuff. I've been evaluated so many times. I'm competent, sane, and I'm trying to tell the truth. I'm one who seriously hates human life and would kill again." [cite news | first=John | last=Zarrella | title=Wuornos' last words: 'I'll be back' | date=2002-10-15 | url =http://archives.cnn.com/2002/LAW/10/09/wuornos.execution/index.html | work =CNN | accessdate = 2008-10-02 |archiveurl=http://www.webcitation.org/5bGafqK0R |archivedate=2008-10-02] Some argued that she was in no state for them to honor such a request.

Florida Governor instructed three psychiatrists to give Wuornos a 15-minute interview. The test for competency requires the psychiatrist(s) to be convinced that the condemned person understands both that they will die and for which crime(s) they are being executed. All three judged her mentally fit to be executed.

Wuornos later started accusing the prison matrons of abusing her. She accused them of tainting her food, spitting on it, serving her potatoes cooked in dirt, and her food arriving with . She also claimed overhearing conversations about "trying to get me so pushed over the brink by them I'd wind up committing suicide before the [execution] " and "wishing to rape me before execution." She also complained of strip searches, being handcuffed so tightly that her wrists bruised any time she left her cell, door kicking, frequent window checks by matrons, low water pressure, on her mattress and "cat calling ... in distaste and a pure hatred towards me." Wuornos threatened to boycott showers and food trays when specific officers were on duty. "In the meantime, my stomach's growling away and I'm taking showers through the sink of my cell."citequote

During the final stages of the appeal process she gave a series of interviews to Broomfield. In her final interview shortly before her execution she claimed that her mind was being controlled by "sonic pressure" to make her appear crazy and described her impending death to being taken away by s on a space ship. [cite web| url = http://www.aileenfilm.com/summary.php| title = Aileen: Life and Death of a Serial Killer (Film Summary)| accessdate = 2008-09-24| last = Broomfield| first = Nick] When Broomfield attempted to get her to speak about her earlier claims to have killed her victims in self-defense, Wuornos became livid, cursed Broomfield, and terminated the interview. Broomfield later met Dawn Botkins, a childhood friend of Wuornos', who told him, "She's sorry, Nick. She didn't give you the finger. She gave the media the finger, and then the attorneys the finger. And she knew if she said much more, it could make a difference on her execution tomorrow, so she just decided not to." [cite web| url = http://popmatters.com/film/reviews/a/aileen-life-and-death.shtml| title = A Lot of Illegalness Going On| accessdate = 2008-09-24| last = Fuchs| first = Cynthia| date = 2004-02-12| publisher = PopMatters |archiveurl=http://www.webcitation.org/5bGbl3kEM |archivedate=2008-10-02]

Wuornos was executed via on October 9, 2002. [ cite web|url=http://www.dc.state.fl.us/oth/deathrow/execlist.html |title=Execution List: 1976 - present |accessdate=2008-09-26 |publisher=Florida Department of Corrections |archiveurl=http://www.webcitation.org/5b8tZ3SJc |archivedate=2008-09-27 ] She was the tenth woman in the United States to be executed since the reintroduction of the death penalty in 1976 and the second woman ever executed in Florida.

After her execution, Wuornos was cremated. Her ashes were taken by Dawn Botkins to her native Michigan and spread beneath a tree. She requested that 's song "Carnival" be played at her funeral. Natalie Merchant commented on this when asked why her song was played during the credits of the documentary "":

:"When director Nick Broomfield sent a working edit of the film, I was so disturbed by the subject matter that I couldn't even watch it. Aileen Wuornos led a tortured, torturing life that is beyond my worst nightmares. It wasn't until I was told that Aileen spent many hours listening to my album while on and requested "Carnival" be played at her funeral that I gave permission for the use of the song. It's very odd to think of the places my music can go once it leaves my hands. If it gave her some solace, I have to be grateful". [ cite web |url=http://www.nataliemerchant.com/news/announcements/3-2005/aileenWuornosDoc-3-2005.php |title=News: Aileen Wuornos Documentary |accessdate=2008-09-26 |publisher=NatalieMerchant.com |archiveurl=http://www.webcitation.org/5bGc5pSby |archivedate=2008-10-02 ]

Broomfield later stated::"I think this anger developed inside her. And she was working as a prostitute. I think she had a lot of awful encounters on the roads. And I think this anger just spilled out from inside her. And finally exploded. Into incredible violence. That was her way of surviving... I think Aileen really believed that she had killed in self-defense. I think someone who's deeply psychotic can't really tell the difference between something that is life threatening and something that is a minor disagreement; that you could say something that she didn't agree with, she would get into a screaming black temper about it. And I think that's what had caused these things to happen. And at the same time, when she wasn't in those extreme moods, there was an incredible to her." [cite web| url = http://transcripts.cnn.com/TRANSCRIPTS/0402/26/pzn.01.html| title = Transcript interview Nick Broomfield on Paula Zahn NOW| accessdate = 2006-08-12| date = 2004-02-26| work = CNN |archiveurl=http://www.webcitation.org/5bGcGsAcy |archivedate=2008-10-02]

An tic adaptation of Wuornos' life events premiered at 's on June 22, 2001. Entitled "Wuornos", the opera was written by /librettist , conducted by Mary Chun, and produced by the Jon Sims Center for the Arts. [ cite web|url=http://www.wuornos.org/ |title=Welcome to the operatic world of Wuornos! |accessdate=2008-09-26 |archiveurl=http://www.webcitation.org/5bGcuOhsb |archivedate=2008-10-02 ]