In sports, dribbling refers to the maneuvering of a ball around a defender through short skillful taps or kicks with either the legs (football/soccer), hands (basketball), stick (bandy) or swimming strokes (water polo). The purpose of such an action is to bring the ball past a defender legally and to create opportunities to score. 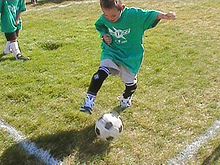 In association football (soccer), a dribble is one of the most difficult ball skills to master and one of the most useful attacking moves. In typical game play, players attempt to propel the ball toward their opponents' goal through individual control of the ball, such as by dribbling (running with the ball close to their feet).

Dribbling is often invaluable especially in the third part of a pitch or at the wings, where most attacks take place. Dribbling creates space in tight situations where the dribbler is marked (closely guarded by a defender), and the dribbler can either score or create scoring chances after a successful dribble. However, dribbling, if poorly mastered and used, may result in the loss of possession either when the ball is intercepted or tackled by a defender.

When used appropriately, a good dribbler is often hard to dispossess; unsuccessful tackles (which do not reach the ball) may result in a useful free kick situation and a reprimand for the offender in the form of a penalty card

Early references to dribbling come from accounts of medieval football games in England. For example, Geoffrey Chaucer offered an allusion to such ball skills in fourteenth century England. In the Canterbury Tales (written some time after 1380) he uses the following line: "rolleth under foot as doth a ball".[1] Similarly at the end of the 15th century comes a Latin account of a football game with features of modern soccer which was played at Cawston, Nottinghamshire, England. It is included in a manuscript collection of the miracles of King Henry VI of England. Although the precise date is uncertain it certainly comes from between 1481 and 1500. This is the first account of an exclusively "kicking game" and the first description of dribbling: "[t]he game at which they had met for common recreation is called by some the foot-ball game. It is one in which young men, in country sport, propel a huge ball not by throwing it into the air but by striking it and rolling it along the ground, and that not with their hands but with their feet... kicking in opposite directions". It is known that dribbling skills were a key part of many nineteenth century football games at English public schools with the earliest reference to ball passing coming in 1863 rules of The Football Association. 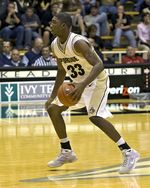 In basketball, dribbling is the legal method of advancing the ball by oneself, as opposed to passing it to another player or shooting for the basket. It consists of bouncing the ball on the floor continuously with one hand while walking or running down the court.

James Naismith's original rules said nothing about dribbling, merely stating that passing the ball was the legal way of advancing it. Players soon developed the strategy of "passing to themselves", which Naismith himself both endorsed and admired for its ingenuity, and which evolved into the dribble as it is known today.

The dribble allows for much faster advancement and thus more opportunities for scoring. It also provides an opportunity for a crafty player on the opposing team to "steal" the ball in mid-bounce. Once a player stops dribbling the ball and holds it, the player normally must either pass it to another player or take a shot; if the player dribbles and then holds the ball in any way (either grasping it with his hands or arms, or "palming" it, i.e. holding it too much toward its underside during the act of dribbling) then continues to dribble, then the referee stops the play, signals either "double dribble" or "carrying", and turns the ball over to the other team. A "double dribble" may also be called if the player tries to dribble with both hands at the same time.

Dribbling should be done with finger pads and the fingers should be relaxed and spread, The wrist should be pushing the basketball, and the forearm should be moving up and down. Skilled ball handlers bounce the ball low to the ground, reducing the risk of a defender reaching in to steal the ball. Adept dribblers can dribble behind their backs, between their legs and change the speed of the dribble, making the player difficult to defend, and opening up options to pass, shoot or drive with the ball.

The National Association of Basketball Coaches (NABC) was founded in 1927 to oppose a move to eliminate dribbling from the sport. 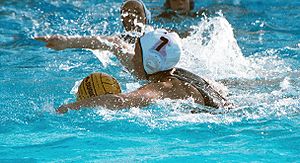 Attacker (7) advances the ball by dribbling

In water polo, dribbling is the technique of moving the ball while swimming forward. The ball is propelled ahead of the player with the wake created by alternating armstrokes, and often accompanied by occasional nudges using the nose or forehead. Since ball contact is minimal, this creates advantage for the ball carrier advancing the ball; the defender may not make contact unless the attacker is touching the ball. Using short, and rapid arm strokes with high elbows, the dribbling player is often able to shield the ball from tackling attempts by the opposing team, particularly those chasing from behind or approaching adjacently. This aggressive defensive technique enures any tackling attempts, successful or not, risk potential injury as the turbulent elbow motion is considered legal by FINA, and so a defending player must avoid contact in his attempts to steal the ball from the dribbler.