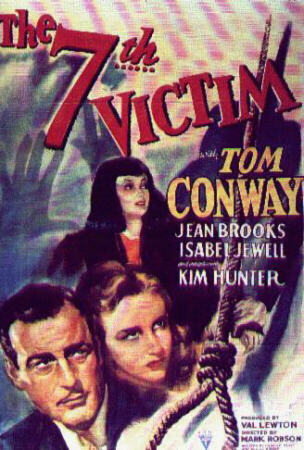 Mary, a young woman () at Miss Highcliff's boarding school, finds out that her sister Jacqueline (Brooks), who is her only relative, has gone missing and has not paid her tuition in months. The school officials tell her she can only stay on if she works for the school, to pay her tuition.

Mary decides to leave school and try to find her sister. She returns to New York City, and finds that her sister had sold her cosmetics business eight months earlier. She locates the apartment Jacqueline was renting, and finds the only things in the room are a chair and a noose hanging from the ceiling. Knowing that her sister has never feared death only makes Mary more anxious and determined to find her.

Her investigation leads to her Jacqueline's secret husband Gregory Ward (), a failed poet (Erford Gage), and a mysterious psychiatrist, Dr. Judd (). A private detective (Lou Lubin) helps her in her investigation, but is killed.

Dr. Judd helps her locate the sister, who turns out to be hiding from a Satanic cult her co-workers were part of called the . During the investigation, Ward falls in love with Mary, his sister-in-law. Meanwhile, Jacqueline is kidnapped by the cult members who insist that she kill herself, because the rules of the cult state that anyone who talks about the cult must die. She would be the seventh person condemned under these rules, hence the film's title.

However, the cult has rules against violence, and decides that Jacqueline, who is suicidal anyway, should kill herself. When she refuses, the cult members let her leave, only to be stalked on the streets by an . She escapes and returns to Mary's apartment, which is next to her own. Before she can enter though, she meets her neighbor, a deathly ill young woman (Elizabeth Russell). The woman tells her she’s afraid to die, but she is tired of keeping quiet and fearing death. She decides to have a night out before she dies.

Jacqueline, having lost the will to live, enters the room she rented and kills herself. The sick woman walks down the stairs dressed for a night out and hears a thud, but thinks nothing of it.

"The Seventh Victim" may be regarded as an unofficial prequel to Lewton's 1942 film "Cat People." Tom Conway's character Dr. Judd appears in both films, and Elizabeth Russell, who plays Mimi, the dying woman, in this film, reappears (in the same clothes) as the unnamed "cat woman" (she also appears as a different character in "").

Some critics have suggested that it is in fact a sequel to "Cat People." This interpretation suggests that Judd was not killed, but only severely injured, when attacked by Irena-as-panther in "Cat People," and that a scene where Judd tells a poet who is fascinated with the suicidal Jacqueline that he once knew a beautiful and mysterious woman who became a raving lunatic is a reference to Irena.

"The Seventh Victim" has been praised for the shadowy camera work by Musuraca, which prefigured much film noir imagery, including possibly the shower scene in 's "Psycho" (1960). (However, the shower murder scene was included in the original novel "Psycho" (1959) by .)

The film was initially criticized in reviews for having too many characters and a storyline that doesn't always make sense. (According to the film's DVD commentary, scenes containing additional story lines, some that may have made the film clearer, were cut before the film's release.) Most controversially, the film resolves with the suicide of one of the main characters (contrary to the spirit if not the letter of the ), and is possibly the only film score of the period to end in a minor key. The story goes that Lewton was warned not to make a film with a message, and he replied that this film "did" have a message: "Death is good."

The contrast between the innocent, feminine and domestically-oriented Mary (whose love of children is emphasized when she gets a job at a kindergarten) and the worldly, glamorous and doomed businesswoman Jacqueline can be read as implicitly anti-feminist.

Critic has cited this as his favorite horror film. It is the only movie of that genre in his list of 100 favorite movies. [http://www.jonathanrosenbaum.com/?p=8163]