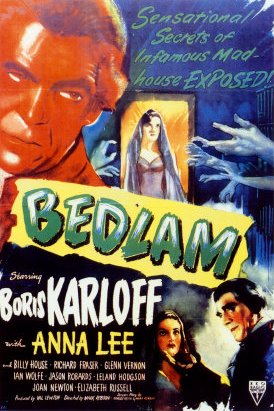 
"Bedlam" (fy|1946) is a film starring and , and was the last in a series of stylish B films produced by for . The film was inspired by 's "", and Hogarth was given a writing credit.

Set in , England, the film focuses on events at St. Mary's of Bethlehem Asylum, a fictionalized version of , also known as "Bedlam". After an acquaintance of aristocrat Lord Mortimer dies in an attempt to escape from the asylum, apothecary general Master George Sims (played by Karloff, a fictionalized version of an infamous head physician at Bethlem, ) appeases Mortimer by having his "loonies" put on a show for him. Mortified by the treatment of the patients, Mortimer's protege Nell Bowen (Lee) seeks the help of Whig politician John Wilks to reform the asylum. Mortimer and Sims conspire to committ Nell to the asylum, where her initial fears of the fellow inmates do not sway her sympathetic commitment to improving their conditions. Frustrated by Nell's progress with the inmates, Sims threatens her with his strongest "cure" but his attempt is thwarted by the very inmates that Nell helped. Ultimately, Sims is deposed and Nell is rescued by her friend who had counseled her through the whole process.

The film has been released on DVD by as part of a double release with "Isle Of The Dead" and as part of the "Val Lewton Horror Collection". [cite news
last = Scapperotti
first = Dan
title = Out of the SHADOWS
work = Fangoria
publisher = Starlog Group
date = 2008-01-08
url = http://www.fangoria.com/fearful_feature.php?id=5704
accessdate = 2008-01-31] It features a commentary by Tom Weaver.