A dozen (common abbreviated doz or dz) is a grouping of approximately twelve. The dozen may be one of the earliest primitive groupings, perhaps because there are approximately a dozen cycles of the moon or months in a cycle of the sun or year. The dozen is convenient because its multiples and divisors are convenient: 12 = 2 × 2 × 3, 3 × 4 = 2 × 6, 60 = 12 × 5, 360 = 12 × 30. The use of twelve as a base number, known as the duodecimal system (also as dozenal), probably originated in Mesopotamia (see also sexagesimal). Twelve dozen (122 = 144, the duodecimal 100) are known as a gross; and twelve gross (123 = 1,728, the duodecimal 1,000) are called a great gross, a term most often used when shipping or buying items in bulk. A great hundred, also known as a small gross, is 120 or ten dozen (a dozen for each finger on both hands). A baker's dozen, also known as a long dozen, is thirteen, while a decimal dozen is only ten.

The English word dozen comes from the old form of the French word douzaine, meaning "a group of twelve" ("Assemblage de choses de même nature au nombre de douze" - (translation: A group of twelve things of the same nature as defined in the eighth edition of the Dictionnaire de l'Académie française).[1][2][3] This French word [4] is a derivation from the cardinal number douze ("twelve", from Latin duodĕcim) and the collective suffix -aine (from Latin -ēna), a suffix also used to form other words with similar meanings such as quinzaine (a group of fifteen), vingtaine (a group of twenty), centaine (a group of one hundred), etc. These French words have synonymous cognates in Spanish: docena,[5][6][7] quincena, veintena, centena, etc. English dozen, French douzaine, German Dutzend, Dutch dozijn and Spanish docena, are also used as indefinite quantifiers to mean "about twelve" or "many" (as in "a dozen times", "dozens of people"). 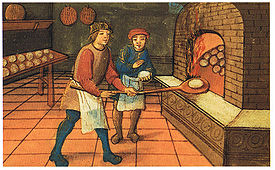 The "baker's dozen" may have originated as a way for bakers to avoid being blamed for shorting their customers.

A baker's dozen, devil's dozen, long dozen, or long measure is 13, one more than a standard dozen. The oldest known source, but questionable explanation for the expression "baker's dozen" dates to the 13th century in one of the earliest English statutes, instituted during the reign of Henry III (1216–1272), called the Assize of Bread and Ale. Bakers who were found to have shortchanged customers (some variations say that they would sell hollow bread) could be subject to severe punishment. To guard against the punishment of losing a hand to an axe, a baker would give 13 for the price of 12, to be certain of not being known as a cheat. Specifically, the practice of baking 13 items for an intended dozen was insurance against "short measure", on the basis that one of the 13 could be lost, eaten, burnt, or ruined in some way, leaving the baker with the original legal dozen. The practice can be seen in the guild codes of the Worshipful Company of Bakers in London.

4+5+4 arrangement with aspect ratio near 11:6
Thirteen round items in a rectangular space using hexagonal close packing.

However, there is some doubt over whether this is the real explanation for the expression, because baking 13 instead of 12 units has been good practice all over Europe, not only in England.[citation needed] It also seems unusual that only bakers deliver 13 in a dozen, and not, for example, butchers. An alternative explanation for why specifically bakers deliver 13 in a dozen has been found in the tidy way 13 disks (loaves, cookies, biscuits, etc.) can pack a rectangle (baking tray) of appropriate proportions.[citation needed] Packing trays have a 3:2 aspect ratio, and the most efficient two-dimensional array is hexagonal close packing, which has sixfold symmetry, such that each baked item is equidistant from its six nearest neighbours. The corners of a cookie sheet heat up and cool off faster than the edges and interior, so any item placed near a corner will not bake at the same rate as the other items. A 4+5+4 arrangement provides the dense hexagonal packing while avoiding corners, and would have been discovered empirically by bakers with the goal of baking the maximum number per batch with optimal uniformity.[citation needed]

According to the 1811 Dictionary of the Vulgar Tongue, by Capatin Grose, a Baker's Dozen is "Fourteen; that number of rolls being allowed to the purchaser of a dozen".[8] A decimal dozen is a design of cartons for bottled wine that holds two rows of five bottles, developed by the Helm Wines winery, Canberra, Australia, to replace traditional dozen-bottle cartons. The quoted motivation is that demographics reports show that women buy more than 50 percent of wine in Australia. According to the OH&S regulations, a woman should not lift more than 15 kilograms (33 lbs), which is only the minimum gross weight of a standard 12-bottle carton, which can weigh up to 20 kg for some types of bottles. [9]

In 2005 it was a nominee for the ACT Occupational Health and Safety Award in the category "Best Solution to an Identified Workplace Health and Safety Issue" for addressing "the manual handling issues by introducing a ten bottle carton in a 2 X 5 configuration".[10]