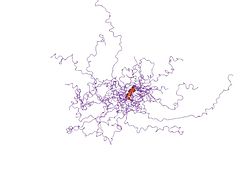 An ensemble of NMR structures of the Thylakoid soluble phosphoprotein TSP9, which shows a largely flexible protein chain.[1]

Many disordered proteins have the binding affinity with their receptors regulated by post-translational modification, thus it has been proposed that the flexibility of disordered proteins facilitates the different conformational requirements for binding the modifying enzymes as well as their receptors.[4] Intrinsic disorder is particularly enriched in proteins implicated in cell signaling, transcription and chromatin remodeling functions.[5][6]

Many unstructured proteins undergo transitions to more ordered states upon binding to their targets. The coupled folding and binding may be local, involving only a few interacting residues, or it might involve an entire protein domain. It was recently shown that the coupled folding and binding allows the burial of a large surface area that would be possible only for fully structured proteins if they were much larger.[7] Moreover, certain disordered regions might serve as "molecular switches" in regulating certain biological function by switching to ordered conformation upon molecular recognition like small molecule-binding, DNA/RNA binding, ion interactions etc.[8].

The ability of disordered proteins to bind, and thus to exert a function, shows that stability is not a required condition. Many short functional sites, for example Short Linear Motifs are over-represented in disordered proteins.

Intrinsically unstructured proteins are characterized by a low content of bulky hydrophobic amino acids and a high proportion of polar and charged amino acids. Thus disordered sequences cannot bury sufficient hydrophobic core to fold like stable globular proteins. In some cases, hydrophobic clusters in disordered sequences provide the clues for identifying the regions that undergo coupled folding and binding. Such signatures are the basis of the prediction methods below.

Intrinsically unfolded proteins, once purified, can be identified by various experimental methods. Folded proteins have a high density (partial specific volume of 0.72-0.74 mL/g) and commensurately small radius of gyration. Hence, unfolded proteins can be detected by methods that are sensitive to molecular size, density or hydrodynamic drag, such as size exclusion chromatography, analytical ultracentrifugation, Small angle X-ray scattering (SAXS), and measurements of the diffusion constant. Unfolded proteins are also characterized by their lack of secondary structure, as assessed by far-UV (170-250 nm) circular dichroism (esp. a pronounced minimum at ~200 nm) or infrared spectroscopy.

Unfolded proteins have exposed backbone peptide groups exposed to solvent, so that they are readily cleaved by proteases, undergo rapid hydrogen-deuterium exchange and exhibit a small dispersion (<1 ppm) in their 1H amide chemical shifts as measured by NMR. (Folded proteins typically show dispersions as large as 5 ppm for the amide protons.)

The primary method to obtain information on disordered regions of a protein is NMR spectroscopy. The lack of electron density in X-ray crystallographic studies may also be a sign of disorder.

Intrinsically unstructured proteins have been implicated in a number of diseases. Aggregation of misfolded proteins is the cause of many synucleinopathies. The aggregation of the intrinsically unstructured protein α-Synuclein is thought to be responsible. The structural flexibility of this protein together with its susceptibility to modification in the cell leads to misfolded and aggregation.

Many key oncogenes have large intrinsically unstructured regions, for example p53 and BRCA1. These regions of the proteins are responsible for mediating many of their interactions.

Computational methods exploit the sequence signatures of disorder to predict whether a protein is disordered given its amino acid sequence. The table below, which was originally adapted from[9] and has been recently updated, shows the main features of software for disorder prediction. Note that different software use different definitions of disorder.

Since the methods above use different definitions of disorder and they were trained on different datasets, it is difficult to estimate their relative accuracy, but disorder prediction category is a part of biannual CASP experiment that is designed to test methods according accuracy in finding regions with missing 3D structure.