Datuk Seri Panglima Hishammuddin bin Tun Hussein (born 5 August 1961) is a Malaysian politician and member of the United Malays National Organisation (UMNO). He is the current Malaysian Minister of Home Affairs. He is the former Minister of Education, having served from 2004 to 2009. He has been mentioned as a likely successor to his cousin, the current Prime Minister Najib Razak.[1] He is the son of Malaysia's third prime minister, Tun Hussein Onn and the nephew of Malaysia's second prime minister, Tun Abdul Razak.

He graduated with a Bachelor of Laws (LL.B) from the University of Wales, Aberystwyth in 1984. He also attended London School of Economics and received a Master of Laws (LL.M) in Commercial and Corporate Law in 1988.

His wife, Yang Mulia Tengku Datin Seri Panglima Marsilla Tengku Abdullah, is a princess from the state of Pahang, Malaysia. 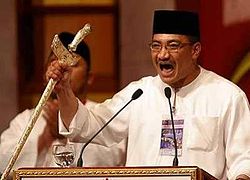 Hishammuddin's act of waving the keris (traditional Malay dagger) at the UMNO Annual General Meeting in 2005 drew applause from the UMNO delegates.

In 2005, Hishammuddin waved the keris at the UMNO Annual General Meeting. Commentators perceived this action as meant to defend the Malay Special Rights (Hak Keistimewaan Melayu) detailed in Article 153 of the Constitution of Malaysia and in the social contract. Although applauded by the Malay delegates, the picture of Hishammuddin waving the keris was widely ridiculed in the Malaysian blogosphere.

In response to concerns over the racial rhetoric, then Vice President Tan Sri Muhyiddin Yassin said that "Although some sides were a bit extreme [this year], it is quite normal to voice feelings during the assembly."[2]

The Deputy Chief of the Youth wing, Khairy Jamaluddin, insisted that "while there is nothing extraordinary about this year’s congress and that similar sentiments have been raised in the past, these feelings have never compromised the ultimate manifestation of governance in this country through BN’s power-sharing formula."[3]

Hishammuddin also defended the delegates' actions, saying that events earlier in the year related to the status of Islam in Malaysia and the NEP had "played on the Malay psyche. If they had not been allowed to release their feelings in a controlled channel, it could have been even worse." He defended his usage of the keris, saying it was meant "to motivate the Malays" and that it "is here to stay", denying that it was a symbol of Malay supremacy (ketuanan Melayu).[4]

Hishammuddin also asserted that "The keris is on the Umno flag...It is a symbol of Malay culture. You give keris as gifts to non-Malays, and non-Malays give them to me at functions."

However, Chinese politicians declared themselves unconvinced by Hishammuddin's explanations, with the Malaysian Chinese Association (a member of the ruling Barisan Nasional coalition) Youth chief, Datuk Seri Liow Tiong Lai, saying that "If I hold a Chinese sword at a wushu function, it would be different than if I hold one at a political event. This was a political function, so it is seen in a different context. It can create uneasiness."

Hishammuddin found himself mired in controversy again in 2009 when he came to the defence of a group of demonstrators who were protesting the relocation of a Hindu temple into their housing area. The protest was caught on video by the popular Malaysian news online portal Malaysiakini.[5] The protesters, with a group of about 50, marched a few hundred metres carrying the decapitated head of a cow. The cow is a sacred animal in the Hindu religion. The demonstration met with nation-wide condemnation from government & opposition politicians, non-governmental organisations, and the public.

In response the Malaysian Home Minister, invited the protesters to a discussion. In a press conference later, Hishammuddin defended the actions of the protesters saying that they cannot be blamed. He cited several reasons:[6]

The press conference which was also recorded by Malaysiakini, was almost as controversial as the protest; opposition politicians came out to denounce the Minister's actions and called for his resignation.

Embarrassingly for Hishamuddin, the Malaysian Communications and Multimedia Commission (MCMC), the government multimedia agency, sent a letter to Malaysiakini.com appealing for it to take down both videos. This has been interpreted by some as damage control by the government due to Hishammuddin's embarrassing press conference.[7]

Anwar Ibrahim is a CIA agent

In July 2010, he had, along with Information Minister Rais Yatim, accused Anwar Ibrahim of being a CIA agent based on a blog article.[8] However, Hishamuddin admitted the Home Ministry "doesn't know if Anwar is a tool (of the CIA) or not". This revelation was not based on any evidence, as he admitted, but on an article by an American blogger.[9] Mysteriously, he added that "action" would only be taken if "national security" was threatened although espionage, i.e. working for a foreign intelligence agency, is a crime.[10]

According to John Malott, a former US Ambassador in Malaysia from 1995 to 1998, this was not the first time UMNO made these accusations. In 2000, he had dealt with these allegations when the Malaysian government failed to prosecute Anwar. This time round it seems the government is unwilling to prosecute too. "Today, twelve years after I met with Abdullah (Badawi, who was then Foreign Minister), Malaysia still has not offered any proof that Anwar is an American agent - because it is NOT true," he wrote. Malott also accused the Malaysian government and various media of disseminating false news.[11]

Despite Hishamuddin admitting that they had no evidence to actually arrest Anwar, Rais pled to former UMNO members in PKR to rejoin the ailing Malay party.[12]