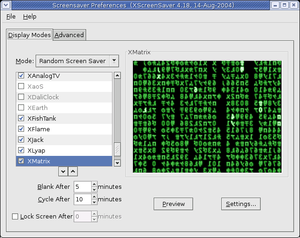 A screensaver named XMatrix in XScreenSaver representing the digital rain

Matrix digital rain, Matrix code or sometimes green rain, is the computer code featured in the Matrix series. The falling green code is a way of representing the activity of the virtual reality environment of the Matrix on screen. All three Matrix movies, as well as the spin-off The Animatrix episodes, open with the code. It is a characteristic mark of the franchise, as the opening crawl is for Star Wars.

In the film, the code that comprises the Matrix itself is frequently represented as downward-flowing green characters. This code includes mirror images of half-width kana characters and Latin letters and numerals. The effect resembles that of the older green screen displays, since the letters leave a fluorescent trace on the screen.

The 1995 cyberpunk film Ghost in the Shell, a strong influence on The Matrix,[1][2] features opening credits similar to the digital rain.

No official version of the code's typeface actually used in the Matrix trilogy and in the website for the game Path of Neo has been released. Several imitations have been made.

In the films, a few people can understand what happens inside the Matrix by looking at the code on computer monitors. Operators from Zion, unable to enter into the Matrix, concentrate on ways to read the scrolling code, or "rain", and infer data from it such as the location of a person in the City, possible exits, and so forth. As the character Cypher explains in the first film, the programming of the Matrix is so advanced that it is impractical to view it normally: it would take up multiple computer screens and take too long to read through. The complex "Matrix code" of raining green characters and pictograms allows the Matrix program to be concisely represented and thus read more easily. The character Neo is the only human that can see the code of which avatars are composed while in the Matrix, and is therefore able to see their "true" digital form. By contrast, some programs are not seen as part of the green code, but as golden code (e.g., Seraph).

Because of the popularity of the movies, the effect has become noted in itself and a part of pop culture. It has influenced other franchises and has been used in new-tech advertisements, TV spots, video-clips, posters and appeared in other high-tech topics, such as flash intros of cyberpunk related websites.