Frederick Charles Louis Constantine, Prince and Landgrave of Hesse (1 May 1868, Gut Panker – 28 May 1940, Kassel), Friedrich Karl Ludwig Konstantin Prinz und Landgraf von Hessen-Kassel in German, was the brother-in-law of the German Emperor William II and the elected King of Finland from 9 October to 14 December 1918.

Frederick was born at his family's manor, Gut Panker, in Plön, Holstein. He was the third son of Frederick William of Hesse, the then Landgrave of Hesse, and his wife Princess Anna of Prussia, daughter of Prince Charles of Prussia and Princess Marie Louise of Saxe-Weimar-Eisenach. The elder Frederick, a Danish military officer, had been one (and perhaps the foremost) of the candidates of Christian VIII of Denmark in the 1840s to succeed to the Danish throne if the latter's male line died out, but renounced his rights to the throne in 1851 in favor of his sister, Louise. The elder Frederick was of practically Danish upbringing, having lived all his life in Denmark, but in 1875, when the senior branch of Hesse-Kassel became extinct, he settled in northern Germany, where the House had substantial landholdings.

Eighteen days after his own birth, the baby Frederick's first cousin, the then Tsarevna Maria Fyodorovna of Russia, daughter of his aunt Queen Louise of Denmark, gave birth in Saint Petersburg to Nicholas II of Russia, who would become Frederick Charles' predecessor as the monarch of Finland (1894–1917).

Prince Frederick Charles and Princess Margaret of Prussia in 1893.

On 25 January 1893, Frederick married Princess Margaret of Prussia, the youngest daughter of the late Frederick III, German Emperor and Victoria, Princess Royal, eldest daughter of Queen Victoria of the United Kingdom and her consort Prince Albert of Saxe-Coburg and Gotha. They had six children, including two sets of twins:

Upon their father's death in 1884, Frederick's eldest brother Frederick William became the head of the House of Hesse, and afterwards his next brother Alexander. 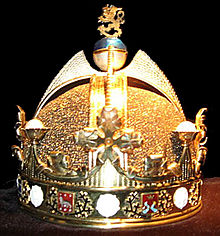 The crown planned for the King of Finland

Frederick Charles was elected as the King of Finland by the Parliament of Finland on 9 October 1918. However, with the end of World War I, in light of his German birth and the abdication of Emperor William II of Germany ending monarchies in Germany, the arrangement was quickly considered untenable by influential Finns of the time and by Frederick himself. Not much is known of the official stance of the victorious allies. Frederick Charles renounced the throne on 14 December 1918, without ever arriving in the country, much less taking up his position. Finland subsequently adopted a republican constitution.

Landgrave Alexander Frederick of Hesse abdicated as the head of the House of Hesse on 16 March 1925, and was succeeded by Frederick Charles, his younger brother.

At Frederick's death, his eldest surviving son, Philipp, succeeded him as head.

However, according to certain family documents and correspondence, his successor as King of Finland would have been his second surviving son Prince Wolfgang of Hesse (1896–1989), apparently because Wolfgang was with his parents in 1918 and ready to travel to Finland, where a wedding to a Finnish lady was already in preparation for the coming Crown Prince. Philipp was in the military and unable to be contacted at the time. This choice of the younger of these two twins at that time, however is no precedent that in next generations, the kingship would have been succeeded in secundogeniture, putting the eldest son always to the Hesse title (according to Dr. Vesa Vares). On the contrary, it is practically inconceivable that succession of a kingdom would depend on secondary consideration. the source Viini 2/2007 (in Finnish) indicates a view that Moritz of Hesse is the current successor, and prince Donatus is the heir.