Tower 42
For the tower in Birmingham, see 103 Colmore Row.

Tower 42 is the second tallest skyscraper in the City of London and the fifth tallest in London overall.[1] The original name was the National Westminster Tower, having been built to house the National Westminster Bank's International Division. Seen from above, the tower closely resembles the NatWest logo (three chevrons in a hexagonal arrangement). [2]

The building today is multi-tenanted and comprises Grade A office space and restaurant facilities.[3]

The construction cost was £72 million (approximately £230 million today).[6]. It is 183 metres (600 ft) high, which made it the tallest building in the UK until the topping out of One Canada Square in the Docklands in 1990. It held the status of tallest building in the City of London for 30 years, until it was surpassed by the Heron Tower in December 2009.

The National Westminster Tower's status as the first skyscraper in the City was a coup for NatWest, but was extremely controversial at the time, as it was a major departure from the previous restrictions on tall buildings in London. The original concept dates back to the early 1960s, predating the formation of the National Westminster Bank. The site was then the headquarters of the National Provincial Bank, with offices in Old Broad Street backing onto its flagship branch at 15 Bishopsgate.

Early designs envisaged a tower of 137 m (450 ft); this developed into a design with a 197 m (647 ft) tower as its centrepiece, proposed in 1964 by architect Colonel Richard Seifert. The plan attracted opposition, partly because of the unprecedented height of the design and partly because of the proposed demolition of the 19th century bank building at 15 Bishopsgate, which dated from 1865 and was designed by architect John Gibson. Seifert, who had developed a reputation for overcoming planning objections, organised an exhibition in which he presented two alternative visions: his preferred design, and a second design featuring a 500 ft tower with an unattractive squat second tower alongside. Visitors were invited to vote and overwhelmingly chose the single tower design.[7] The final design preserved the Gibson banking hall and the tower's height was reduced to 183 m (600 ft). 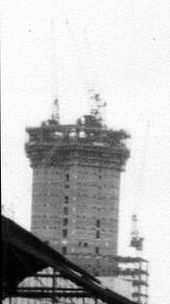 The building under construction in 1972

Demolition of the site commenced in 1970 and the tower was completed in 1980. The building is constructed around a huge concrete core from which the floors are cantilevered, giving it great strength but significantly limiting the amount of office space available.

In total, there are 47 levels above ground, of which 42 are cantilevered. The lowest cantilevered floor is designated Level 1, but is in fact the fourth level above ground. The cantilevered floors are designed as three segments, or leaves, which approximately correspond to the three chevrons of the NatWest logo when viewed in plan. The two lowest cantilevered levels (1 and 2) are formed of a single "leaf"; and the next two (3 and 4) are formed of two leaves. This pattern is repeated at the top, so that only levels 5 to 38 extend around the whole of the building.

The limitations of the design were immediately apparent - even though the building opened six years before the Big Bang, when there was a lesser requirement for large trading floors, the bank decided not to locate its foreign exchange and money market trading operation ("World Money Centre") into the tower. This unit remained in its existing location at 53 Threadneedle Street. Other international banking units, such as International Westminster Bank's London Branch and the Nostro Reconciliations Department remained at their locations (at 41 Threadneedle Street and Park House, Finsbury Square, respectively) due to insufficient space in the tower.

Innovative features in the design included double-decked elevators, which provide an express service between the ground/mezzanine levels and the sky lobbies at levels 23 and 24. Both the concept of double decked elevators and sky lobbies were new to the UK at the time. Other innovative features included an internal automated "mail train" used for mail deliveries and document distribution; an automated external window washing system; and computer controlled air conditioning. The tower also had its own telephone exchange installed in one of the basement levels – this area was fitted with panoramic photographs of the London skyline, creating the illusion of being above ground.[8]

Fire suppression design features included pressurised stairwells, smoke venting and fire retardant floor barriers. However, at the time of design, fire sprinkler systems were not mandatory in the UK and so were not installed.[9] It was this omission, coupled with an onsite fire at the tower during the 1996 refurbishment, that prompted the Greater London Council to amend its fire regulations and require sprinkler installations at all buildings.[10]

The cantilever is constructed to take advantage of the air rights granted to it and the neighbouring site whilst respecting the banking hall on that adjacent site, as only one building was allowed to be developed. For a time it was the tallest cantilever in the world. 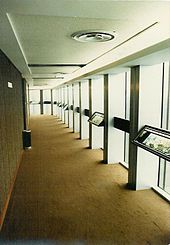 The National Westminster Tower's viewing gallery at Level 42, as seen in 1981. This area is now in use as a commercial champagne bar

The full floor configuration was as follows:

In 1993, NatWest had planned a major premises relocation that would have seen the International Banking Division move from the tower and be replaced with its Domestic Banking Division, enabling the bank to terminate its lease of the Drapers Gardens tower. These plans had to be abandoned after the tower was damaged in the April 1993 Bishopsgate bombing, a Provisional Irish Republican Army truck bombing in the Bishopsgate area of the City of London. The bomb killed one person and extensively damaged the tower and many other buildings in the vicinity, causing over £1 billion worth of damage.[11] The tower suffered severe damage and had to be entirely reclad and internally refurbished. (Demolition was considered, but would have been too difficult and expensive.)[12] The external re-clad was carried out by Alternative Access Logistics with the use of a multi-deck space frame system to access three floors at once with the ability to move up and down the whole building.[13] On 17 January 1996, during the repairs and possibly from the welding being undertaken, a fire started at the top of the building.[14] 500 workmen were evacuated and smoke was clearly seen coming out of the top of the building.[14] A helicopter using thermal imaging equipment pinpointed the source of the fire, which was on the 45th floor in a glass fibre cooling tower..[14] After refurbishment, NatWest decided not to re-occupy and renamed the building the International Financial Centre, then sold it. 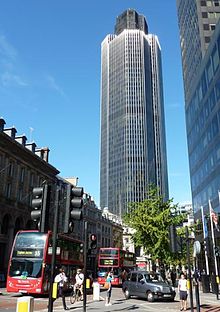 View of Tower 42 from Bishopsgate's junction with Leadenhall Street

The new owners, UK property company Greycoat, renamed it Tower 42, in reference to its 42 cantilevered floors. It is now a general-purpose office building occupied by a variety of companies,[15] including:

In April 2010 the current owners, Hermes Real Estate and BlackRock's UK property fund, were seeking buyers for the tower at an expected price of £300 million. This would potentially be the largest single commercial property sale in the City of London in 2010.[24] In July 2010 it was reported that Chinese Estates Group had entered exclusive discussions to buy Tower 42.[25]

Tower 42 was the tallest building in London and the United Kingdom for 10 years. At its completion in 1980, it claimed this title from the 175 m (574 ft) BT Tower, a transmission tower located at 60 Cleveland Street in Fitzrovia, London.

Tower 42 is now the second tallest tower in the City of London, having been overtaken in 2009 by the 230m Heron Tower and the fifth tallest in London overall.[26] The 288m Bishopsgate Tower and the 225m Leadenhall Building are both under construction nearby.

Previous buildings on the site 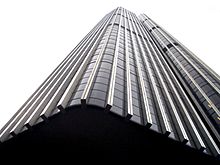 Tower 42 viewed from directly below 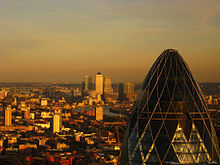