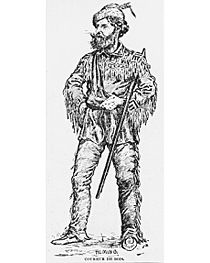 A coureur des bois was an adventurer with many skills, including those of businessman, and of an expert canoeist.[1] They engaged in a range of activities; the term is most strongly associated with those who engaged in the fur trade in ways that were considered to be outside of the mainstream. Early in the fur trade era this meant circumventing the normal channels by going deeper into the wilderness to trade.[2] Later it involved trading without permission from the French authorities during the late 17th century and early 18th century when such permission was required.

Although the term is most strongly associated with those who engaged in the fur trade, the most prominent coureurs des bois generally gained their reputation for being explorers rather than for being fur traders.

Native peoples were essential to the fur trade because they traded for and brought furs from the interior regions of French, British, and later, American territories in North America to French trading posts. During times of hostilities, it was safer for French traders to have their Native allies hunt and trap for furs, but more money could be made by those who were willing to venture into the interior rivers and lakes and bring back beaver pelts and other furs themselves. During peaceful times, many young men in New France were attracted to the high profits and adventure of the trade. They were entrepreneurs, working for themselves rather than representing a company, and became known as coureurs de bois, or "woodland runners". By 1680, approximately 500 coureurs de bois were working in the Lake Superior region attempting to outdistance the middlemen.[3]

During the 17th century, the fur trade was very lucrative for New France. Competition was fierce, and many colonists risked the journey west and north through hostile Iroquois territory from the settlements around Montreal to the pays d'en haut, or "upper country" (the area around the Great Lakes) to trade with Native trappers. These coureurs des bois were not looked upon favorably by Montreal authorities or royal officials. They disapproved of settlers leaving the developing agricultural areas to seek their fortune trading. French authorities preferred that the transportation of furs be handled by the natives (and later the Voyageurs) than have independent unregulated traders. The unregulated traffic in furs also undermined Montreal's role as the focal point for the fur trade — where traders would exchange beaver pelts for trade goods such as clothing, muskets and copper pots. Some illicit traders also caused problems by trading alcohol for furs. 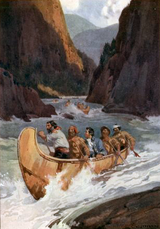 "The Descent of the Fraser River, 1808", from a colour drawing by C. W. Jefferys

By 1681, the French authorities realized the traders had to be controlled so that the industry might remain profitable. They therefore legitimized and limited the amount of fur trading by establishing a system that used permits (congés). At the same time the fur trade also moved further into the continent, favoring organized long distance transportation of furs and trading goods.

The combination of these factors helped create a new player in the fur trade business, the voyageur, which literally means "traveler". Voyageurs typically worked for or were allied with a Montreal merchant who held a permit.

The fur trade was thus controlled by a small number of Montreal merchants. New France also began a policy of expansion in an attempt to dominate the trade. French influence extended west, north and south. Forts and trading posts were built with the help of explorers and traders. Treaties were negotiated with native groups, and fur trading became very profitable and organized. The system became complex and efficient; to a certain extent, entrepreneurs were replaced by hired laborers. 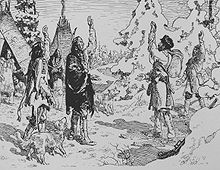 Arrival of Radisson in an Indian camp in 1660.