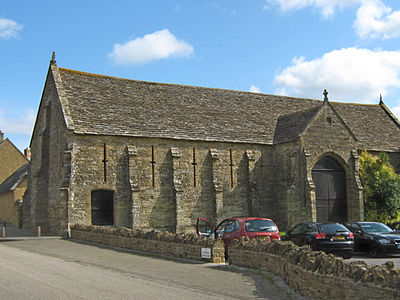 A monastic grange was a manor or other centre of an outlying farming estate belonging to a monastery and used for food production in Great Britain, Ireland, or Austria. In France such a supporting satellite farm, often a replica on a reduced scale of the mother house, was a doyenné,[1] which is to say, a "deanery" under the local guidance of a dean. In English contexts grange is often specifically used to refer to the manor house surrounded by its farm-buildings.[2]

Granges, like other manors, were landed estates used for food production, centred around a manor house with its out-buildings and possibly including other facilities such as a mill or a tithe barn, for grange comes through French graunge from Latin granica, "granary".[3] The granges were particularly important to urban-based monasteries and might be located at some distance. They could farm livestock or produce crops. Specialist crops might include apples, hops or grapes to make beverages or herbs for the infirmary. Many granges included fish-ponds to supply Friday meals to the monastery. The produce could both sustain the monks and be sold for profit. Favoured manor houses might be used as country retreats by the abbot. Granges are often mistakenly referred to as monasteries. However, whilst under overall monastic control, many would rarely see a monk and were run on a day-to-day basis by a steward and worked by local farm labourers or perhaps lay brothers.

At the Dissolution of the Monasteries, all monastic manors were seized by King Henry VIII. They were sold off or given away to the nobility and landed gentry. Granges often retained their 'grange' names and many can still be found in the British landscape today. The word has also become popular in modern times in the naming of smaller country houses.

Though initially just a description of the area of land used for food production, in Ireland, the word 'Grange' often evolved into the name of the townland or parish, replacing an earlier name. Most Irish counties have a place called 'Grange'; some have a number.

In the 11th century, St. Mary's Abbey, Trim, County Meath was supplied with food by a number of granges, including one located at Killenagolach, near the ancient bishopric of Ardbraccan (modern day 'Bohermeen'), five miles from the town. Eventually 'Grange' replaced Killenagolach as name of the local townland and parish, and has remained the name of the area ever since.

Austria is home to several large-scale granges built by the Cistercian order in the twelfth and thirteenth centuries.

One of the oldest wine estates in Central Europe, the Lilienfelderhof (Lilienfelder Hof) in Pfaffstätten, 30 km south of Vienna, Austria, traces its history to an endowment made by the Babenberger Leopold VI, Duke of Austria (“the Glorious”) to the Cistercian monks at Lilienfeld Abbey in 1202, though the property as such (as opposed to the endowment) is traditionally dated to 1209. In 2006 the Lilienfelder Hof was acquired by the Kartause Gaming Private Foundation, led by Architect Walter Hildebrand, on the basis of a 99-year leasehold (Baurecht). The foundation is currently in the process of restoring and revitalising both the numerous buildings and 20 hectares (ca. 50 acres) of vineyards.

The Thallern estate in Gumpoldskirchen, another Cistercian grange, owned by Heiligenkreuz Abbey, dates from 1147.