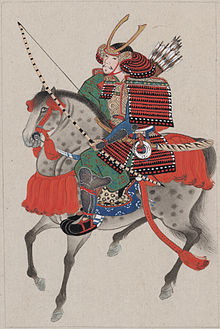 A samurai on horseback wearing (O-yoroi)

Armour in Japan has a history that goes back as far as the 4th century.[1] Japanese armour developed enormously over the centuries since its introduction to the battlefield. It was worn to varying degrees by numerous classes; most notably by the Samurai (and by default the ashigaru), and was seen on the battlefield both on mounted and foot troops. The pinnacle of Japanese lamellar armour is generally accepted as being the O-Yoroi (大鎧) (literally 'great armour') type. 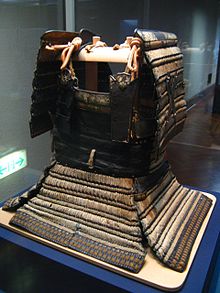 Japanese armour is thought to have evolved from the armour used in ancient China and Korea.[2] Cuirasses and helmets were manufactured in Japan as early as the 4th century.[3]Tankō, worn by foot soldiers and keikō, worn by horsemen were both pre-samurai types of early Japanese cuirass constructed from iron plates connected together by leather thongs.

During the Heian period 794 to 1185 the Japanese cuirass evolved into the more familiar style of armour worn by the samurai known as the dou or dō. Japanese armour makers started to use leather (nerigawa) and lacquer was used to weather proof the armor parts. By the end of the Heian period the Japanese cuirass had arrived at the shape recognized as being distinctly samurai. Leather and or iron scales were used to construct samurai armours, with leather and eventually silk lace used to connect the individual scales (kozane) which these cuirasses were now being made from.[4]

In the 16th century Japan began trading with Europe during what would become known as the Nanban trade. Samurai acquired European armour including the cuirass and comb morion which they modified and combined with domestic armour as it provided better protection from the newly-introduced matchlock muskets known as Tanegashima. The introduction of the tanegashima by the Portuguese in 1543[5]changed the nature of warfare in Japan causing the Japanese armour makers to change the design of their armours from the centuries old lamellar armours to plate armour constructed from iron and steel plates which was called tosei gusoku (new armours).[6]Bullet resistant armours were developed called tameshi gusoku or (bullet tested)[7]allowing samurai to continue wearing their armour despite the use of firearms.

The era of warfare called the Sengoku period ended around 1600, Japan was united and entered the peaceful Edo period, samurai continued to use both plate and lamellar armour as a symbol of their status but traditional armours were no longer necessary for battles. During the Edo period light weight, portable and secret hidden armours became popular as there was still a need for personal protection. Civil strife, duels, assassinations, peasant revolts required the use of armours such as the kusari katabira (chain armour jacket) and armoured sleeves as well as other types of armour which could be worn under ordinary clothing.[8]Edo period samurai were in charge of internal security and would wear various types of kusari gusoku (chain armour) and shin and arm protection as well as forehead protectors (hachi-gane).[9]

Armour continued to be worn and used in Japan until the end of the samurai era (Meiji period) in the 1860s, with the last use of samurai armour happening in 1877 during the satsuma rebellion.[10] 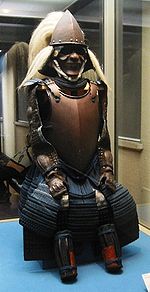 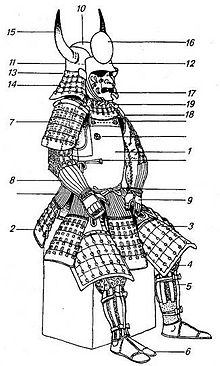 Japanese armour was generally constructed from many small iron (tetsu) and or leather (nerigawa) scales (kozane) and or plates (ita-mono), connected to each other by rivets and lace (odoshi) made from leather and or silk, and or chain armour kusari. These armor plates were usually attached to a cloth or leather backing. Japanese armour was designed to be as lightweight as possible as the samurai had many tasks including riding a horse and archery in addition to swordsmanship. The armour was usually brightly lacquered to protect against the harsh Japanese climate. Chain armour (kusari) was also used to construct individual armour pieces and full suits of kusari were even used. [11]

A full suit of traditional Samurai armour could include the following items:

Tosei dou (dō) gusoku the so called "modern armours" made from iron plates (ita-mono)[14] instead of individual scales (kozane). Tosei-gusoku became prominent starting in the 1500s due to the advent of fire arms, new fighting tactics and the need for additional protection.[15][16]