Nazi relations with the Arab world

Nazi relations with the Arab world

During the era of Nazi Germany (1933–1945), the relationship between the Nazi movement and leadership and the Arab world encompassed contempt, propaganda, collaboration and in some instances emulation.

Nazi perspective towards the Arabs

Despite the cooperation and association of some Arabs with the Nazis, Adolf Hitler and the Nazis considered the Arabs to be an inferior race.

The "Nazis viewed the Arabs with contempt. Arabs in Germany received the discriminatory treatment consistent with Nazi racial theories." [1][2]

Historian Bernard Lewis explained that the Arabs, in Nazi Germany's classification, shared the inferiority ascribed by Nazi ideology to the Jews, references to their inferiority were expressed from time to time, such as slurs – in a August 1939 speech by Hitler – on the peoples of the Middle East, among other non-Europeans, as "painted half-apes, who want to feel the whip."[3] Hitler's description of Arabs as "half apes." has been well publicized.[1][2][4][5][6]

As the Führer had racist objections to Arabs, he declined to shake the Mufti's hand (in their 1941 meeting) and refused to drink coffee with him. [7]

Arab reception of Hitler and Nazis 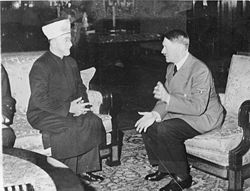 Massive programs of propaganda were launched in the Arab world, first by Fascist Italy and later on by Nazi Germany. The Nazis in particular focused in impacting on the new generation of political thinkers and activists. [8]

Adolf Hitler was celebrated in large parts of the Arab world, and some newspapers even likened him to the Prophet. Rommel was almost as popular as Hitler. Arabs Shouting of "Heil Rommel" was a common greeting in Arab countries. After France's defeat to Nazi Germany in 1940, Arabs were chanting against the French and British around the streets of Damascus: "No more Monsieur, no more Mister, Allah's in Heaven and Hitler's on earth."[7] Posters with Arabic sayings: “In heaven God is your ruler, on earth Hitler." were frequently displayed in shops in the towns of Syria.[citation needed]

"Hitler himself was Islamicized on the radio and by word of mouth as Abu Ali, and in Egypt he was deemed as Muhammad Haidar. As such, he was prayed for in every village," say historians.[9][10]

The founder of the Baath wrote in his memoirs about Fascism and Nazi ideology among some important founders of the Baath, that when it was still called the National Arab Party (1939–40) and led mainly by Zaki al-Arsuzi, Arsuzi believed in the "racial purity and nobility of the Arabs."[11] He wrote: "We were racists. We admired the Nazis. We were immersed in reading Nazi literature and books that were the source of the Nazi spirit...We were the first who thought of a translation of Mein Kampf. Anyone who lived in Damascus at that time was witness to the Arab inclination toward Nazism."[12][13][14]

Gamal Abdel Nasser (who would become Egypt's second president in 1956) recorded his sympathy and his disappointment at Germany's defeat. Rashid Ali al-Gaylani was resuscitated as a hero in Saddam Hussein's Iraq.[15]

Among the Arab leadership to have worked with the Nazis and aiding them, the two most noted were: Haj Amin Al-Husseini[16] the ex-Mufti, the spiritual leader of British Mandate Palestine, notoriously anti-Jewish,[17][18] and the Iraqi prime minister Rashid Ali al-Gaylani.[19][20]

The ex-Mufti had agents in Kingdom of Iraq, Syria and in Mandate Palestine. On November 28, 1941, he met with Hitler.[citation needed] In 1941 the Mufti orchestrated a coup d'état, with Nazi support and financing, led by Rashid Ali al-Gaylani.[10]

Anwar Sadat, who later became president of Egypt, was a willing co-operator in Nazi Germany's espionage according to his own memoirs.[15]

The 1941 Mufti-inspired Farhud pogrom against the Jews of Baghdad by pro-Nazi Arabs, which resulted in the death of 140 Jews and the injury of 700 more,[21] was led by the Hitler youth-modeled[22] Iraqi-Arab Futuwwa paramilitary group under pro-Nazi Iraqi minister of education Saib Shawkat who praised Hitler for eradicating Jews.[23]

The Holocaust in North Africa

On January 20, 1942, 15 high-ranking Nazi Party and German government officials met at a villa in Wannsee, a Berlin suburb, to coordinate the execution of the "Final Solution” of the Jewish Question (Endlösung). In the Wannsee document, the word “Europe” included France’s three overseas Arab colonies of Morocco, Algeria and Tunisia, as per the term “unoccupied France.”

At the Wannsee Conference, Reinhard Heydrich, Heinrich Himmler’s deputy and head of the Reichssicherheitshauptamt (Reich Security Main Office, or RSHA), noted the numbers of Jews to be murdered, and officially listed the figure of 700,000 Jews for "France/unoccupied territory”, including by that the Jews in unoccupied France’s North Africa possessions, Morocco, Algeria and Tunisia.

Sir Martin Gilbert, well-known historian and Holocaust scholar, makes the case in his Atlas of the Holocaust that “It was not only in Europe, but also in North Africa that Jews were at risk” (page 137). On page 85, in map 99 “Jews Marked Out for Death, 20 January 1942,” Gilbert specifies, “France Unoccupied Zone: 700,000 including French North Africa.” In his book The Holocaust: A Jewish Tragedy (published in the United States as The Holocaust: A History of the Jews of Europe during the Second World War), Gilbert explains that “…700,000, a figure which included the Sephardi Jews in France’s North African possessions, Morocco, Algeria and Tunisia… (page 282).”

Robert Satloff, in his book, “Among the Righteous: Lost Stories from the Holocaust’s Long Reach into Arab Lands” (New York: Public Affairs, 2006. pp. 18–19) firmly agrees with Gilbert’s statements, writing that “evidence of German ambition to target the Jews of these Arab lands can be found in the country-by-country plan for the extermination of Jews approved by Nazi leaders who gathered at the infamous Wannsee Conference in Berlin in January 1942. … The hugely inflated Wannsee number for the Jews of unoccupied France was no mistake, because it included the hundreds of thousands of Jews who lived in France’s North African possessions: the colony of Algeria and the two protectorates … of Morocco … and … Tunisia”

Thus, the SS had established a special unit in 1942 to "to Kill Jews in North Africa." It was led by SS Obersturmbannführer, Walter Rauff, an experienced mass murderer who helped develop the mobile gassing vehicles the Germans used to murder Jewish people in Europe. The unit also established a network of labor camps in Tunisia where over 2,500 Tunisian Jews perished during a six months Nazi rule, the Tunisian Arabs' army was also involved in executions.[7][24]

The Mufti Haj Amin Al-Husseini led[citation needed] Muslim SS units[17] carrying out Nazis' atrocities in the Balkans. The three divisions of Muslim ("holy warriors" [25]) SS soldiers involved in the region included: The Waffen SS 13th Handschar "Knife", the 23rd Kama "Dagger" and the 21st Skenderbeg, Although it is not often mentioned, particularly in the growing tide of western anti-islamism, but local clerics actually discouraged Bosnian Muslims from joining these SS units. They were acting against Christians and against Jews.[26]

Arab incorporation and emulation of fascism

The 1930 saw many movements in the Arab world emerging in fascist and Nazi forms. The Young Egypt Party ("Green shirts") most resembled Hitler youth and was "obviously Nazi in form" according to historian Bernard Lewis.[3] The Syrian Social Nationalist Party (SSNP), one of the most prominent right-wing Syrian political parties, adopted the styles of fascism: its emblem, the red hurricane, was taken from the Nazi swastika,[27] leader Anton Saada was known as al-za'im (the Führer), and the party anthem was "Syria, Syria, fiber alles" sung to the same tune as the German national anthem.[28][29] He founded the fascist SSNP with a program that Syrians were "a distinctive and naturally superior race."[9]

In August 2010, Iman Al-Quwaifli, a liberal Saudi columnist condemned in Al-Watan the 'phenomenon of sympathy for Adolf Hitler and for Nazism in the Arab world.' She asserted that sympathy for Hitler takes two forms: popular admiration for his leadership and pseudo-intellectual sympathy.[30] She cited as an example of admiration for Hitler in contemporary Arabia the justification by Islamic cleric Hussam Fawzi Jabar of Hitler's actions against the Jews in an Egyptian talk show, aired 2010.[30]

Throughout history, Allah has imposed upon the Jews people who would punish them for their corruption...The last punishment was carried out by [Adolf] Hitler. By means of all the things he did to them – even though they exaggerated this issue – he managed to put them in their place. This was divine punishment for them...Allah willing, the next time will be at the hand of the believers.

Scholars such as Robert Wistrich and Bernard Lewis have proposed the existence of ideological similarities between Islamic fundamentalism and Nazism, specifically a shared anti-Semitism. [39]