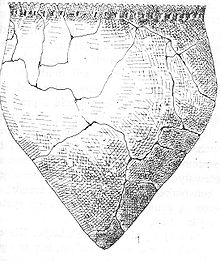 Pottery of the Narva culture

Narva culture or eastern Baltic (ca. 5300 to 1750 BC)[1] was a European Neolithic archaeological culture found in present-day Estonia, Latvia, Lithuania, Kaliningrad Oblast (former East Prussia), and adjacent portions of Poland and Russia. A successor of the Mesolithic Kunda culture, Narva culture continued up to the start of the Bronze Age. The technology was that of hunter-gatherers. The culture was named after the Narva River in Estonia.

The people of the Narva culture had little access to flint; therefore, they were forced to trade and conserve their flint resources.[2] For example, there were very few flint arrowheads and flint was often reused. The Narva culture relied on local materials (bone, horn, schist). As evidence of trade, researchers found pieces of pink flint from Valdai Hills and plenty of typical Narva pottery in the territory of the Neman culture while no objects from the Neman culture were found in Narva.[2] Heavy use of bones and horns is one of the main characteristics of the Narva culture. The bone tools, continued from the predecessor Kunda culture, provide the best evidence of continuity of the Narva culture throughout the Neolithic period. The people were buried on their backs with few grave goods.[2] The Narva culture also used and traded amber; a few hundred items were found in Juodkrantė. One of the most famous artifacts is a ceremonial cane carved of horn as a head of female elk found in Šventoji.[3]

The people were primarily fishers, hunters, and gatherers. They slowly began adopting husbandry in middle Neolithic. They were not nomadic and lived in same settlements for long periods as evidenced by abundant pottery, middens, and structures built in lakes and rivers to help fishing.[2] The pottery shared similarities with Comb Ceramic culture, but had specific characteristics. One of the most persistent features was mixing clay with other organic matter, most often crushed snail shells.[2] The pottery was made of 6-to-9 cm (2.4-to-3.5 in) wide clay strips with minimal decorations around the rim. The vessels were wide and large; the height and the width were often the same. The bottoms were pointed or rounded, and only the latest examples have narrow flat bottoms. From mid-Neolithic Narva pottery was influenced and eventually disappeared into the Corded Ware culture.[2]

For a long time archaeologists believed that the first inhabitants of the region were Finno-Ugric, who were pushed north by people of the Corded Ware culture.[4] In 1931, Latvian archeologist Eduards Šturms was the first to note that artifacts found near Zebrus Lake in Latvia were different and possibly belonged to a separate archaeological culture. In early 1950s settlements on the Narva River were excavated. Lembit Jaanits and Nina Gurina grouped the findings with similar artifacts from eastern Baltic region and described the Narva culture.[4]

At first it was believed that Narva culture ended with appearance of the Corded Ware culture. However, newer research extended it up to the Bronze Age.[4] As Narva culture spanned several millenniums and encompassed a large territory, archaeologists attempted to subdivide the culture into regions or periods. For example, in Lithuania two regions are distinguished: southern (under influence of the Neman culture) and western (with major settlements found in Šventoji).[5] There is an academic debate what ethnicity represented the Narva culture: Finno-Ugrians or Europids, preceding arrival of the Indo-Europeans.[6] It is also unclear how the Narva culture fits with the arrival of the Indo-Europeans (Corded Ware and Globular Amphora cultures) and formation of the Baltic tribes.[7]