The New York City 2012 Olympic bid was one of the five short-listed bids for the 2012 Summer Olympics, ultimately won by London 2012.

New York City's Olympic Bid, run by the private non-profit organization NYC2012, was founded by Daniel L. Doctoroff, who was managing director of a successful private equity firm. As the legend goes, Doctoroff thought of bringing the Olympic Games to New York after witnessing New York's international sports fans at a 1994 FIFA World Cup match in Giants Stadium. Single-handedly, he built a team to help him craft a plan for staging the Games. Seven years after he founded the bid, Doctoroff resigned as President of NYC2012 to join the administration of Mayor Michael Bloomberg. He continued to lead New York's Olympic Bid as Deputy Mayor for Economic Development and Rebuilding.

Two of the biggest projects proposed as part of the bid were the revival of the East River waterfront, including the construction of an Olympic Village across the river from the United Nations and an aquatics center in Brooklyn, and the construction of West Side Stadium, which was supposed to have led to the comprehensive redevelopment of the Far West Side of Manhattan. Other projects that were part of the bid included a rowing course in Queens, a velodrome in the South Bronx, a marina along the coast of the Atlantic Ocean, an equestrian center on Staten Island, and the refurbishment of a historic armory in Harlem.

Their bid may have been hampered by the fact that the 2010 Winter Olympics are being held in Vancouver and organizers are believed to be eager to avoid having consecutive Olympics on the same continent. However Albertville (1992), Barcelona (1992), Lillehammer (1994), Athens (2004) and Torino (2006) have held the Olympics consecutively on the same continent. Additionally, the Olympics have been held in the United States as recently as 2002 (Winter Olympics), 1996, 1984, and 1980 (Winter Olympics), making the US the first country to hold four games within a 25-year period. However, of the five candidates, only New York and Madrid have never hosted the Games before.

The Village was going to be located at the East River Waterfront of Queens across the United Nations Headquarters. During the Olympics and Paralympics, would have housed more than 16,000 athletes and coaches. Costing an estimate of $1.5 billion dollars, the Village would include plazas and shoppes, restaurants, acres of green landscape, training centers and fields, a private dining hall, religious centers, and ferry and train service. Post-Olympic plans would provide world-class residential housing for up to 18,000 New York residents. The area would have designed by Morphosis Architects as the heart and crossroad of New York's Olympic X Plan.

The West Side Stadium 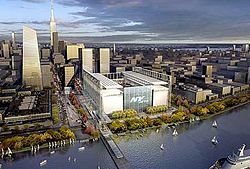 An Olympic Stadium on the West Side of Manhattan had been part of NYC2012's plan since 2000, when the organization's blueprint for the Games was formally unveiled to the public. Host to Opening and Closing Ceremonies and Athletics competitions, the West Side Stadium would have sat adjacent to the Jacob Javits Convention Center, host to six Olympic sports, Olympic Square Park, and a new 40+ story office tower that would have housed Olympic broadcasters in 2012.

The Stadium's construction was scheduled to proceed regardless of whether New York was awarded the 2012 Olympic Games. The project was to be paid for by the New York Jets ($800 million), New York City ($300 million for infrastructure), and New York State ($300 million for the retractable roof). According to the project's promoters, the building's retractable roof, unnecessary for football, would make the stadium a flexible, multi-purpose facility. It would provide a long-term boost to New York's economy and would jump-start the development of Manhattan's Far West Side.

Local civic groups concerned with congestion and a changing neighborhood had long opposed its construction, and it historically had low city-wide approval ratings. The project managed to stay largely out of the media and public spotlight until early 2004 when Cablevision released its first round of advertising against the Stadium. As the owner of Madison Square Garden, which is located just a few blocks from the site of the proposed Olympic Stadium, Cablevision saw the new facility as a potential threat to the Garden's share of concert, convention, and other major event business.

The Mayor's political opponents, notably the contenders for the Democratic mayoral nomination, used the Stadium issue as a symbol that Mayor Bloomberg was a billionaire who was out of touch with the needs of average New Yorkers. Cablevision spent over $30 million on negative advertising and political lobbying and even generated a competing proposal for development of the Stadium site.

However, the Stadium was strongly supported by New York Mayor Michael Bloomberg, who insisted that there was no alternate site for the Olympic Stadium and the project needed to be approved before the International Olympic Committee selected the Host City on July 6, 2005.

Finally, on June 6, 2005, an obscure State government board, the Public Authorities Control Board, rejected New York State's $300 million contribution for the project, eliminating the possibility that an Olympic Stadium on that site would be fully approved before the IOC's vote.

The City, working with NYC2012, quickly developed a backup plan. The new plan called for a new ballpark for the New York Mets in Queens in the parking lot of Shea Stadium, later conceived to be Citi Field, to be completed for the 2009 baseball season; it was announced on June 12, 2005. The plan would be to use the stadium for the 2012 Olympics while the Mets would play at Yankee Stadium in The Bronx for the 2012 season.

Possibly the largest legacy of NYC2012 has been large-scale development of areas of New York City that underwent rezoning in order to move forward with the NYC2012 bid. Manhattan's Far West Side and Brooklyn's waterfront in Williamsburg and Greenpoint both underwent rezoning revisions which were in part due to the region's planned roles as Olympic venues, including the controversial West Side Stadium.[1] The development of the once industrial Queens West neighborhood on the East River may also have origins in the bid, as it was initially slated for development as the planned site of the Olympic Village. Following the Games, the site was to be bought by private developers and converted into condominiums.[2]