The most well-recognized NEC Player of the Year is Marist's Rik Smits, who won the award in 1987 and 1988. Smits went on to have a successful National Basketball Association (NBA) career for 12 seasons (1988–2000), all with the Indiana Pacers.[1] In 1998, Smits was named an Eastern Conference All-Star.[1]

Central Connecticut State, Long Island and Robert Morris have the most all-time winners with five each. All charter members of the Northeast Conference that are still members have had at least one winner. Of current NEC members, only Bryant and Sacred Heart have had zero players of the year. 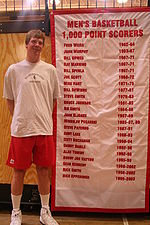 Rik Smits of Marist went on to have a successful NBA career with the Indiana Pacers.