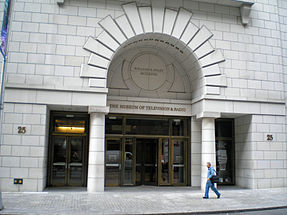 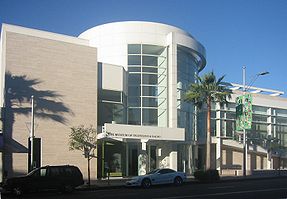 The Paley Center for Media, formerly The Museum of Television & Radio (MT&R) and The Museum of Broadcasting, founded in 1975 by William S. Paley, is an American cultural institution dedicated to the discussion of the cultural, creative and social significance of television, radio and emerging platforms for the professional community and media-interested public.

It was renamed The Paley Center for Media on June 5, 2007 to encompass emerging broadcasting technologies such as the Internet, mobile video and podcasting, as well as to expand its role as a neutral setting where media professionals can engage in discussion and debate about the evolving media landscape.[1]

With an ever-growing collection of content broadcast on radio and television, the Paley Center has two branches; in New York City and Los Angeles. The New York City branch is in the heart of Midtown Manhattan at 25 West 52nd Street between 5th and 6th Avenues. The Los Angeles branch is located at 465 Beverly Drive in Beverly Hills, near Rodeo Drive.

Some television programs are from the 1940s with radio programs dating back to the 1920s. The earliest TV program in the Museum's collection is a silent film of NBC's 1939 production of Dion Boucicault's melodrama The Streets of New York (1857), with Norman Lloyd, George Coulouris and Jennifer Jones.[2]

The museum does not sell the material or permit it to leave the premises. Viewing copies of television programs are Hi-8mm video tape dubs. The originals are kept in a vault outside of New York City, and the collection is being digitized.[3] The Paley Center has acquired many lost episodes of classic television shows and has produced documentary features about the history and impact of television and radio. In recent years, the Center has sponsored advance viewing of the pilot episodes of each network's new programs. 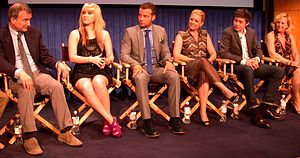 Seminars and interviews with industry luminaries are conducted frequently, all of which are recorded and available for later viewing on individual consoles. Past seminar participants have included Lucille Ball, Carol Burnett, Dick Cavett, Alan Alda, Al Franken, John Frankenheimer, James Garner, Bob Hope, Roy Huggins, Jack Paar, Dennis Potter, Dick Van Dyke, and Gore Vidal. Also available for viewing are seminars featuring creators and cast members from TV shows, including The Larry Sanders Show, Seinfeld, King of the Hill, The Simpsons, South Park, The Daily Show with Jon Stewart, Arrested Development, House and Battlestar Galactica. Panel discussions have varied from what it was like to work with Orson Welles to a celebration of Roy Huggins's career.

The original Museum of Broadcasting, founded in 1975 by William S. Paley, opened in Manhattan on November 9, 1976, occupying two floors in an office building at 1 East 53 Street, near the corner of 53rd Street and Fifth Avenue. This was adjacent to the Doubleday Book Store on Fifth Avenue and next to a subway entrance used for living quarters by homeless people during the 1980s.

The Museum of Broadcasting's name was changed to The Museum of Television & Radio with the September 12, 1991 move into the William S. Paley Building. Designed by Philip Johnson and located at 25 West 52nd Street (adjacent to the famed 21 Club at 21 West 52nd Street), the 16-story building was itself renamed The Paley Center for Media in 2007. It has two front entrances: the one on the left is for office staff, and the main entrance on the right for the general public. The Alexander Mackendrick film Sweet Smell of Success (1957) has an exterior location scene with different angles revealing how the neighborhood looked in the years before the building was constructed.

The ground-level floor of the New York museum features the ticket and information area, a combination bookstore/gift shop and the Steven Spielberg Gallery, used for exhibitions, receptions and fund-raising events. Reservations to use the Library are made at the front desk. In addition to the elevator, a staircase on the first floor leads down to the large basement-level theater. The fourth floor has numerous Macintosh computers, used by visitors to scan titles in the collection. When a selection is made, a visitor is given a print-out of three choices and then takes the stairs to another floor, the Console Center, where TV monitors with headphones are separated into modular units. Visitors have control over playback functions. Within that floor is the smaller Scholars' Room, an enclosed area for use by researchers. Tapes are accessed by typing three-digit numbers from the print-out sheets into the monitors, sending a signal to the control room on another floor. Both radio programs and TV shows are sent to the monitors using this system. On another floor, visitors can hear pre-programmed channels in the Ralph Guild Listening Room, named for Ralph C. Guild, Chairman of the Board for Interep, the largest independent national sales and marketing organization specializing in radio, the Internet and new media. In the rear of the Listening Room is the museum's radio broadcasting studio.

The Museum of Television & Radio in Los Angeles at 465 North Beverly Drive in Beverly Hills, opened March 18, 1996 in a new building designed by Richard Meier and named for Leonard H. Goldenson. When the Los Angeles building opened, it featured a collection duplicated from the tapes in the New York collection. Rooms are named for the celebrity sponsors: the Danny Thomas lobby, the Aaron Spelling reception area and the Garry Marshall pool. Screenings are held in the 150-seat John H. Mitchell Theatre. The Ahmanson Radio Listening Room has headphones for use with five pre-programmed channels.

Television and radio shows are added to the collection after archival discoveries and through donations from individuals and organizations. In 2002, the Museum held a showing of the previously unseen rehearsal film of Rodgers and Hammerstein’s Cinderella telecast from March 17, 1957. This rehearsal was found in the CBS vault while the Museum was on a quest for other "lost" Cinderella materials. It had been believed that on the night of the live broadcast the show was preserved on both kinescope and videotape and then transmitted to the West Coast. Seeking either of these, Jane Klain, the Director of Research at the New York facility, asked CBS to search their vaults. The CBS database listed three 16mm films featuring five-minute segments of Julie Andrews performing in the show. When the earliest one was brought from the CBS vault, it was discovered to be the full dress rehearsal.

The Center is also known for its many discoveries involving daytime game shows. Episodes of destroyed shows such as High Rollers, Celebrity Sweepstakes, The Money Maze, the Chuck Woolery version of Wheel of Fortune, To Say the Least, and daytime Hollywood Squares episodes are all available for viewing in the library. Episodes of other game shows such as Tattletales, Let's Make a Deal, and The Gong Show are also in the library.

In 2010, The Paley Center for Media announced a partnership with IESE Business School to offer the Advanced Management Program in Media and Entertainment or the “Media AMP.”

Considered the first of its kind in the industry, the Media AMP is an intensive, postgraduate level program for high-potential media and entertainment executives, who are preparing for the highest level leadership roles in their companies. Launching in January 2011, the program’s goal is to get executives up-to-speed on new business models, management techniques and technologies, and to prepare them to think like CEOs so that they can lead their companies through what are often rapidly-evolving challenges and opportunities in media and entertainment.

A key feature of the Media AMP is the Leadership Forums. Leadership Forums give participants exclusive and unparalleled access to some of the top leaders in the media and entertainment industry. Each Leadership Forum features intimate meetings with industry executives and innovators, both “C-suite” leaders from traditional media companies and innovative entrepreneurs who are redefining the new media landscape.

The Media AMP curriculum covers four modules over a six-month period. Three of the modules are held in New York, and one in Los Angeles. Key discussion topics include: Value Creation; Digital Strategy; Accounting, Finance and Management Control; Content and Customers; Leadership; Production, Technology and Operations Management; Entrepreneurship and Innovation; IT Systems and Strategy; Managerial Economics and Decision Analysis; Marketing Strategy; and others.