Danny Thomas (born Amos Alphonsus Muzyad Yakhoob Kairouz, January 6, 1912[1] – February 6, 1991) was an American nightclub comedian and television and film actor, best known for starring in the television sitcom Make Room for Daddy (also known as The Danny Thomas Show). He was also the founder of St. Jude Children's Research Hospital. He was the father of Marlo Thomas, Terre Thomas, and Tony Thomas.[2] 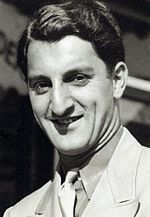 As Amos Jacobs who was working at WMBC radio in Detroit.

Thomas was born in Deerfield, Michigan, to Charles Yakhoob Kairouz and his wife Margaret Christen in 1914 (according to imdb).[3] His parents were Maronite Catholic immigrants from Lebanon.[4] Thomas was raised in Toledo, Ohio, attending St. Francis de Sales Church (Roman Catholic), Woodward High School and finally The University of Toledo, where he was a member of Tau Kappa Epsilon fraternity.[5] Thomas was confirmed in the Catholic Church in Toledo by Samuel Stritch who was bishop of Toledo at the time. Stritch, a native of Tennessee, would be Thomas's spiritual advisor throughout his life and subsequently urge him to locate the St. Judes Hospital in Memphis.[6][7] He married Rose Marie Cassaniti in 1936, a week after his 24th birthday. Thomas first performed under his Anglicized birth name, "Amos Jacobs Kairouz", before choosing the stage name, "Danny Thomas", which were the names of two of his brothers.

In 1932, Thomas began performing on radio in Detroit at WMBC on The Happy Hour Club. After he moved to Chicago in 1940, he went back to performing in night clubs because the salary was better than that of his radio job. Thomas did not want his friends and family to know that finances forced him back into working in clubs, so he decided to invent a name he would use when he worked in them. The result was the name that he would become famous with: Danny Thomas.[8] 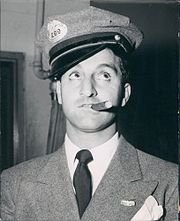 Thomas first reached large audiences on network radio in the 1940s, most notably playing shifty brother-in-law Amos in The Bickersons, which began as sketches on the half-hour music-comedy show Drene Time, co-hosted by Don Ameche and Frances Langford. Thomas also portrayed himself as a slightly scatterbrained Lothario on this show. His other network radio work included a stint as "Jerry Dingle" the postman on Fanny Brice's The Baby Snooks Show, and periodic appearances on the legendary NBC variety program, The Big Show, hosted by stage legend Tallulah Bankhead.

In films, he starred in The Jazz Singer, a 1952 remake of the 1927 original and played songwriter Gus Kahn opposite Doris Day in the 1951 film biography I'll See You in My Dreams.

On January 1, 1959, Thomas appeared with his Make Room for Daddy child stars, Angela Cartwright and Rusty Hamer, in an episode of NBC's The Ford Show, Starring Tennessee Ernie Ford. During his successful 13-year run (1953–1965) on Make Room for Daddy, which was later known as The Danny Thomas Show, Thomas became a successful television producer (with Sheldon Leonard and Aaron Spelling among his partners), working on many popular shows including The Dick Van Dyke Show, The Andy Griffith Show, and The Mod Squad. Thomas also produced three series for Walter Brennan: The Real McCoys, The Tycoon and The Guns of Will Sonnett, all on ABC during the late 1950s and 1960s.

He often appeared in cameos on shows he produced, perhaps the most memorable being his portrayal of the tuxedoed, humourlessly droll alien Kolak, from the planet Twilo, in the classic Dick Van Dyke Show science-fiction spoof, "It May Look Like a Walnut."

In the early seventies, he reunited most of his second Daddy cast (Marjorie Lord, Rusty Hamer, and Angela Cartwright) for a short-lived update of the show, Make Room for Granddaddy. Premised around Danny and Kathy Williams caring for their grandson by daughter Terry, who was away with her husband on a long business assignment, the show barely lasted a season. After this show, he starred in a sitcom on NBC called The Practice, which lasted two seasons before being cancelled.

The last series in which Thomas was a headlining star was One Big Family, which aired in syndication during the 1986–87 season. The situation comedy's premise was set around a semi-retired comedian whose grandchildren were orphaned after their parents were killed in a car accident.[9]

A generous philanthropist, Thomas founded the St. Jude Children's Research Hospital in Memphis, Tennessee, with help from Dr. Lemuel Diggs, in 1962. The hospital has treated thousands of children for childhood cancers. In 1996, Peter Doherty, Ph.D., of St. Jude Children's Research Hospital, was the corecipient of the Nobel Prize in Physiology or Medicine for his work on how the immune system kills virus-infected cells.[10] As a "starving actor" Thomas made a vow: If he found success, he would open a hospital dedicated to St. Jude, the patron saint of hopeless causes.

Thomas was one of the original owners of the Miami Dolphins, along with Joe Robbie, though he sold his share soon after purchase. He was also an avid golfer. He claimed a ten golf handicap and once competed with Sam Snead in a charity event.[11] Thomas developed a close relationship with the PGA Tour, and two PGA tournaments bore his name: the Danny Thomas-Diplomat Classic in south Florida in 1969 and the Danny Thomas Memphis Classic from 1970 to 1984.

Thomas's children are also performers, the most famous being his daughter Marlo, who is married to Phil Donahue. His son, Tony Thomas, is a television producer. Daughter Terre Thomas is a former actress.

He was also the son-in-law of Marie "Mary" Cassaniti (1896–1972), a drummer and percussionist. According to Marlo, her grandmother (on her mother's side) had a band called Marie's Merry Music Makers.[12]

A devout Roman Catholic, Thomas was awarded a papal knighthood by Pope Paul VI. He was named a Knight Commander of the Order of the Holy Sepulchre in recognition of his services to both the church and the community. President Ronald Reagan presented Thomas with a Congressional Gold Medal honoring him for his work with St. Jude Children's Research Hospital. According to tradition, he was the first non-Jewish member of the Hillcrest Country Club in Los Angeles. 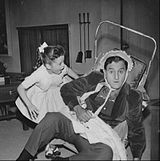 Angela Cartwright played the role of Danny Williams's stepdaughter, Linda Williams, between 1957 to 1964, for 170 episodes. The on-and off-screen chemistry of Thomas and Cartwright was a instant success story of 1960s television. Angela said when asked if she thought he was playing second-fiddle to other actors who later played the role of TV dads, years after him, such as Chuck Connors, Bill Bixby and Michael Landon: "I don't think so, I don't think Danny was really thinking about anybody else's series, at the time. I don't know if he reflected on just how much of the big snowball he started in family television. We shot The Danny Thomas Show at Desilu Studios, which was where Lucille Ball was doing I Love Lucy, which of course is iconic. We had a lot of people on our show with over spin-offs, into their own series: It was Danny Thomas and Sheldon Leonard [that had a production company together] and we had on our show, Andy Griffith; and that was the spin-off to Mayberry. Andy was the sheriff that arrested Danny when he went [and I'd forgotten what he'd done, he'd done something in this little town of Mayberry, and so, he was arrested]. Let's see, The Joey Bishop Show was a spin-off from an episode that Joey Bishop was in. There was just Bill Bixby, but I think Bill Bixby just became a STAR playing the grocery guy on our show, I think he was picked up for some series, but there were a lot of spin-offs in two different comedy shows, and comedy was really needed at that time. The 1/2 hr. sitcom that was just your whole family could sit down and watch, it was really enjoyable though, Danny had a big part in that in the beginning of [what I like to call] instead of old TV classics."

After her first successful run in the series, she later went on focus on other projects, while gaining greater fame, as a teen actress, in the popular 1960s sci-fi television series, Lost in Space After the cancellation of Make Room For Granddaddy in 1971, Angela continued to either visit or stay in touch with her TV father. Mary's (Danny's real-life's mother-in-law's) death in 1972, which followed the suicide of Rusty Hamer (co-star with Thomas and Cartwright on The Danny Thomas Show, eighteen years later), those two deaths became closer between Thomas & Cartwright, as they both delivered their condolences to a relative just years before a co-star, exactly one year before Thomas's own death.

Danny Thomas was responsible for Mary Tyler Moore's first "big break" in acting. In 1961, Carl Reiner cast her in The Dick Van Dyke Show, an acclaimed weekly series based on Reiner's own life and career as a writer for Sid Caesar's television variety show, telling the cast from the outset that it would run no more than five years. The show was produced by Danny Thomas's company, and Thomas himself recommended her. He remembered Mary as "the girl with three names" whom he had turned down earlier. A lengthy search by Thomas through Hollywood photos and records "found" the girl with three names.

Thomas died on February 6, 1991, of heart failure one month after his 79th birthday. He had completed filming a commercial for St. Jude Hospital a few days before his death and this final commercial aired as a tribute to him.

Danny Thomas is interred in a crypt in a mausoleum on the grounds of the St. Jude Children's Research Hospital in Memphis. He was a posthumous recipient of the 2004 Bob Hope Humanitarian Award.